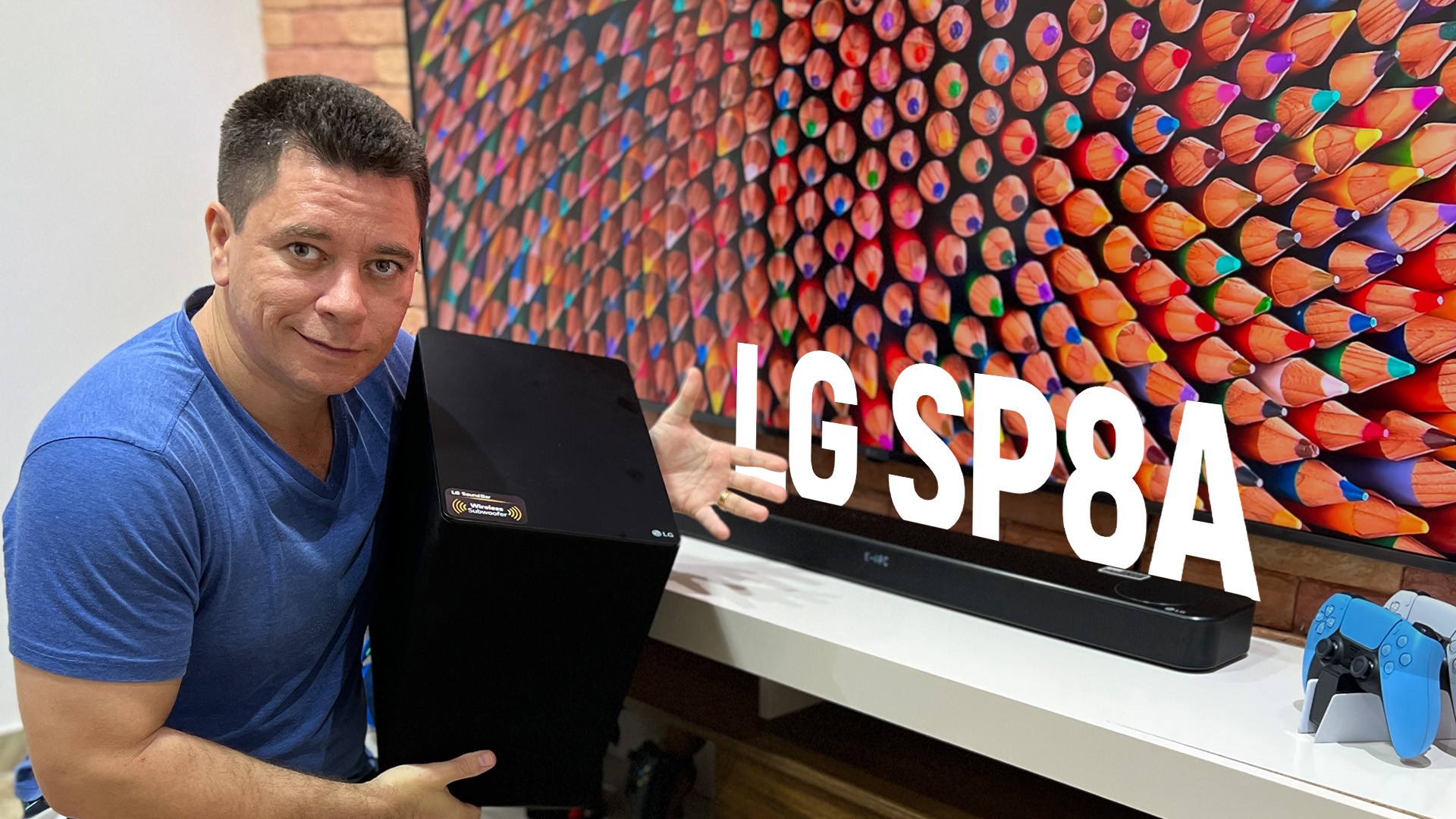 TudoCelular tested LG’s SP9A soundbar a few months ago and we saw a powerful sound system for those looking to boost their TV sound with an immersive 5.1 channel experience. Now we have the lower SP8A model, which brings two less channels, but still with the promise of cinema sound for your home. What changes between the two? Does this delivery better value for money? Let’s check.

LG decided to keep the design of the SN8YG, its mid-range soundbar from the previous year. The new one follows the same measures, being 106 cm wide by 12 cm deep and 5.6 cm high. It is smaller than the SP9A which is aimed at 55-inch TVs, while the SP8A would be the perfect companion for a 50-inch TV.

Most of the soundbar is made of good quality hard plastic. The front piece that extends to the sides is made up of a metal grille that hides the display and main speakers. At the top we have two small circular grilles that protect the speakers responsible for Dolby Atmos. 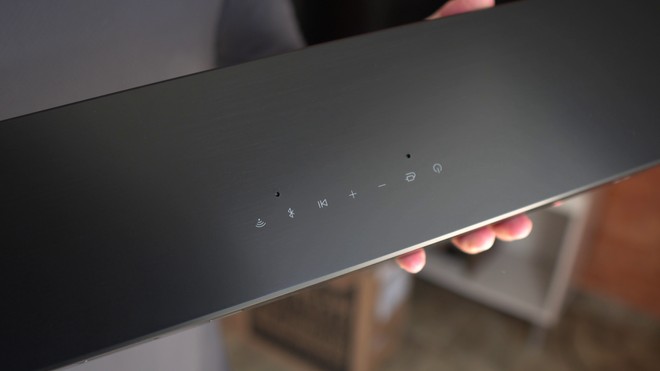 All control buttons are located at the top of the soundbar and allow volume adjustments, music player control, Bluetooth connection, Wi-Fi, signal input switching and turning the device on and off. All of them are touch sensitive and respond well to even the lightest touch.

On the back of the soundbar we have two HDMI ports, one for connecting other devices and passing the sound through the soundbar, like a console; while the other is output with eARC support for you to connect to your TV. There is also an optical and a USB input for reading files or manually installing firmware. 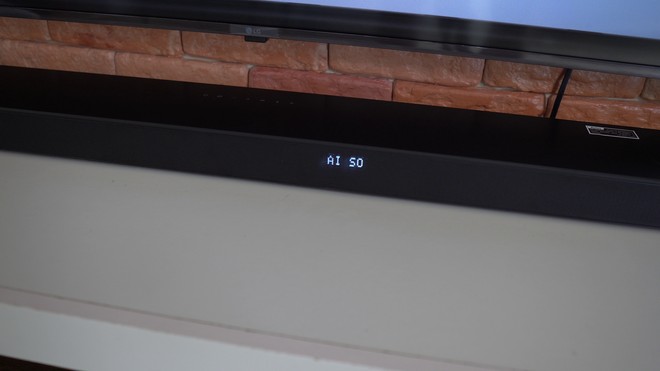 The subwoofer is the same as other LG soundbars, including the SP9A and SN8YG. It is 39 cm high, 22.1 cm wide and 31.2 cm deep. It’s about the size of a compact PC. The top and back are made of the same hard plastic, while the front and sides are covered in fabric.

The subwoofer connects to the soundbar via Wi-Fi. While the bar itself can also connect to LG TVs without the need for cables or using the optical audio cable that comes with the product or an HDMI purchased externally. In addition, LG sends the wall mount, the battery-operated remote control and the configuration manual in the box. The SP8A consists of six speakers that deliver 440W of power in total. On the front of the bar we have the left, central and right channels, while at the top there are two more responsible for Dolby Atmos. Rounding out the package is the subwoofer for a 3.1.2 channel sound system.

What changes for the superior model SP9A is that in this one there are not the two side speakers that give a greater sound amplitude. So you lose that feeling that there are elements scattered around your room in an action scene and feel more the sound coming from in front of you.

Furthermore, the sound quality on the SP8A is slightly lower, but it still delivers quality sound that goes far beyond what any TV speaker is capable of delivering. LG has a habit of calibrating the sound by weighing more on the bass. Anyone who enjoys action movies or electronic music will appreciate the firm thumping of the subwoofer. LG solved the distortion problem when the volume is at maximum on the SN8YG and in the new we have a cleaner and more defined audio at any volume. The center channel has also been improved to reproduce clearer dialogue, but Dolby Atmos has been sacrificed and some of that overhead sound sensation has been reduced.

There are dedicated sound calibration profiles for voice-focused programs such as news as well as games and sports. The SP8A also has real-time calibration done by the help of artificial intelligence. It analyzes the space in your room to correct bass, mid and treble reproduction.

There is also support for services like Apple AirPlay, Alexa, Google Assistant, Spotify and Chromecast. The SP8A also supports 24-bit, 192 kHz high-resolution audio for the most demanding music player in high fidelity. And for those who prefer DTS:X technology, it is present as an alternative to Dolby Atmos. LG has overhauled the remote compared to what came with the previous generation. It is more compact and has lost the button dedicated to Google’s voice assistant. The top is made of matte plastic, while the bottom has a glossy finish. There are few buttons that give access to the main features of the soundbar.

You can also control all the features of the SP8A through the LG Sound Bar app which is available for Android and iOS. There’s an equalizer to make the sound as you want, and you can adjust the volume of each speaker and calibrate the audio according to your environment with AI Room Correction.

The small screen that is hidden under the front grille always shows any changes you make to the soundbar’s volume or settings. It is a very simple LCD display that presents some information in abbreviated form. So some may find it more interesting to make the adjustments through the mobile app. 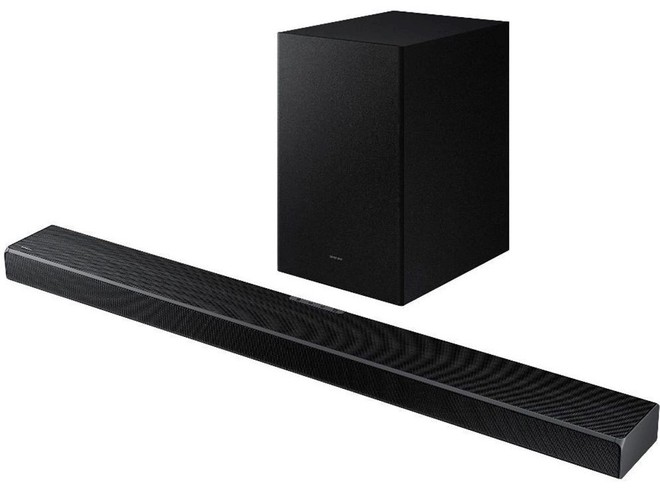 The SP8A soundbar is sold for R$ 2,500 by LG. Worth the Price? Its biggest rival in Brazil is Samsung’s Q600A, which currently sells for around R$2,000. The one from LG delivers better sound quality and comes fuller of technologies absent in the rival, which ends up justifying the difference in price you will pay for it.

And compared to the SP9A, which one delivers the best value for money? The superior model has two speakers on the sides that give greater amplitude to the soundstage and give a feeling of greater immersion, although it is not the same thing as having dedicated speakers behind the sofa. The small differences between the two are not enough for the extra amount of almost R$ 1 thousand to be paid.

The SP8A soundbar is a great sound system option to boost the audio of any TV, from the simplest to the latest 8K. For those looking for an option focused on good value for money, this is one to consider. It offers almost everything the top model does and costs considerably less.

It’s just a shame that LG doesn’t sell the extra boxes to enable surround in Brazil. That way we would have a much more immersive sound for movies and games.