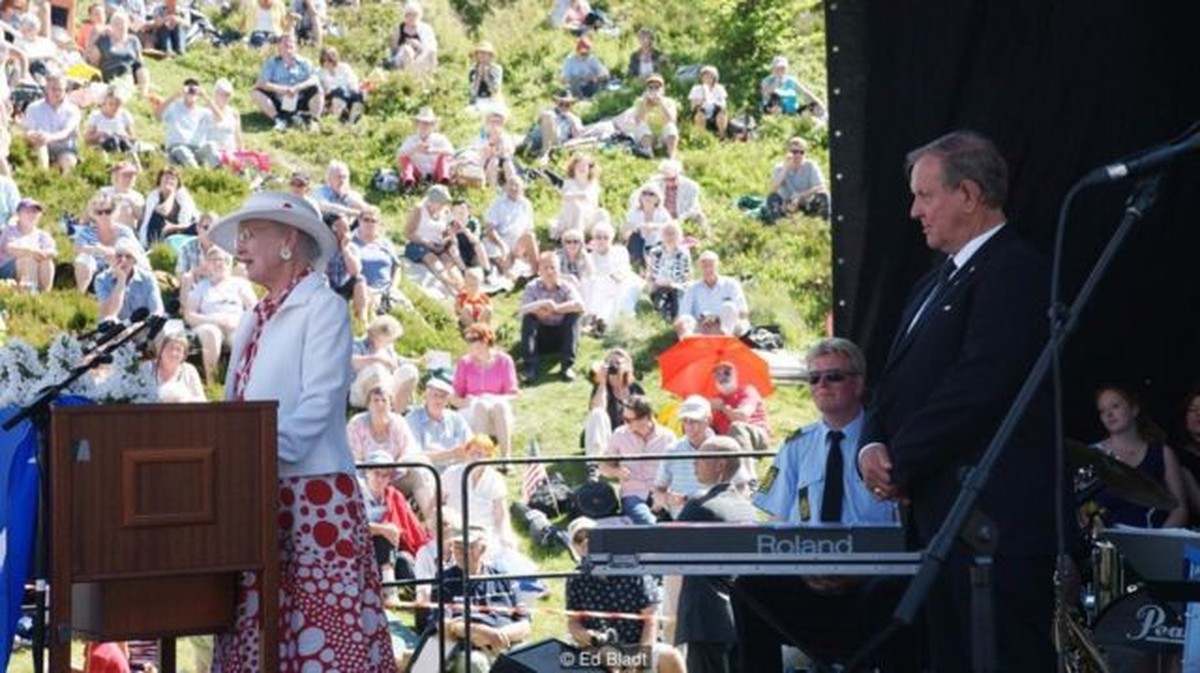 4th of July: Why Denmark’s Park Celebrates US Independence | World

It was the Fourth of July, and I was watching the American flag fly by men in uniform as a country music singer in a cowboy hat and boots played the national anthem.

The scene was followed by a moment of prayer, asking God to bless the President of the USA. It was the cue for the band formed by members of the US Army to start playing the patriotic song God Bless America, and everyone singing together in one voice.

If I were anywhere in the US on Independence Day, this scene might make sense. But I was about 7,400 km away, in the mountains of northern Denmark. And there the passion of the American dream mingled with the Danish hygge — a local term that describes the feeling of comfort and warmth — of a typical family picnic in the park.

It’s the Rebild Festival — arguably the biggest celebration of Independence Day outside the US. The unlikely celebration has attracted thousands of people dressed in red, white and blue since 1912 to the region of Rebild, a municipality about 30 km south of Aalborg, Denmark.

But why Denmark? This is a story that harkens back to a time when leaving Europe for the US meant saying goodbye to friends, family and country — often forever.

In the late 19th and early 20th centuries, there was a mass exodus of Danes to the US. These emigrants left in search of better living conditions and after the Mormons, an American religious movement that led thousands of Danes to convert.

The Rebild National Park Society, the Danish-American group that organizes the Rebild Festival, estimates that around 300,000 people left Denmark for the US by 1912.

“Many left Denmark in difficult times. They came to America, and some took that freedom and opportunity to be somebody in life, and they felt very proud and grateful to America,” explains Niels Voigt Guldbjerg, president of the Danish American Club in Denmark, who has lived in the US for 32 years. .

“They were so far away back then that when they came back to Denmark, it had a bigger meaning, and they loved America so much because the US had given them the opportunity they didn’t have in their country.”

One such emigrant was Max Henius, a Chicago-based biochemist who founded the successful American Brewing Academy, teaching the art of European-style brewing to local brewers before Prohibition took effect in 1920.

If returning to Denmark was a rare, expensive and time-consuming journey (several weeks by ship) for these migrants, those who made their fortunes abroad were particularly motivated to return and recognize both the importance of their origins and the opportunities that the US had provided them.

It was this group of “New Americans”, led by Henius, who purchased an 80-hectare plot of land in northern Denmark to serve as a welcome place for all Danish-Americans. They donated the land to the Danish King Christian 10th, who in turn created the Rebild Bakker (Rebild National Park) as a natural haven for all Danes. But the donation came with a counterpart.

Every year, Henius insisted, the park should hold a festival celebrating US Independence Day, as a symbol of friendship between the two countries. The national park would also serve as a place where returning Danish Americans could always feel at home, whether meeting with relatives still in Denmark or celebrating the American dream with friends who have followed the same path.

The result, today, is a hodgepodge of traditions that contemplates the Danish passion for singing and aquavit, a distilled drink of Scandinavian origin.

When it opened in 1912 in the rain, the Rebild Festival brought more than 10,000 people to the park — with 1,000 taking a long journey by ship from the US to celebrate its origins, according to the Rebild National Park Society.

Today, the festival of friendship has turned into a nearly week-long celebration of get-togethers, galas and ceremonies throughout the Rebild region, which continues to strengthen the ties that unite the two countries. It’s a place where all interested people in the US, whether they’ve been there or not, can come together and celebrate.

At the opening luncheon on July 4, 2019, I met Helle Agerbak Lyngaa, a 52-year-old festival fan who was dressed from head to toe in patriotic trappings, highlighted by her head bow with the American flag and T-shirt with the American flag. “Made in America” ​​inscription — although it is 100% Danish.

She sat at my table and soon became friends with whoever was sitting around us: a bunch of newcomers; a man who has attended the event every year since 1948; and three generations of Danes passionate about the Rebild Festival.

“You need to find some soulmates, which is what we do here,” she says.

“[O almoço] it’s the main thing, the icing on the cake,” adds Lyngaa, who has attended the festival since the age of five and is a long-time member of the Danish American Club and the Rebild Society.

“But I think all the other events [nas semanas que antecedem o festival de 4 de julho] just as important, because that’s when you can make friends.”

“This has a lot to do with tradition. Many Danish-Americans who return home are looking for memories — and they come because they yearn for what they left behind. There is still this yearning for tradition,” he adds.

Lunch, a two-hour feast of typical Danish dishes such as pickled herring, smorrebrød (a kind of open sandwich) and Aalborg (a distilled beverage), was marked by toasts, songs and a bit of formality as a group of Americans and Local dignitaries were honored for their contributions to the festivities.

“There was a time in the US when people weren’t that interested in their origins and cultural heritage, and they tried not to speak their native language at home,” says American Ed Bladt, president of the Rebild in the Delaware Valley.

Although he lives in the US and is an American, Bladt is married to a Dane, speaks Danish at home, and the first words his children and grandchildren spoke were “skål”, a greeting given when toasting, such as “cheers”.

He was honored last year with several awards, including being proclaimed mayor for a day of Aalborg, Henius’ hometown, in recognition of his efforts in promoting Danish-American relations.

Now, says Bladt, there is renewed interest in cultural heritage, perhaps because of the presence of technology that makes it easier to maintain strong connections.

“When you arrive in Denmark, everyone wants you to visit them, and you don’t always get to because there are so many people, so we go to Rebild,” says Bladt.

Although the 2019 event was cold and wet, hundreds of people walked out of the lunch tent and up the American flag-marked trail to the main attraction in the park’s hills.

We were greeted with the raising ceremony of the US and Danish flags and a prayer in Danish emphasizing the ties between the two countries. Other speeches followed, between chants of traditional Danish songs and a rendition of God Bless America.

The scene was surreal. I was standing in front of the American flag, while shivering under a deluge. But for the Danes, as for those who attended the first edition of the festival, that was nothing. There is a popular saying in Denmark: “There is no such thing as bad weather, only bad clothes”. And that’s what I found, since there were about a thousand people at that outdoor event after lunch in the park.

While attendance may have declined since Henius’ time — attracting approximately 2,000 people in sunny years, and 7,500 on the event’s 100th anniversary in 2012, according to Rebild National Park Society Secretary General Lars Bisgaard — the passion for all things American remains strong.

“I think culture is, in a way, like fashion. In 20 or 30 years, trends change, and I think they come back, it’s just a matter of attracting people,” says Lyngaa.

“I believe that Rebild [National Park] Society will still be present for the next 100 years, maybe not in the same way and in the same format, but we will always be around. We crave the adventure of the American dream, and Americans crave their tradition and roots in Denmark. That will always be there.”

Read the original version of this report (in English) on the BBC Travel website.

This text was originally published in https://www.bbc.com/portuguese/vert-tra-52924460