Almost 1 month after Finland and Sweden submitted their membership applications, NATO (North Atlantic Treaty Organization) formalized, on Wednesday (29.jun.2022), the invitation to the 2 countries to join the group. The measure represents an advance in the process although the candidacies still need the approval of the parliaments of the 30 countries of the military alliance.

At various times, Russian President Vladimir Putin and his government expressed dissatisfaction with the expansion of NATO in neighboring countries. Putin even used the issue to justify the start of the invasion of Ukraine on February 24.

According to the Russian leader, the entry of nations threatens Russia’s security, as the country will be surrounded by NATO not only by land, but also by sea.

That’s because Russia has 2 strategic exits to the Baltic Sea, an important navigation route to the Atlantic Ocean and access to Saint Petersburg, the 2nd largest city in the country. They are: the port of Saint Petersburg and the Russian enclave of Kaliningrad.

The last territory lies between Lithuania and Poland. It used to belong to Germany, but it has been under Russian control since its takeover by Soviet troops in 1945, during World War II. The enclave acts as the headquarters of the Russian Navy’s Baltic Fleet.

Like Russia, NATO also has strategic access to the Baltic Sea through Germany, Denmark, Estonia, Latvia, Lithuania and Poland. With the entry of Finland and Sweden, other coastal nations, Russia will be the only country outside the military alliance in the region and NATO will have control of most of it. 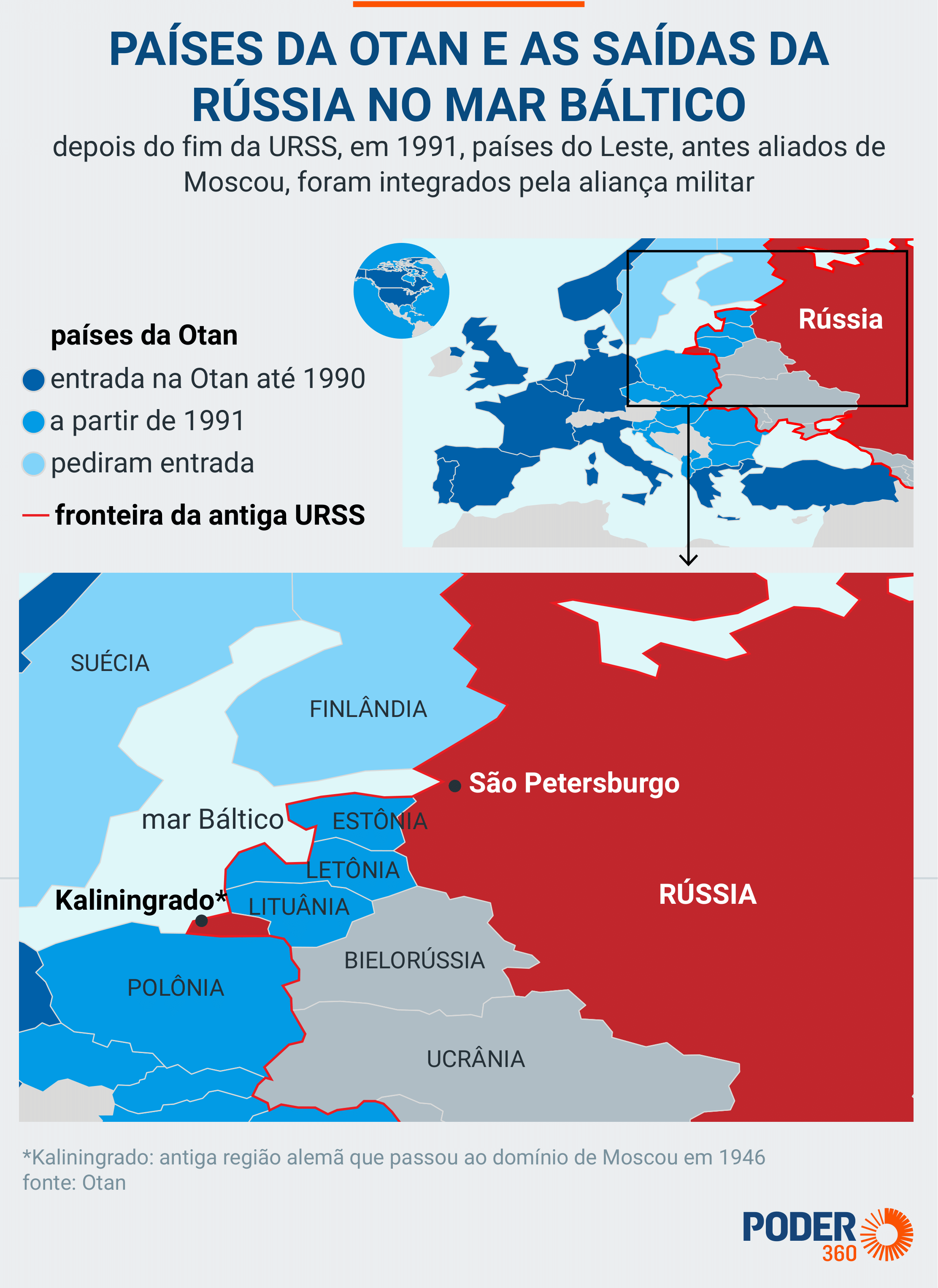 Last week, a new front of tension in the relationship between Moscow and the military alliance was created. Lithuania, a member of NATO, has banned the transit of some goods from Russia to Kaliningrad by rail.

The Lithuanian blockade has been applied to products sanctioned by the EU (European Union). It therefore affected the transport to the Russian port of metals, coal, building materials and high-tech products.

Russia has vowed to retaliate for what it described as “hostile actions” of Lithuania and warned of consequences of “serious negative impact” against the Baltic nation.

With this scenario, the question that arises is whether the already strained relationship in the Baltic Sea will be even more tense with the entry of Finland and Sweden. In an interview with Power 360experts evaluated the case.

According to Augusto Teixeira, professor of International Relations at UFPB (Federal University of Paraíba), “there is a tendency towards greater tension” in the region. The specialist explained that by sea having a closed geography this favors processes of naval closure or blockade. This possibility could be the reason for the escalation of the crisis between Russia and NATO.

“This increased NATO presence signals that, if Russia wants to expand its offensive action against other NATO countries by sea, in this case, the Baltic, this will be hampered by the alliance’s presence and prompt response in this region.”said.

Teixeira assessed, however, that the duration of the war in Ukraine is a “important factor” to be included in the analysis. For the teacher, the war “tends to end” before effective accession.

“We don’t really know how long the conflict will last. What we can put in comparison is that it is more possible for the war to end before Sweden and Finland join NATO because the accession processes are very long. It’s not something you do in 3, 4, 5 or 6 months. It usually takes years.”said the expert. 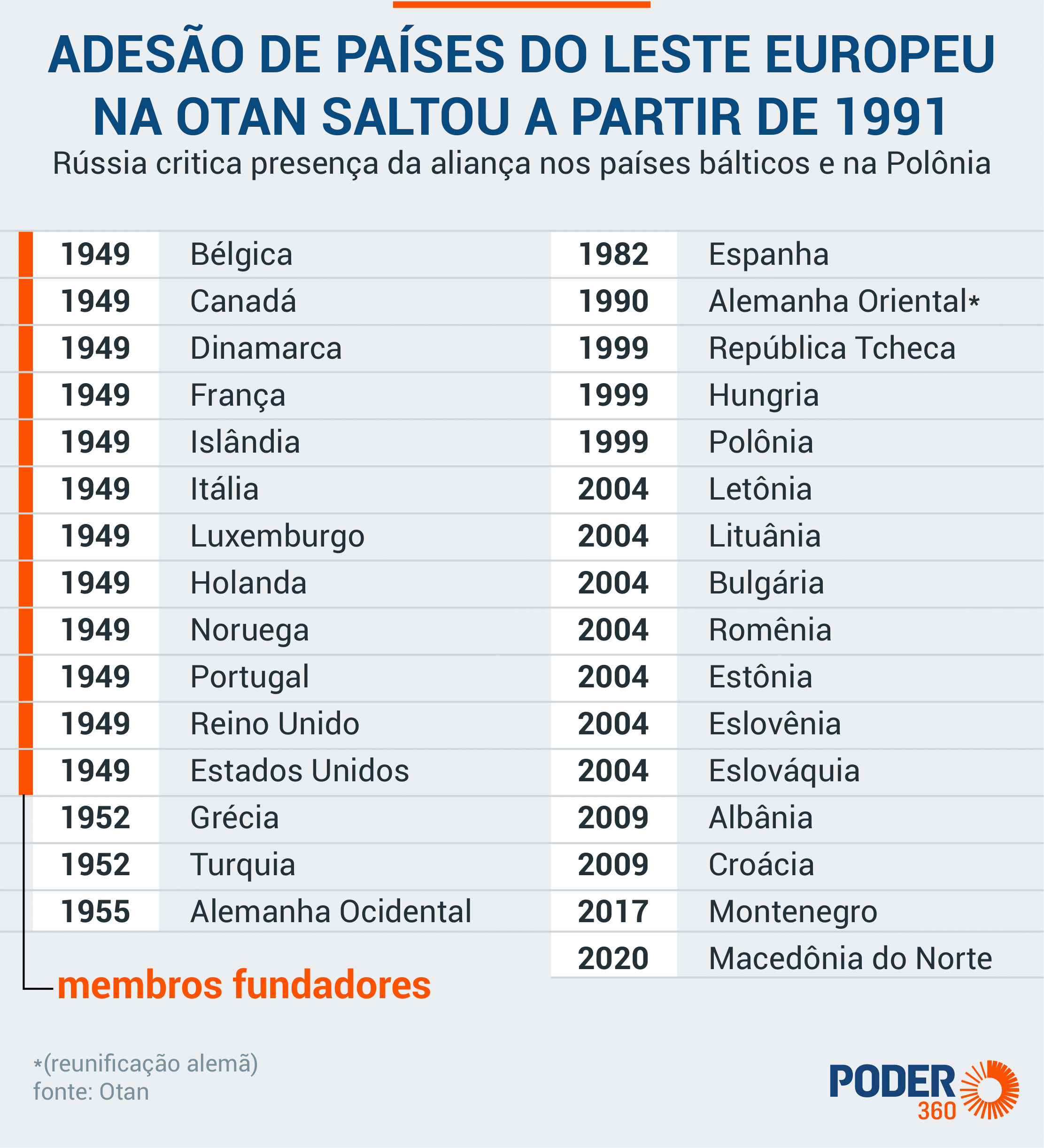 The professor of International Relations at USP (University of São Paulo), Kai Enno Lehmann, says that it is difficult to worsen the situation between NATO and the Kremlin, since relations between the two are “at the worst level since the beginning of the Cold War”.

“I don’t see how she [a relação] can get worse unless there is really an attack from one side against the other. But I don’t see that happening.”he said.

Lehmann also analyzed that Russia would not lose access to the Baltic Sea, as the country has the right guaranteed by international law. However, Moscow may lose its ability to act in the area.

“What obviously changes is the scope for action that Russia has [no mar] geographically because it now shares borders with NATO in the Baltic Sea. With that, I believe that Russia’s room for maneuver to risk something is very narrow.” said the teacher.

For the doctor in military sciences, Sandro Teixeira Moita, the Baltic Sea region will be “undoubtedly” a possible focus of tension in the coming years. According to the expert, it may even be that the situation on the ground gains global attention that it did not have before.

“It could become a focus of tension in post-war Ukraine or even during the war depending on the duration of the conflict, with the Russians placing nuclear weapons in that area to deter any NATO action.”said.

Moita also analyzed that, with the entry of Finland and Sweden, NATO forces in the Baltic Sea will have a capacity gain in the region, especially knowledge.

“The navies of the Baltic States [Estônia, Letônia e Lituânia] are practically irrelevant, but the Swedish Navy and the Finnish Navy are forces that, although not very large, are competent, adapted and know the area. In addition to always preparing for an eventual conflict there”said the expert.

During the month of June, NATO countries, Finland and Sweden carried out joint training in the Baltic Sea. The most recent was Baltops 22. The event, which ended on June 17, brought together more than 45 ships, 75 aircraft, and 7,500 troops.

The Russian fleet also conducted military exercises in the Baltic Sea, having completed 10 days on June 19th. The training was attended by 60 warships, 10,000 military personnel and 45 aircraft.

Although both are regular, the events held in the current tense scenario due to the war in Ukraine mean much more than simple training of forces and military equipment in the region.

According to Augusto Teixeira, the exercises have a symbolic meaning. they demonstrate “the ability to project power” of the military alliance and seek to have a “deterrent or coercive effect” about Russia.

“The increase in naval assets and the demonstration of NATO’s capability in the Baltic Sea undoubtedly deepens Russia’s sense of insecurity, especially in the region of the Kaliningrad enclave”says.

Similarly, Professor Kai Enno Lehmann assessed the exercises as a way for NATO to show strength. Also according to him, the success of the exercises are important for the military alliance.

“NATO has to send a signal to its members, to the neighborhood, that the organization is prepared for any eventuality. These exercises in the Baltic Sea also give a very clear ‘we are here’ signal to Finland and Sweden.”said.