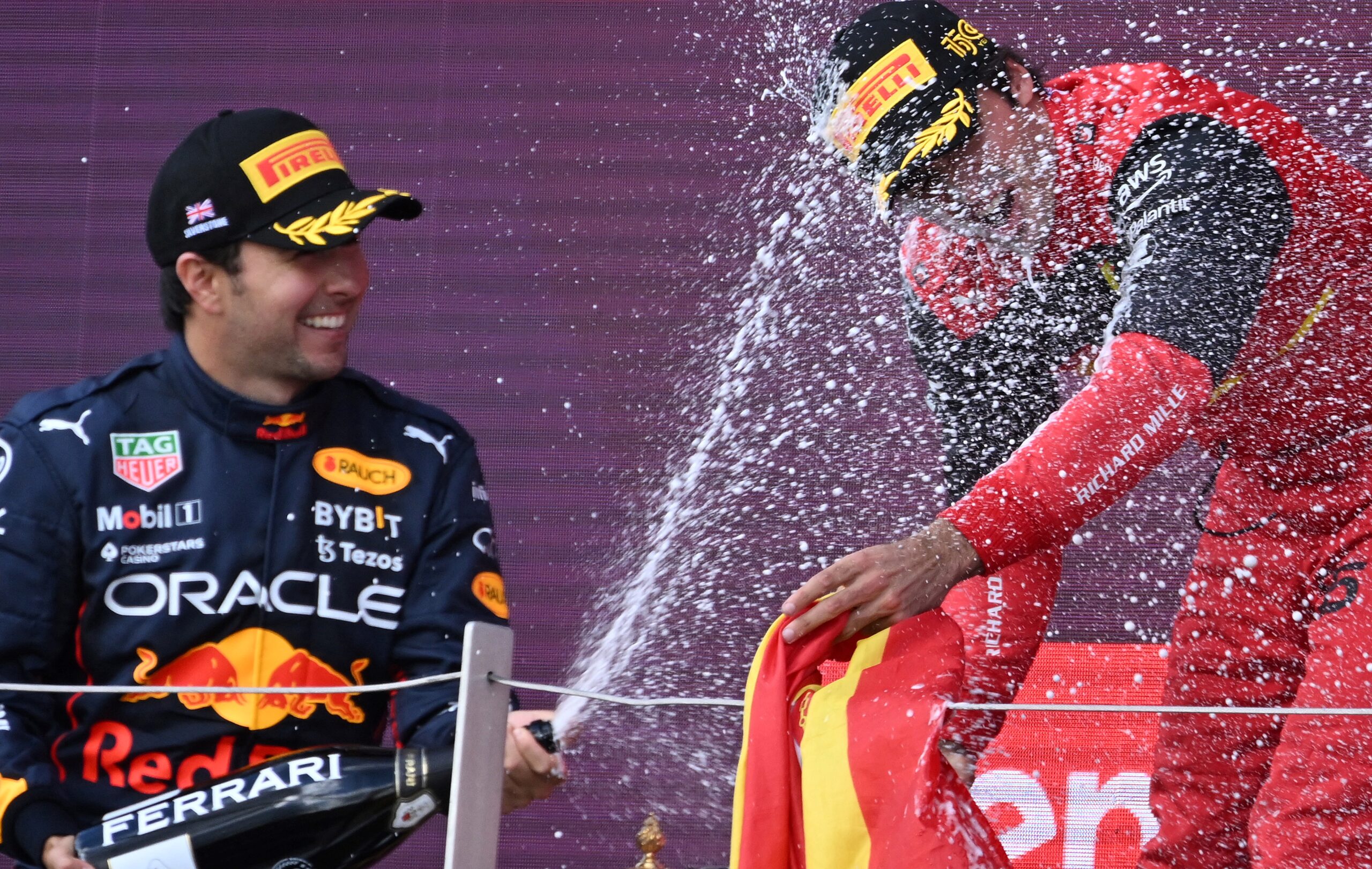 Formula 1 witnessed this Sunday (3) the best race of the 2022 season so far. The British GP lived through everything possible: a strong accident, a fight for victory, beautiful overtaking and the title candidates far from the podium. The victory was won by Carlos Sainz, who took advantage of a providential safety car in the final part of the race. It was the Spaniard’s first triumph in the biggest of motorsport’s categories.

Sainz celebrated his success by sharing the podium with Sergio Pérez and Lewis Hamilton. The Mexican starred in a beautiful recovery test, after his car was damaged in a collision with Charles Leclerc on the first lap. Mercedes’ Englishman, on the other hand, raised the crowd with a combative performance. Hamilton even fought for the victory.

Leclerc, betrayed by Ferrari’s poor strategy, finished fourth, followed by Fernando Alonso and Lando Norris. Championship leader Max Verstappen faced problems during the race and was only seventh. Still, he added important points in the fight for bi. The scoring zone also had Mick Schumacher, Sebastian Vettel and Kevin Magnussen.

The British stage was hectic and highly disputed, but also marked by a serious accident at the start. Alfa Romeo’s Guanyu Zhou was hit by George Russell, who had been played before by Pierre Gasly. Because of the speed, the Chinese car flipped over and flew under the tire barrier. The pilot suffered nothing, largely due to the halo. Alex Albon was also involved in a crash with Vettel and retired. But he had to visit the hospital just in case.

Check out what the F1 drivers had to say about the British GP below:

CARLOS SAINZ, WINNER: Sainz says he “believed until the end” in victory in England and highlights duel with Hamilton

LEWIS HAMILTON, THIRD: Hamilton praises Mercedes for podium in England: “We are closer to rivals”

LANDO NORRIS, SIXTH: Norris regrets McLaren mistake that cost him 5th place in England: “We gave away for free”

MICK SCHUMACHER, EIGHTH: Schumacher celebrates first points in F1: “I can focus on what matters now”

KEVIN MAGNUSSEN, TENTH: “I don’t think we could have hoped for more. I think in the first stint we didn’t have a great rhythm, at least compared to the second stint — where we found the rhythm. I lost a few positions in the first stint annoyingly, because then we had the safety car at the end. We got the request to stop both cars, but I made the decision to stay on track – I don’t know if it was right or wrong – but if it was the wrong decision, that’s what I made. With two cars in the points, however, you have to be happy with that: getting a good amount of points at this stage of the year is very good. We will leave here with a big smile on our faces and with great motivation for the races to come.”

LANCE STROLL, 11th: “I think we had a reasonably positive race. The cars showed a much better pace than yesterday, so it’s a shame I couldn’t score some points. We are still learning and understanding the updates, but based on today’s race I see potential for the next races. I’m happy for [Guanyu] Zhou and Alex [Albon] be fine after the hit at the start.”

NICHOLAS LATIFI, 12th: “From the first lap, we were struggling to move up in the field. At first I was surprised at how much I could keep up with the cars ahead, but in reality there was a little ‘train’ with DRS activated that was keeping me there, because the cars behind were so much faster. It felt really good to actually run the race in the middle of the cake. Unfortunately, we didn’t have the pace at the end and I had to manage the car at the end. The car is lacking in downforce compared to the others, so we were wasting time in the high-speed corners – not helped by some floor damage today. We fought, but it wasn’t supposed to be today. It’s frustrating at the end, but overall it was a positive weekend.”

DANIEL RICCIARDO, 13th: “Firstly, I’m happy to hear that the drivers are doing well after that first lap crash. Relative to our race, the car just didn’t seem to operate with the same level of grip as the others. I could feel it in the tires when trying to charge up speed. It was a little weird, so we have an investigation to do. Then we had a problem with the DRS, which meant I couldn’t use it after lap 31 – which was also a shame. Obviously, it’s tough to overtake with all that, but we just weren’t fast enough today. It was a bit of a lonely afternoon.”

YUKI TSUNODA, 14th: “It was a difficult day. The accident at the start was inevitable, a car passed in front of me and I couldn’t do anything. Luckily, I only damaged the front wing and managed to get back to the pits with the red flag, lining up again at the restart. Unfortunately, a little later, Pierre [Gasly] and I touched. I have to review the images, but at the moment I think I could have waited for another opportunity to get over him. I was fast at the entrance of the turn and I thought I could pass him, but I didn’t expect Pierre to close the door. It was my mistake and I especially want to apologize to the team. At that moment, my car had some damage that made the rest of my race very difficult.”

STEBAN OCON, 15th: “The most important thing to take away from this race is that Zhou is doing well after that horrible crash. It happened right in front of me and I was lucky to avoid most of it, but then I suffered damage to the right side of the car on contact with Alex. [Albon]. I have to say, they did an amazing job fixing the car and getting ready for the restart, so thank you and congratulations to them. [mecânicos]. We did well in the restart and the pace was good. A fuel pump problem on lap 38 ended our race unfortunately and we had to recall the car. After all, it was not a smooth weekend, with some problems in Q2 and today during the race. So we need to look at all of this more closely. It was a very learning weekend, and I’m happy for the team, with a solid score from Fernando [Alonso].”

PIERRE GASLY, 16th: “After a difficult start to the weekend, we managed to improve the situation in the standings a little bit. After the restart, I was on my way to a very good seventh place. But after the accident with Yuki [Tsunoda], my rear wing was damaged and we had to remove the car. Every point is precious, especially in a season like this, so I’m disappointed in this result because it was an avoidable accident. The crash of Zhou’s crash at the start of the race was frightening, it was shocking to see him upside down, but I’m glad to hear he’s okay. That’s the most important.”

VALTTERI BOTTAS, 17th: “First and foremost, the main thing today is that Zhou is doing well. It was a strong crash, and I am relieved that nothing serious has happened and that he has already been cleared by the FIA. Today, we have further evidence of how the Halo is one of F1’s great innovations and how much safety has increased in recent years. Regarding my race, we had a lot of opportunities after the restart, but we had a problem with the gearbox – so I had to stop to avoid further damage. It was unfortunate because we had a good pace and could have scored a lot of points. Even though it was a tough weekend, we can still take some positive points: the pace we showed on the track was a good sign, and I think we can be competitive in Austria next weekend.”

ALEXANDER ALBON, ABANDONMENT: Albon celebrates that “we’re all fine” after heavy crash at the start at Silverstone

Previous 4th of July: Why Denmark’s Park Celebrates US Independence | World
Next How did pandas become herbivores? Discovery reveals the mystery – 03/07/2022