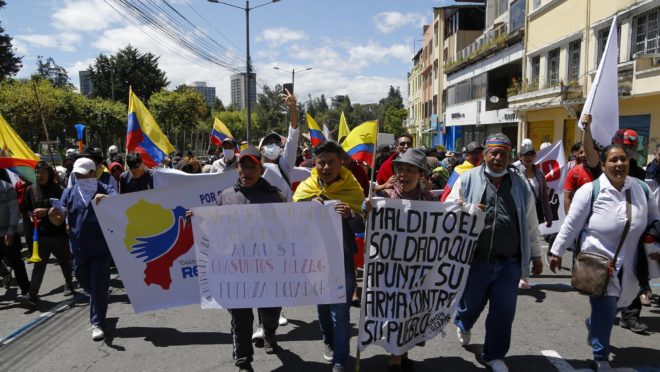 Protests in Ecuador last week nearly ousted center-right president Guillermo Lasso, who was saved from an impeachment process called by lawmakers allied with former president Rafael Correa and linked to indigenous movements because he was short of just 12 votes.

Although there have also been protests in Peru and Argentina, where there are leftist governments, the right seems more cornered in South America, with the recent electoral victories of leftists in Chile and Colombia, the siege of Lasso in Ecuador and Bolsonaro. in Brazil.

The government of Ecuador and the indigenous movement reached an agreement on Thursday (30) to end the protests that had lasted 18 days, but in a country where other large demonstrations have been held recently, this truce is far from representing relief for the population. Lasso management.

For the Venezuelan José Gustavo Arocha, a specialist in national security and a master in public administration from Harvard University, the modus operandi of the protests in Ecuador was the same as the demonstrations carried out in recent years in the country itself and also in Chile and Colombia: using legitimate, such as loss of income and quality of life (in the last two years, in a context of a pandemic), to embody illegitimate narratives.

“There is systematic violence in these protests, to make the public force commit excesses and, if there are people injured or dead, to take them as martyrs and use this to say that state institutions do not work, they do not serve, which generates new waves of protests that have the function of delegitimizing the government of the moment”, explained the expert, in an interview with People’s Gazette.

Arocha believes that, as in Venezuela, the objective is to implement a model he calls criminal peace, in which parastatal institutions take power in the vacuum of the state and control populations on all fronts, from security to food distribution.

“It is a criminal peace because it is a peace that comes from social control, there is no one to complain to, because there are no institutions. It’s like collectives, paramilitary organizations, guerrillas, drug traffickers do”, described the expert. “The poorest remain poor and are not trained to get out of this situation.”

Guillermo Lasso directly accused Correismo for the attempt to remove him based on the protests of recent weeks.

“We are all witnesses to the attempt by Unes [União para a
Esperança] to attack democracy, to take advantage of the chaos to destroy institutionality in Ecuador,” Lasso said in a video message posted on social media.

José Gustavo Arocha knows the Venezuelan reality not only because he is from the country, but because he felt the weight of Chavista authoritarianism in his skin: a retired Army lieutenant colonel, he fled the country in 2015 to settle in the United States, after facing the Chavista regime and be arrested and tortured.

The expert described Venezuela as “a critical point in the destabilization of the region”, not only for offering human and material resources to the radical left in South America, but also through narratives.

“Venezuela offered a great platform to former President Rafael Correa, who was a great ally of the Chavista regime, and together they made Alba [Aliança Bolivariana para os Povos da Nossa América]. In this association, they offer all the platforms of a legitimate state and put pressure on the UN, the OAS [Organização dos Estados Americanos] and other international organizations so that they can see what is happening in the region from their perspective, or, through social networks, generate trends and narratives”, he detailed.

“Former President Lenin [Moreno, que governou o Equador entre
2017 e 2021] accused the presence of Venezuela in the protests he faced [em
2019]and it began to go underground and provide other types of support.”

Last week, the vice president of the ruling United Socialist Party of Venezuela (PSUV), Diosdado Cabello, criticized what he called the “silence” of the United Nations and the OAS on the Ecuadorian government’s response to the protests in the country.

“We want to express our concern about the scandalous silence of the OAS, of what remains of the Lima Group, of some governments that like to criticize, of the UN, with its Commission on Human Rights, of all over the world, which today remain silent about what is happening in Ecuador and the massacre they are doing against our indigenous brothers”, said chavismo number 2.

In an interview with Ecuadorian TV, retired colonel Mario Pazmiño, former director of intelligence for the country’s army and security and defense analyst, pointed to the involvement of four local groups in actions to destabilize the Lasso government: Committee for the Defense of the Revolution (which operates nationally, but especially in Quito), Coletivo Insurgente (which operates in border areas), Grupo Guevarista (with ties to Colombian guerrilla factions) and Grupo Mariateguista.

However, Pazmiño also pointed to the performance of foreign groups, such as the Venezuelan Tren de Aragua, the Colombian Comandos da Fronteira and even the Brazilian Comando Vermelho, which operates in the Amazon province of Sucumbíos.

José Gustavo Arocha is suspicious of the coming to power of left-wing South American presidents who say they are more moderate, such as the Chilean Gabriel Boric and the Colombian Gustavo Petro, whom he calls “puppets” adept at the same strategy of the past of “generating malaise” and delegitimize institutions” and then reap electoral victories.

“Basically, they have the same objectives: social control, weakening of institutions, end of the rule of law, increase in migration, siege of private property”, he accused.

Concerned about the impeachment threats of Guillermo Lasso and a critic of Lula, Arocha pointed out that the right and center-right need to learn to sell their proposals better.

“Their goal [esquerda] is to create a society dependent on the State, while we want the opposite. But how can we better sell this narrative? Because in the end, what the other narrative generates is more poverty, more chaos, disappointment, migrations, but we don’t know how to disseminate this more efficiently. We abandoned schools, universities, public spaces. We need to keep building the values ​​of private property, freedom, effort, work, instead of those who want to sell an idea of ​​an easy life”, he concluded.