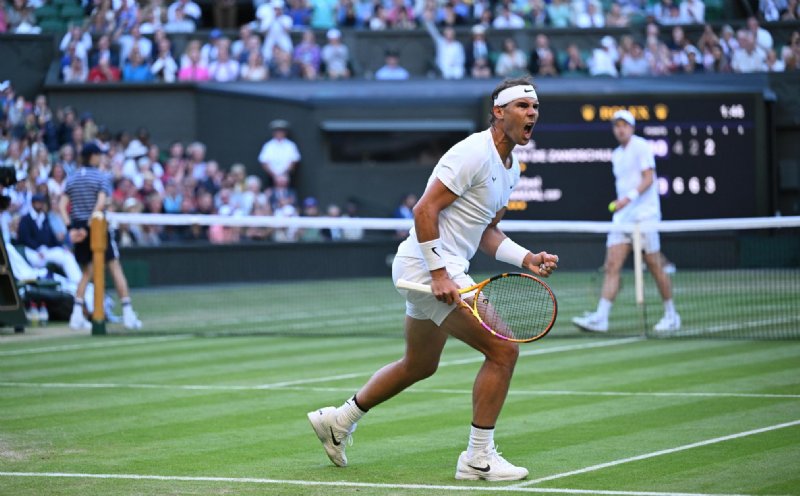 London, England) – In the game that ended the round of 16 of Wimbledon, Rafael Nadal confirmed the wide favoritism in the duel with Dutch Botic Van de Zandschulp and secured his place in the quarterfinals. The Spaniard scored the partials of 6/4, 6/2 and 7/6 (8-6) in 2h21 of departure.

Nadal’s 18th straight Grand Slam win this season, after the Australian Open and Roland Garros titles. The 36-year-old Spaniard and current world number 4 is a two-time Wimbledon champion, in 2008 and 2010, but has not reached the final in London since 2011. In his two most recent appearances at the tournament, in 2018 and 2019, he was a semi-finalist.

Nadal’s opponent in the quarterfinals will be the American Taylor Fritz, 14th in the ranking. They faced each other this year in the Indian Wells Masters 1000 final. At the time, Fritz won the match and imposed the first defeat to the Spaniard of the season. The history of clashes between the two players is tied 1-1, as Nadal had beaten his rival in the Acapulco final in 2020.

Beaten in the round of 16, Botic van de Zandschulp made his best appearance at Wimbledon. The 26-year-old, ranked 25th, had fallen in the second round last year. Also last season, he reached the quarterfinals of the US Open.

Rafa rolls into the quarter-finals 💪

The first set was balanced, with Nadal getting his only break in the last game of the partial. But while the Spaniard did not face break-points and only conceded six points in his service games, the Dutchman was threatened on four occasions, two of them in his first service game. Van de Zandschulp made it 6-5 on aces, and 10-8 on winners, but made 9 mistakes to Nadal’s only three.

Nadal had greater dominance of the actions in the second set, again without having the service broken, but this time facing a break-point. The Spaniard broke twice, already started with 3/0 and extended his advantage in the final stretch of the partial. The Dutchman again made more winners, 7 to 5, but he continued to miss a lot more. There were 14 unforced errors by Van de Zandschulp compared to five by the former leader of the ranking.

In the opening of the third set, Van de Zandschulp got a break of service, but Nadal soon looked for the equalizer. The Spaniard then fitted a sequence of three great serve games, losing just one point, and managed to get another break to lead by 5/2. When victory seemed close, he suffered his second break in the partial and allowed his rival to draw by 5/5.

The Dutchman continued to serve well and forced the tiebreak. During the tiebreaker, Nadal started better and even led by 6-3, but lost three match-points in a row, one of them in an excellent pass of the rival with the backhand in parallel. But after the side turn, the Spaniard won two more points and closed the game. Van de Zandschulp went 31-29 on winners, but made 34 unforced errors, double the 17 made by Nadal.