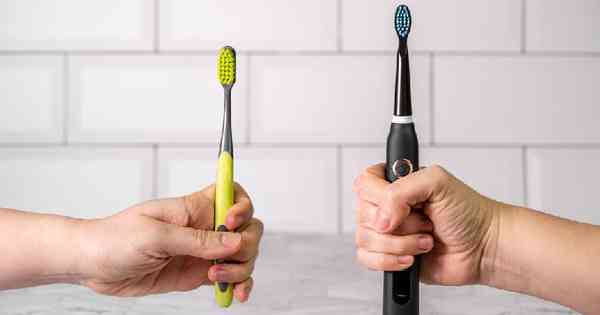 Is it time to replace your manual toothbrush with an electric one?

There is no shortage of alternatives on the market — some models even offer features such as applications and artificial intelligence — at widely varying prices.

But can an electric toothbrush save you trips to the dentist in the future?

And if that’s really true, would a more expensive electric toothbrush clean your teeth better than a cheaper, more basic model?

BBC Radio 4’s Sliced ​​Bread program clarifies some of these doubts below.

1. The electric toothbrush market is dominated by two brands — what use different technologies

The two big brands in the electric toothbrush market are Oral-B and Philips. Both use different technologies to clean teeth.

Oral-B electric toothbrushes have small circular heads that rotate back and forth about 70 times a second.

Philips toothbrushes use bristles on the head that move from side to side about 250 times per second.

2. These technologies may look different, but they generate the same results

The two brushing technologies offer a physically different experience. But what’s the difference?

“Not much,” suggests Damien Walmsley, a professor of restorative dentistry at the University of Birmingham’s School of Dentistry in the UK, who has researched toothbrushes since 1998.

“There may be more evidence that circular, by being a smaller head and doing this counter-oscillation, may be a little superior compared to (brushing) from side to side. But not by much.”

3. Prices Can Be Exorbitant — But Expensive Doesn’t Mean Better

But does paying a higher price mean better cleaning?

Earlier this year, UK consumer research website Which? evaluated electric toothbrushes on factors such as ease of use, comfort, battery life and how much plaque was removed.

The highest rated was a Philips toothbrush that costs £125. In second place was another Philips model, sold for around 290 pounds (R$ 1,86 thousand).

But in third place was a brush from the Superdrug pharmacy chain that costs £30.

The review says that, in terms of plate removal, this cost-effective option actually outperforms models that cost five times as much.

“While the sky is the limit when it comes to buying an electric toothbrush, there are also some wonderful bargains out there,” says Matt Knight, a member of the Which? research team.

“When you’re looking for a brush, keep an eye out for claims that a brush cleans your teeth better, because we often find that isn’t necessarily the case.”

The Which? It’s clear: if you’re looking for a toothbrush that cleans better, then “there’s no direct link between price and quality.”

4. But by paying more, you will get a battery that lasts longer

Paying a little extra for a toothbrush will give you a longer battery life.

“If you buy a more expensive toothbrush, (the battery) can last a few weeks before you have to charge it, than a cheaper one that you might have to charge every week, or in the case of cheaper ones, maybe every five weeks. days or so,” says Knight.

5. You need to assess whether artificial intelligence and apps are a help or a hindrance

Top-of-the-line brushes have a few features, including apps that assess your brushing technique. The iO model, for example, has 3D tracking that shows how effective you are.

“If you press too hard, it will light up red, but it will also tell you that you’re pressing too hard,” explains dentist Dan Shaffer.

But do we want to stare at our cell phone screen at night when we are trying to relax?

“All the extra features in the app are things that a person decides whether they’re important to him or not, and whether he’s prepared to pay more,” says Knight.

6. Manual toothbrushes can be just as effective at removing plaque

Greg Foot, presenter of the BBC’s Sliced ​​Bread program, stopped brushing his teeth for 24 hours and, under the supervision of dentist Dan Shaffer, used a lozenge that dyes existing plaque in the mouth purple.

Then he brushed his teeth with a manual toothbrush on one side and an electric toothbrush—the Oral-B iO—on the other. He observed a good improvement on both sides.

“Even hand brushing took most of the plaque off my teeth,” says Shaffer.

At this level of detail, there is nothing to suggest that electric brushing is better than manual brushing.

Foot asked Walmsley what the scientific literature says about manual versus electric brushing. “There is very little difference between the two,” he says.

“The evidence tends to show that there is a little more benefit to electric toothbrushes, but minimal and it depends on how you use it.”

If we focus on cleaning our teeth with a manual toothbrush, it can be just as effective at removing plaque as a top-of-the-line electric one.

But what if we brush our teeth when we’re tired %u200B%u200Bor distracted?

When considering between a manual and an electric toothbrush, the personal brushing technique should be a factor taken into account.

“In my opinion, professionally and personally, I think electric toothbrushes are probably one of the best things they’ve come up with to help us fight back teeth,” says Shaffer.

“Not only do they remove the plaque, they eliminate the human error factor.”

In other words, while hand brushing is a very good technique, electric toothbrushes do most of this work for you.

– This text was originally published in https://www.bbc.com/portuguese/geral-61948937