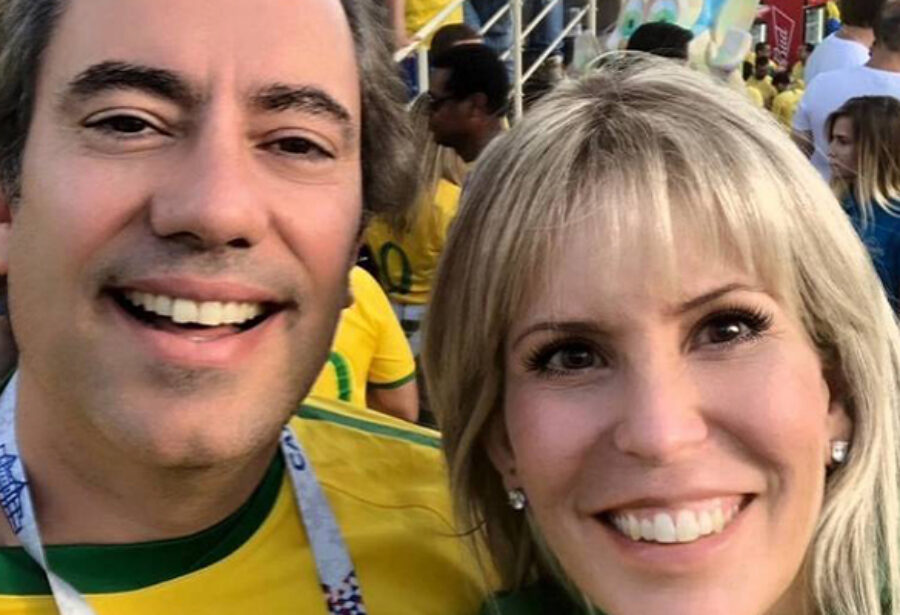 Wife of Pedro Guimarães, former president of Caixa, says they want to destroy his family

Wife of Pedro Guimarães, former president of Caixa, says they want to destroy his family

The wife of Pedro Guimarães, former president of Caixa Econômica Federal, broke the silence this Monday (4th), after the publication of allegations of sexual harassment made by bank employees, which caused the president’s fall last week.

Through her Instagram account and without directly commenting on the case, Manuella Pinheiro stated that the complaints were the result of attacks by people who want to destroy her family.

“We knew that in the fight for Brazil there would be disloyalty, envy, squalor and falsehood. We knew they would be accompanied by deliberate and merciless attacks with the sole purpose of destroying our family,” he wrote.

Manuella, who is also the daughter of former OAS director and Lava-Jato whistleblower, Léo Pinheiro, took advantage of the post to quote her father, saying that her “war for a better Brazil” began before 2019, when her husband took over. the presidency of Caixa.

“For many, my war for a better Brazil started in 2019, with Pedro president of Caixa Econômica Federal. However, it started in 2014, with my father, Leo Pinheiro. We fight armed with the truth and are protected by faith.”

She also said that in the face of so many messages of support, strength and prayers she would have received, she couldn’t help but share her point of view.

The first lady, Michelle Bolsonaro, left a comment in support on Manuella’s profile. She wrote only the word “Darling” in the post.

Last week, the website Metrópoles released a series of complaints from employees of the state bank against the now ex-president. Reports included intimate touches, inappropriate approaches, and inappropriate invitations.

The publication generated a wave of indignation and was added to videos and audios with episodes of moral harassment that would have been committed by Guimarães while he was in charge of the bank.

Unable to sustain himself in office, especially on the eve of the election that should define the future of President Jair Bolsonaro (PL), Guimarães ended up having to leave the post.

Feb.19 | Gustavo Bebianno
In charge of the General Secretariat of the Presidency, he was the first minister to be fired. He ended up at the center of a crisis, after Folha revealed a scheme of orange candidates by the PSL (the party for which Bolsonaro was elected). The former minister died in March 2020, after, according to his family, he suffered a heart attack.

Apr.19 | Ricardo Velez Rodriguez
The fall of the former Minister of Education took place during a power struggle between the military and followers of the writer Olavo de Carvalho. In his place, the also controversial Abraham Weintraub took over.

Jun.19 | Carlos Alberto dos Santos Cruz
The general commanded the Secretary of Government of the Presidency of the Republic and collected disagreements with the president’s sons and Olavo de Carvalho – the dispute was over government communication

Jun.19 | Juarez Aparecido de Paula Cunha
In a meeting with journalists, Bolsonaro said he would dismiss him from the post office, because Cunha had said in a previous event that the company would not be privatized. The general announced his departure from the state-owned company five days later.

Jun.19 | Joaquim Levy
Bolsonaro told journalists that Levy, then president of the BNDES, had ‘had his head at a premium for some time’. The reason would be the signal that the economist would appoint an executive who worked in the PT administration

Apr.20 | Luiz Henrique Mandetta
The minister was fired by Bolsonaro at the beginning of the Covid-19 pandemic, after a series of disagreements between them over how the ministry should act in dealing with the health crisis.

Apr.20 | Sergio Moro
His presence was seen as one of the government’s showcases. On his departure, Moro said that Bolsonaro wanted access to reports and confidential information on PF operations and insisted on changing the police command.

May.20 | Nelson Teich
He replaced Mandetta at the Ministry of Health shortly before completing a month in office, and the disagreement with the Planalto on the protocol for the use of chloroquine in the fight against the new coronavirus was decisive in his departure.

Jun.20 | Abraham Weintraub
At MEC, he accumulated polemical statements and poor results in the management of educational policy. In a meeting at Planalto, in April 2020, he even said that he would put ‘all these bums in jail, starting with the STF’

Jul.20 and Aug.20 | Stampede at the Ministry of Economy
Special secretaries Salim Mattar (Destatization) and Paulo Uebel (Debureaucratization) decided to leave the government. In July, Mansueto Almeida had already left the command of the National Treasury

Dec.20 | Marcelo Alvaro Antonio
The Minister of Tourism was the center of the PSL’s scandal in Minas Gerais and was indicted by the PF on suspicion of electoral falsehood, misappropriation of electoral resources and criminal association.

Apr.21* | Roberto Castello Branco
Interfering with Petrobras, Bolsonaro appointed General Joaquim Silva e Luna as the new president of the state-owned company, replacing Castello Branco, the target of criticism by the president after saying that the dissatisfaction of truck drivers with increased costs was not the company’s problem.

Jun.21 | Ricardo Salles
Called by environmentalists the ‘anti-minister of the Environment’, Salles weakened protection agencies, reduced the impact of fires and fought the inspection of infractions.

Apr.22* | Joaquim Silva and Luna
The military’s dismissal took place after a series of frictions with President Jair Bolsonaro (PL) due to a mega-increase in fuel prices promoted by the company

Jun.22* | Jose Mauro Ferreira Coelho
To replace Silva and Luna, Bolsonaro nominated Coelho, who defended the maintenance of the fuel price policy. The government announced that it would change the president of Petrobras again in May, after a new fuel readjustment