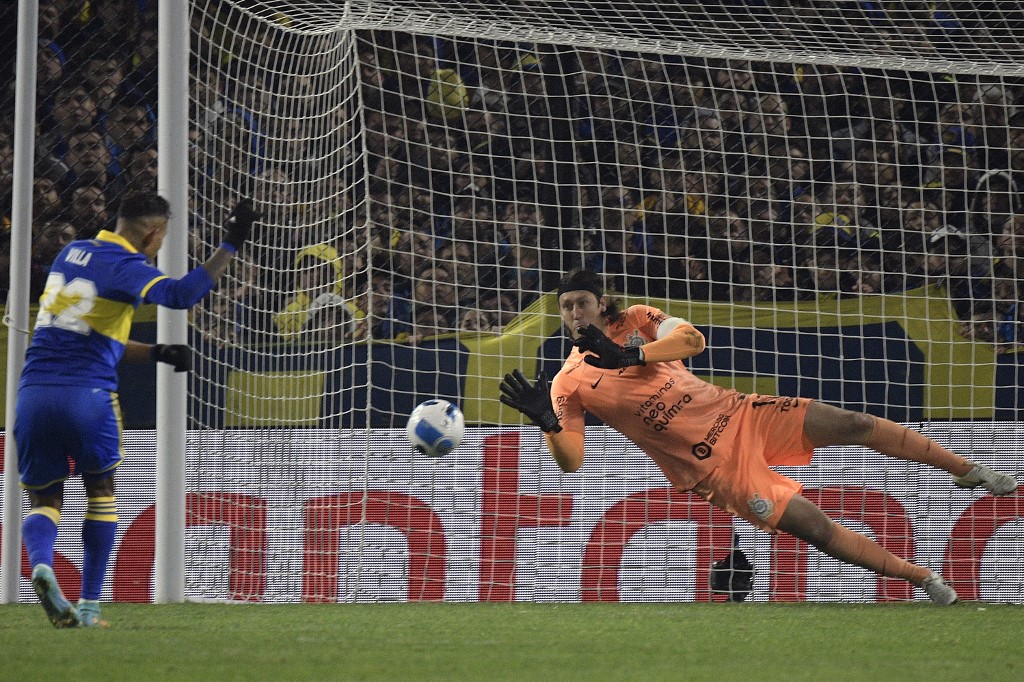 O Corinthians need to thank Saint George! Timão went to Bombonera on Tuesday night and won their classification for the quarterfinals of the Libertadores by beating Boca Juniors on penalties, with two defenses by Cássio, after 0-0 in normal time and a lot of Argentine pressure during the 90 minutes.

Now, the alvinegros are waiting for the winner of Flamengo and Tolima, which takes place this Wednesday, at 9:30 pm (Brasília time), at Maracanã. Rubro-Negro won 1-0 in Colombia. On Wednesdays, the disputes will take place from August 2nd to 4th (outward) and August 9th to 11th (return).

The first half was totally dominated by Boca Juniors, with three clear scoring chances, all with Benedetto. In the first, he received a cross from Zeballos and kicked over the goal and, still, in a penalty committed by Raul Gustavo who stopped on the crossbar. Fabra and Villa also had their opportunities. On the other hand, Corinthians did nothing to scare, with no shots on Rossi’s goal.

In the second stage, the rhythm followed the same, with Argentine dominance and without any danger from the Corinthians. With the score at zero, the decision went to penalties.

In the collections, Rojo and Izquierdoz did, as well as Fábio Santos and Cantillo. While Cássio defended Villa’s charge, Rossi took Raul Gustavo’s. In the sequence, Pol Fernández did, but Bruno Melo stopped the Argentine goalkeeper. Benedetto had the chance of the game in the feet, but sent it out.

Róger Guedes made and tied the duel again, starting for the alternating beats. Óscar Romero, Roni, Varela and Piton did, but Cássio took the charge from Ramírez. Gil did and put Timão in the quarterfinals.

It is worth mentioning that João Victor, hit in the right ankle and substituted in the first stage, played his probable last game with the Timão shirt, since it is agreed with Benfica. Gustavo Mantuan, who will join Zenit in the coming weeks, in exchange for Yuri Alberto, was also injured.

Corinthians’ next match will be this Sunday, at 4 pm (GMT), against Flamengo, for the 16th round of the Brasileirão, at Neo Química Arena. Boca visit San Lorenzo the day before, at 3:30 pm (GMT), for Argentino.

The game – As was to be expected, the xeneizes started with greater possession of the ball and trying to risk more offensively, so much so that the first attack took place at five minutes, in a shot by Villa defended by Cássio.

Five minutes later, Fabra arrived from the same side, on the right of the attack, and kicked from long distance, over the goal. At 12, after a corner kick, the Brazilian archer took Advíncula’s kick without any surprises.

In the 17th minute, Benedetto made a foul on Cantillo, but, in Piton’s lift to the area, the defender took away the danger. On the counterattack, Zeballos charged down the right and made a cross into the area, finding Benedetto, who took it under the ball and sent it over the goal, in the clearest chance of the Argentines so far.

Great pressure from Boca in the Corinthians area, with a closed free kick, for Cássio’s strange defense. Next, Raul Gustavo went up to take the ball and hit Pol Fernández with his elbow. The referee was called by VAR and, after review, the penalty was awarded. In the charge, however, Benedetto sent the post.

Shortly after, in a corner, Cássio came out badly again and Benedetto sent him out. Then, Mantuan tried to pass to Róger Guedes, but shirt 9 ran into the defense. In a corner later, Cantillo charged inside the area, but Fábio Santos sent it out.

In a ball dispute on the right side, João Victor ended up getting hit in the right ankle and had to be replaced by Gil. Perhaps it was the 23-year-old’s last match, already agreed with Benfica, from Portugal. In the rest of the first half, Boca exchanged passes to try to infiltrate the alvinegra defense, and Zeballos managed a shot from the left side of Cássio’s goal.

At the return of the break, without substitutions in both teams, Corinthians tried to go forward for the first time in the entire match with Mantuan, on the right, but the player ended up stopped by Varela and had to be replaced by Giovane. After that, Timão again withdrew, with pressure xeneize in investments by Fabra and Villa.

At 13 minutes, Benedetto received from the right, took it from Cássio and kicked from cover, but the ball went over the goal. In his first appearance, practically, in the Boca area, Lucas Piton was hit in the face by Advíncula, but the referee ordered him to continue. Totally on the defensive, Corinthians took more pressure and, at 24, Advíncula tried to pass to Benedetto, who won a corner.

Vítor Pereira promoted the entries of Roni, Bruno Méndez and Bruno Melo in the places of Du Queiroz, Rafael Ramos and Giuliano. Unlike the first half, Boca couldn’t create as many chances and left the game warmer. In the 40th minute, the referee called a foul by Giovane on top of Villa, but, in the charge, the defender pushed away.

The game continued in the defensive field of Corinthians and, after five minutes of extra time without major surprises, only with a dangerous shot by Oscar Romero, the decision went to penalties. In the collections, Rojo and Izquierdoz did, as well as Fábio Santos and Cantillo. While Cássio defended Villa’s charge, Rossi took Raul Gustavo’s.

In the sequence, Pol Fernández did, but Bruno Melo stopped the Argentine goalkeeper. Benedetto had the chance of the game in the feet, but sent it out. Róger Guedes made and tied the duel again, starting for the alternating beats. Óscar Romero, Roni, Varela and Piton did, but Cássio took the charge from Ramírez. Gil did and put Timão in the quarterfinals.

Previous Selton Mello is invited to be part of the Oscar voting team
Next Polium One: the first console for NFT games is coming (is it?)