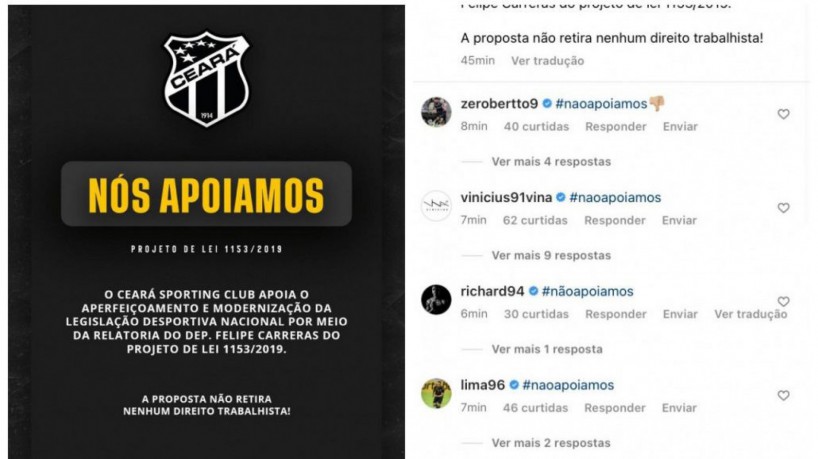 Ceará published, this Wednesday, 6, through its social networks, a note expressing support for Bill 1153/19, which suggests changes to the Pelé Law. The law determines the rules and guidelines for the conduct of sport in Brazil.

Bill 1153/19 entered the process through deputy Felipe Carreras (PSB-PE), after the tragedy that killed 10 young Flamengo athletes in a fire in the club’s accommodation. The measure requires sports entities to prepare annual technical reports, which must be presented to the Public Prosecutor’s Office, certifying inspections of the safety conditions of accommodation for athletes in training. The text also inserts provisions in the Pelé Law.

On June 28, Congresswoman Celina Leão (PP-DF) filed an urgent request on the agenda, which was approved, allowing the project to be voted on by the Plenary without having to go through the committees first.

According to Ceará, the project will bring “improvement and modernization of national sports legislation” and that the change will not remove any labor rights. In addition to Vovô, other Brazilian football clubs, such as São Paulo, Fluminense, América-MG, Avaí and Londrina, expressed their support for the project.

However, some Alvinegro players, such as Luiz Otávio, Vina, Zé Roberto, Richard Coelho, Jael, Iury Castilho and Lima, commented on the publication with the hashtag “#naoapoiamos”.

Some players also used their networks to express themselves on the subject, as is the case of Vina, from Ceará, and Thiago Galhardo, from Fortaleza. Both published the same art, which says that athletes need to be heard, and that the change will remove labor rights.

Ceará deleted the post from social media about two hours after publication.

The Football Athletes’ Union of the State of Ceará (Safece), released a note proving against the project and that the matter should be widely debated with effective participation of the athletes. Check out the full note.

“Safece, Union of football athletes in the state of Ceará, does not agree with Bill 1153/19, which revises the Pelé law, without listening to our category. This PL proposes to change acquired achievements and we understand that it should not be voted on on an urgent basis, as it involves contractual clauses. We defend that any change that may occur, should be widely debated with the effective participation of athletes. Safece unconditionally supports the manifestations of athletes from Ceará clubs on social networks”.