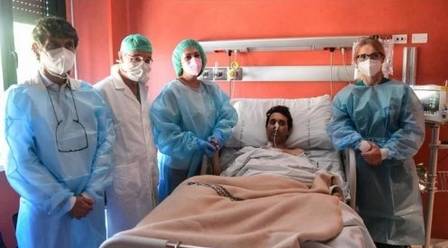 Terminal patient advances marriage, but gets unexpected transplant the next day and recovers

An Italian, who had suffered a heart attack in June and was about to die, decided to advance your wedding in the hospital in Turin (Italy) where he was hospitalized in a very serious situation, after the doctors gave him little chance of life and was almost impossible for him to get to the wedding datescheduled for September.

The 47-year-old patient was admitted to the ICU of Molinette hospital. Clinical conditions worsened, and the installation of a mechanical circulatory assistance system was necessary.

Problems with clotting therapy forced the patient to be placed on the waiting list for a emergency transplant through the Piedmont Regional Transplant Center. Even though it was an emergency, the prognosis was not favorable, because nothing guarantees the speed of the process and the compatibility of the.

“We decided to get married in the ICU as the wedding was scheduled for September and we didn’t know if we would make it until that day. Thanks to the doctors, we made it”said his wife, 42, according to “La Stampa”.

All in a hurry, no flowers, wedding dress and bouquet. It was supposed to be a “farewell”in front of a judge.

“A miracle happened the night after the wedding: we received a beautiful donation, a new heart for my husband. Now we just have to wait for him to come home because we have a little girl, who is almost 3 months old”continued the Italian.

The miracle was in the hands of the doctors, who flew to Naples and returned with a donated and compatible heart. The transplant took seven hours, the day after the wedding.. The surgery was successful, and the patient is recovering well.

“It’s beautiful double news with a happy ending for the man and the couple. Congratulations to our teams and the transplant system”commented Giovanni La Valle, director general of the City of Health in Turin.

Previous Mineirão: ‘what hurt me was to see my son crying’, says robbed fan
Next 90s comedy could get a sequel