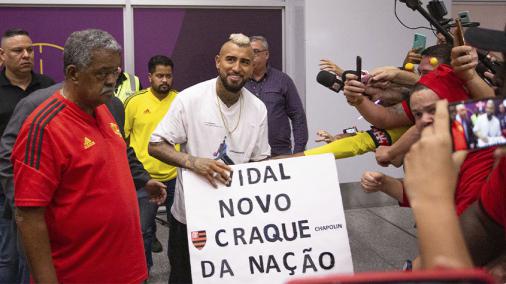 “King Arthur” is in town. On Wednesday night, at 6:15 pm, the Chilean Vidal landed in Rio de Janeiro and had his first contact with the fans of Flamengo. about 100 red and black gathered in the lobby of Galeão Airport waiting for the midfielder. Now, the player will watch the game against Tolima, for the Copa Libertadores. He discussed the signing of the contract with Fla.

– I’m happy to be here. It’s a happy time. We are still negotiating. I will watch the match as a Flamengo fan – assured the Chilean, in the few words before getting into the car.

The tendency is for Vidal to undergo medical examinations to finally sign with Flamengo. However, he still needs to complete the cancellation with Internazionale de Milan.

Vidal arrives at Flamengo free of charge after two seasons at Inter Milan. The 35-year-old midfielder’s contract with Rubro-Negro will run until December 2023.

Shirt 22 arrives to reinforce the midfield after the departure of Andreas Pereira. In addition to Vidal, Flamengo has already confirmed the hiring of Everton Cebolinha, a forward who came from Benfica.

The reinforcements hired for the second half, however, will only be able to act from the 18th of July, the opening date of the transfer window in Brazil. On vacation in Chile after the European season, Vidal maintained his training routine with a personal trainer. Flamengo’s first game after the registration period is against Juventude, on July 20, for the 18th round of the Brasileirão.

Inter receive Santos in Beira-Rio this Saturday afternoon. The match, valid for the 29th round …