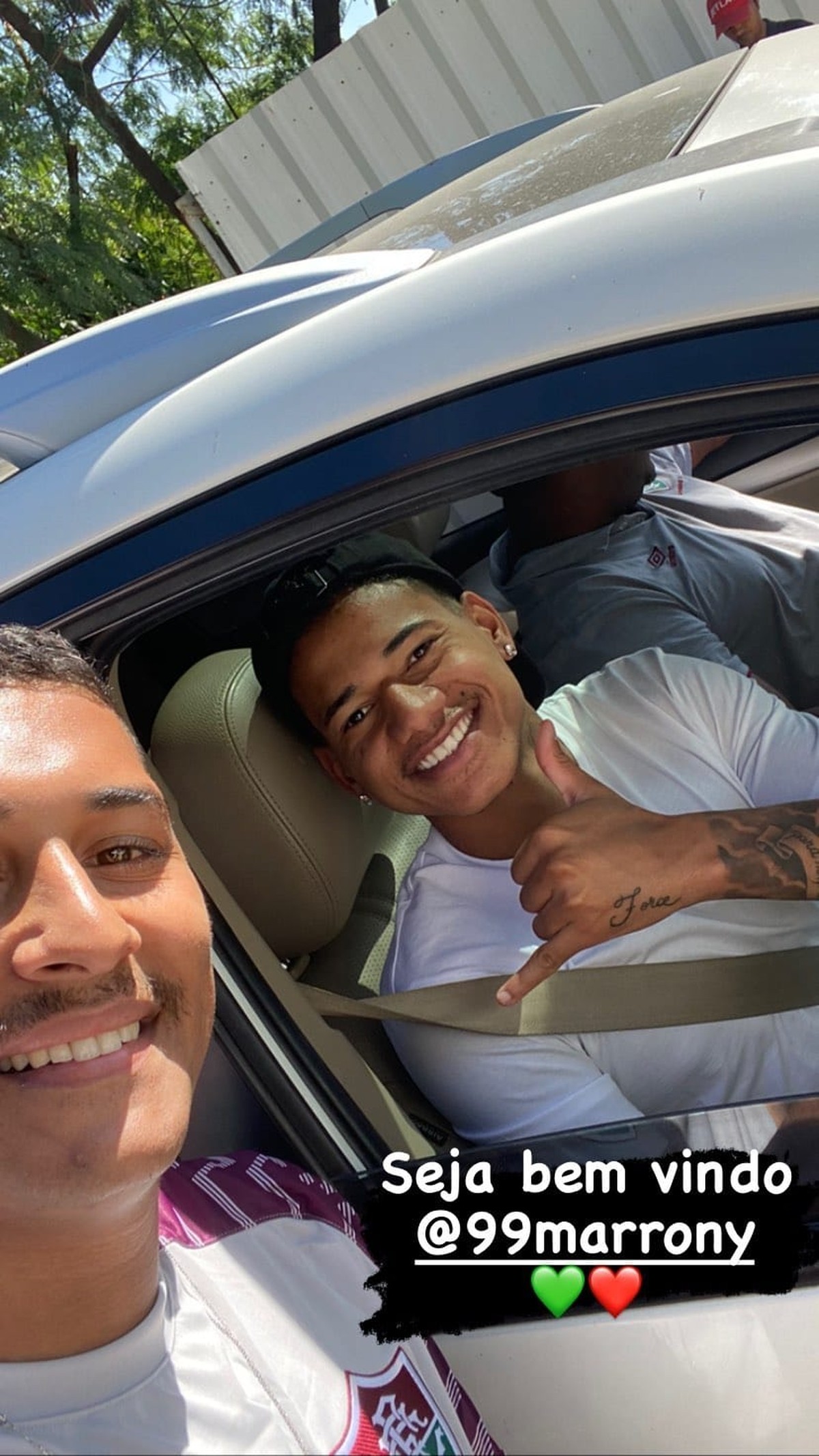 Marrony takes exams, goes to Fluminense’s CT and will sign this Thursday | fluminense

After disembarking in Rio de Janeiro on Tuesday night, Marrony had a full day of medical exams this Wednesday and was seen at the door of CT Carlos Castilho, where he took a picture with fans who were there. On loan from Denmark’s Midtjylland, the 23-year-old striker is still awaiting the results of some tests, and he is expected to sign a contract this Thursday.

Marrony took a photo with a fan at the door of the CT of Fluminense – Photo: Reproduction

The information that Marrony was in CT was released by the channel “Sentimento Tricolor” on YouTube and confirmed by ge. But what was the striker doing there, if he hasn’t signed a contract yet? It’s just that the physiological tests are done there. But he also took advantage of the visit to record publicity material for the official announcement, which should also take place this Thursday, when President Mário Bittencourt will have returned from Brasília, where he had a meeting on changes to the Pelé Law.

To sign the player, ex-Vasco and Atlético-MG, Fluminense won the competition in the market – Bragantino was also interested in the striker, and Internacional had already tried to sign him in recent months. But the protracted negotiation with Midtjylland was not easy. After comings and goings of proposals and counter-proposals, Flu agreed to pay for the loan and offered €300,000 euros (R$1.6 million) in installments. But the official “ok” from the Danes to close the deal took a while and only came after the tricolor offer rose another €100,000 (R$550,000).

But what led Fluminense to invest in a player who did not establish himself in Denmark? The answer has a first and last name: Fernando Diniz. Despite never having worked with Marrony, the coach has faced him a few times and is an admirer of the striker, mainly because of the versatility of being able to play as a winger or centre-forward.

The report also found that Diniz tried to hire Marrony when he was at São Paulo, between 2019 and 2020, and at Santos, in 2021. During the negotiation, the coach even called the striker to show his confidence and convince him to choose the Fluminense. That part worked.

Internally, there is only a fear that the reinforcement will gain the status of “Luiz Henrique’s replacement”, since Marrony does not have the same characteristics of the jewel sold to Betis, from Spain. His biggest highlights, for example, were playing on the left wing, opposite the side played by the kid from Xerém.

Marrony can be a kind of second striker alongside Cano in the tricolor attack, re-editing a duo that appeared at Vasco in 2020. Something that also cheers Wellington Liberato, the player’s father and who was at the airport to receive his son alongside his wife, Simone:

– The expectation is very good. Professor Fernando Diniz is a great coach, he has been doing an excellent job at Fluminense. And for Marrony it will be very good, he will play with Cano again, he has already assisted him at Vasco… I believe Marrony will grow a lot at Fluminense

Cano celebrates with Marrony a goal for Vasco in 2020 — Photo: Rafael Ribeiro/Vasco

Marrony and Cano have played only 11 matches together so far, as in June 2020 Vasco sold the striker to Atlético-MG. In these 11 matches of the duo, there were four wins, five draws and two defeats. And Cano scored five goals in those clashes.

Previous Prime Day 2022: This year’s 6 most wanted products
Next According to estimates, Galaxy S22 Ultra will have higher sales than models in the Note line