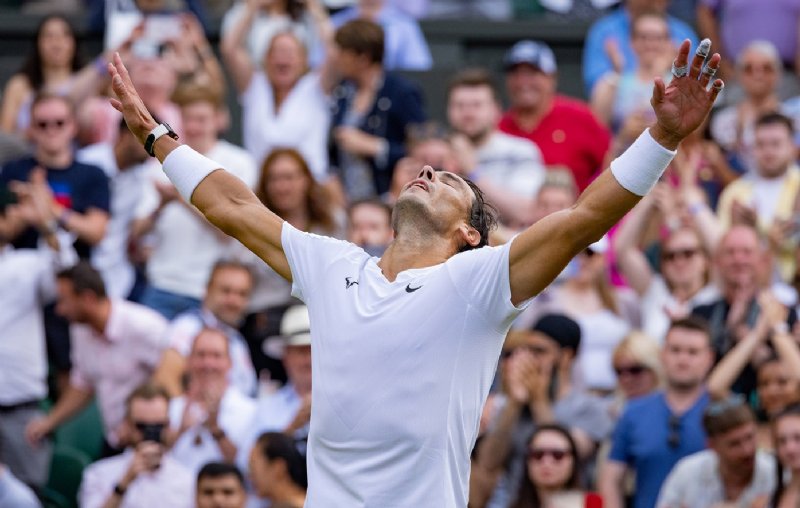 Nadal: ‘I thought I couldn’t finish the game’

London, England) – After getting a difficult comeback win in the quarterfinals in the Wimbledon final, Rafael Nadal admits that he didn’t know if he would be able to finish the game against the American Taylor Fritz. A muscle injury in the abdominal region limited his movement, especially on the serve, and he needed to make adjustments to his game. The Spaniard also says that he will need further tests before defining the next steps.

“It was an exciting game and an important win, I’m really happy about that,” Nadal said after winning 3/6, 7/5, 3/6, 7/5 and 7/6 (7-4) over Fritz. “This abdominal injury is not going well, to be honest. I had to find a way to serve a little differently, for many moments I thought I might not be able to finish the game, but I don’t know. But the energy on the court helped me.”

“I’m going to do some more tests tomorrow, but it’s hard to know. I’m used to putting up with the pain and playing with physical problems. I had these feelings for a few days, but today was the worst day. The pain and limitation increased a lot, but I managed to win. the match. Let’s see what happens tomorrow,” added the 36-year-old veteran, who will face Australian Nick Kyrgios in the semifinals.

The tennis player’s family was watching the game on Center Court and Nadal acknowledges that his father, Sebastian, and sister, Maria Isabel, recommended that he leave the court. “They told me to quit the game, yes. I’ve withdrawn a few times in my career, but it’s something I hate to do. So I kept trying. I wanted to finish. The doctor came, gave me some anti-inflammatory painkillers, and the physiotherapist just tried to relax the musculature a little there. But it’s difficult. Nothing can be fixed when you have an injury like that. In the end it didn’t matter whether with a victory or a defeat, but of course I prefer to win. I fought”.

“It was a difficult match against a great player. All credit to Taylor, who has been playing very well all season. From my personal side, it was not an easy match, so I am very happy to be in the semifinals”, comments the Spaniard. , who had lost to Fritz in the Indian Wells Masters 1000 final in March.

Due to all the physical limitations, Nadal avoids making a prediction for the semifinal with Kyrgios. His record against the Australian is six wins and three defeats. But on grass, each won once. “I hope I’m ready to play. Nick is a great player on all surfaces, but especially here on grass. He’s having a great season and it’s going to be a great challenge. I need to be 100% to keep having chances and that’s what I’m going to try to do. “.