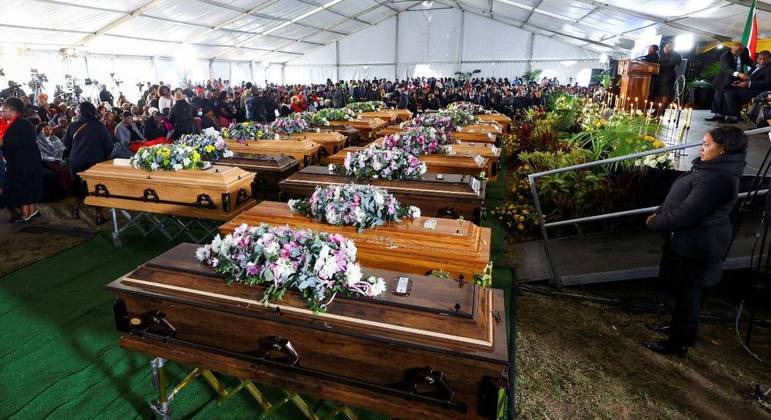 South Africa paid tribute to the 21 young people who died under unclear circumstances at a bar on Wednesday in the popular neighborhood of Scenery Park, near the eastern city of East London.

More than a thousand people, including South African President Cyril Ramaphosa, attended the tribute, amid the tragedy that shocked the country. The youngest victim was a 13-year-old girl.

In the early morning of June 26, the bodies of the victims were found inside a speakeasy, with no sign of violence.

Dressed in black, those present sang and danced to gospel songs in front of 19 empty coffins as police are still investigating the deaths. The two remaining victims were buried separately by their families.

The mourners were placed, along with the authorities, in a large tent and hundreds of people followed the ceremony by broadcast, according to AFP journalists at the scene.

Amidst the tears and prayers, the police band played the national anthem. “We still don’t know what killed our young people,” President Ramaphosa declared. “Families need answers, they want to know what happened to their children,” he added.

The most likely cause appears to be some sort of chemical or gas leak in the place, which was crowded and poorly ventilated. Another theory authorities are investigating is that the young people were poisoned by something they consumed. Some of the hospitalized survivors complained of chest pains.