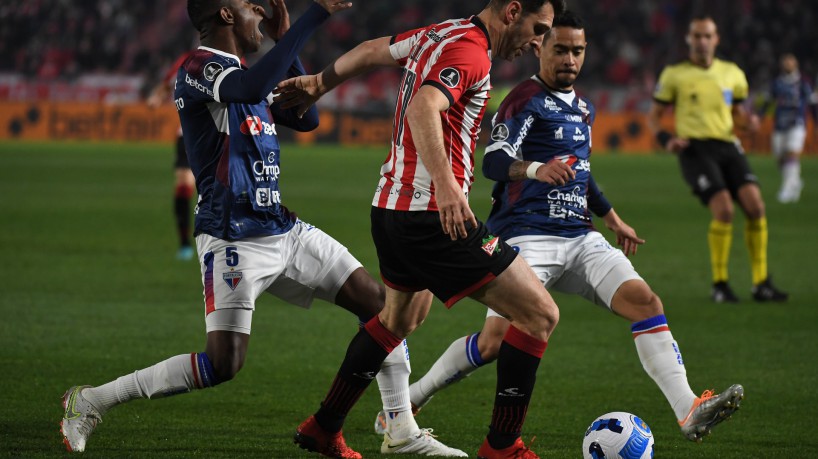 Fortaleza said goodbye to the Copa Conmebol Libertadores this Thursday, 7th, after being defeated 3-0 by Estudiantes, at the Jorge Luis Hirschi stadium, in La Plata, Argentina. The goals of the match were scored by Manuel Castro, twice, and Zapiola.

With one player less since the 20th minute of the first half, when Yago Pikachu was sent off, Tricolor made several defensive mistakes and ended up being overcome by the Argentines.

Leão now returns to attention for the Brasileirão, the club faces Palmeiras next Sunday, 10, at Arena Castelão, at 18:00, seeking a recovery campaign in the event to leave the lantern.

Without Tinga and Landázuri, Vojvoda was for Ceballos in the line of three defenders, along with Titi and Benevenuto. Zé Welison and Hércules formed the midfielder duo and Moisés and Romero returned to start together.

The game started with Fortaleza trying to increase the score trying to recover the ball closer to the goal, and despite causing discomfort in the exit of Estudiantes, the strategy did not have much effect.

When he came out of the pressure, the Argentine club found spaces to progress, mainly exploring the left side of Fortaleza and the defensive problems in the aerial ball. In the 7th minute, Leandro Díaz crossed and Rogel went up free, and the ball passed Boeck’s left side. In the next minute, it was Rogel’s turn to cross for Manuel Castro to head, also alone, and cover the Tricolor archer to open the scoring.

As if the superiority of the home team was not enough, Fortaleza also lost the main player of the season. Yago Pikachu was fouled hard, VAR recommended the referee to review the bid, and he gave the Tricolor winger a red card in the 21st minute of the first half.

Two minutes later, Estudiantes scored the second with Rogel, but after reviewing the video referee, the referee signaled Noguera, who had deflected the ball earlier, offside.

With a man down, Fortaleza couldn’t go out for the game during the first half, and saw the Argentine club dominating the midfield and trying to decide on the aerial ball, but the match went to halftime with 1-0 on the scoreboard. .

In the second half, Vojvoda kept the same team as in the first half, and after 2 minutes, the bucket of cold water came. Once again in a lift to the area, Más found Castro free, and he headed in the corner to make the second.

Leão’s coach called Ronald and Matheus Vargas to replace Hércules and Lucas Lima, but the changes did not change the game’s outlook. At 11, Marcelo Boeck tried to play with his feet, but missed the pass, delivering it to Zapiola’s feet, who passed him and scored the third for the Argentines.

With the setback 3-0 on the scoreboard, Vojvoda took out strikers Moisés and Romero and put in Romarinho and Igor Torres, but by then Fortaleza was already delivered on the field, while Estudiantes only managed the result to confirm the classification.