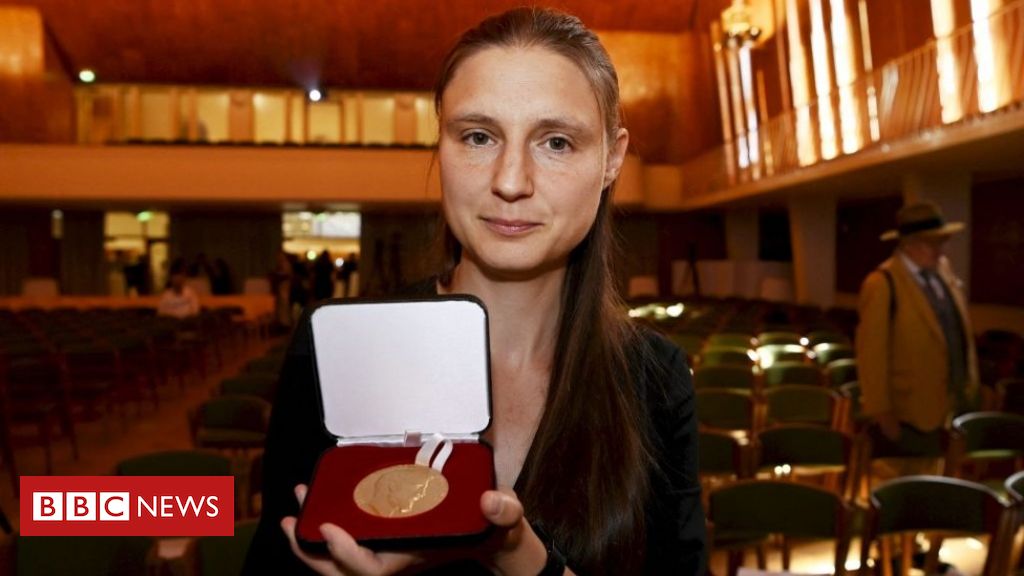 Maryna Viazovska is the second woman in history to win the Fields Medal, considered the Nobel Prize in mathematics. Until then, only one woman, the Iranian Maryam Mirzakhani, had received this medal, which began to be awarded in 1936 for the greatest mathematical achievements in the world.

“Viazovska is brilliant math,” Christian Blohmann told BBC News Mundo, the BBC’s Spanish-language service. “I admire her because her solution to the bead packing problem is very beautiful and extremely unexpected.”

The researcher at the Max Planck Institute for Mathematics in Germany refers to the fact that in 2016 Viazovska solved two cases of the famous geometric problem that the great German scientist Johannes Kepler proposed in the 17th century.

For this feat, she received several awards, but her contribution did not stop there.

“As a result of the Viazovska resolution, in the last five years, lines of research have been opened in different parts of the world,” said Pablo Hidalgo, a researcher at the Institute of Mathematical Sciences of the Higher Council for Scientific Research in Spain.

Ukrainian mathematicians received the medal at the International Congress of Mathematicians, at a ceremony in Finland. The other three winners of the prize, which is given every four years to mathematicians under the age of 40, were: the Frenchman Hugo Duminil-Copin, the American June Huh and the British James Maynard.

Albert Einstein (1879-1955) said, “If Euclid failed to ignite your youthful enthusiasm, you were not born to be a scientific thinker.”

The Greek mathematician is precisely one of Viazovska’s heroes, who says he admires the extraordinary figures who were able to “change mathematics or the way of thinking about it”.

Viazovska was born in Kiev, the capital of Ukraine, and has been fascinated by mathematics since childhood. When it came time to decide which course to take at the university, she had no doubts.

The Ukrainian says she likes the fact that in mathematics it is possible to determine where “the truth” is, to distinguish what is wrong from what is right. After graduating from Taras Shevchenko National University, she went to Germany for postgraduate studies.

During his postdoctoral studies in Berlin, one of the problems he included in his research proposal was the spheres that Kepler formulated in 1611.

Viazovska focused on this for about two years, until the “magical” moment came to find the solution. “It turned out to be easier than I thought.” The problem she solved can be simplified into this question: how many balls can you put in a very large box? But the math used to arrive at the answer is immensely complex.

For Hidalgo, this problem “has a certain importance for the real world in the sense that people without mathematical studies can understand what it is about” and may even have had to face this question at some point.

What is the ideal way to occupy a space with a certain number of spheres, for example oranges?

“Certainly, the greengrocers had already realized that the best way to organize the oranges was in the shape of a pyramid”, says the Spanish researcher.

“But there’s a substantial difference between: ‘this shape looks like it occupies the space well’ and being sure that ‘this shape really is unbeatable in occupying the space in the best way'”.

Kepler couldn’t prove it and he wasn’t the only one, extraordinary mathematicians didn’t succeed either. It was in the late 1990s that the American mathematician Thomas Hales made the proof for three dimensions.

But the fascinating thing about this conjecture is that it can be transported to circles (two dimensions) or to spheres of any dimension. “What Viazovska achieved in 2016 was to generalize the problem.”

She found the ideal way to package eight-dimensional spheres.

“It’s not that mathematicians have complicated themselves by inventing a weird way to pack spheres, it’s the same problem, but in a dimension that, as humans, we can’t visualize,” says Hidalgo.

And while this packing of higher-dimensional spheres is difficult to visualize, “they are eminently practical objects,” wrote mathematician Erica Klarreich in a 2016 Quanta article..

“They are closely related to the error-correcting codes that cell phones, space probes and the internet use to send signals through noisy channels.”

According to Hidalgo, the mathematical solution Hales found “was very long and very complicated”. His result was presented in about 250 pages and required many computations with computers.

“It took almost 20 years to verify that these calculations with computers were correct. Viazovska, on the other hand, wrote a 25-page article for the eight-dimensional problem”, emphasizes Hidalgo.

“If we take the introduction, the bibliography and other aspects of the form, it has 10 or 15 pages of math, nothing more, and with that it demonstrates a problem in a higher dimension, so we could say that it is more difficult than what Hales demonstrated.”

He points out that the Ukrainian’s work was “so meticulous, so exact, that it is an easier demonstration to understand than the previous one, which took up dozens of pages.” “That’s not to say your math pages are simple, they’re complex,” he notes. But for experts, it’s 10 pages of pure math.

From Switzerland, Özlem Imamoglu, professor in the Department of Mathematics at the Federal Polytechnic Institute of Zurich (ETH Zürich), notes that the solution Viazovska arrived at “by building so-called magic functions was a spectacular achievement”:

“The existence of such functions was conjectured by (Henry) Cohn and (Noam) Elkies in 2003, but has remained elusive despite the efforts of many brilliant mathematicians,” he told BBC News World.

“The simplicity and elegance of his demonstration is incredible and admirable.”

To top it off, after solving the problem of packing the eight-dimensional spheres, just a week later – this time with other colleagues – she solved the problem in dimension 24.

Viazovska’s first demonstration is considered a masterpiece, which allowed his colleagues to “understand the problem well and generalize it to solve a similar but even more difficult equation,” Hidalgo said.

He clarifies that the problem of ideal packing in many dimensions remains open, as they only found configurations for dimensions 8 and 24.

Experts point out that the beauty of the solution that Viazovska has arrived at is that it connects with different areas of Mathematics. The result of packing the spheres has a lot to do with signal analysis or Fourier analysis, a 19th century French mathematician and physicist.

“The entire power of Viazovska’s result arises from the combination, in a hitherto unprecedented way, of two areas of Mathematics: number theory and Fourier analysis”, explains Hidalgo.

And therein, in his opinion, lies the strength of current mathematics. There are areas that have evolved separately, and “what’s been difficult and really interesting in recent decades is building bridges between them.”

“It can be extremely helpful if one is able to establish a robust bridge between two different areas of mathematics, and that is exactly what Viazovska did.”

“It takes a lot of knowledge and understanding of which are the important properties of each area to really be able to put them together. From this union, the result of Viazovska’s calculation came.”

“Thanks to the fact of having established contact between the two areas, it is already known where the relationships between them are going. This opened up a new mathematics that is still being explored and producing results, and this will certainly continue to happen in the future”.

Indeed, Imamoglu notes that while Viazovska is “most famous” for her solution to the packing of spheres problem, “her work on Fourier interpolation formulas and energy minimization issues” which she has done alongside other mathematicians distinct, “deserve the same recognition”.

When she received the New Horizons award, Viazovska thanked her professors, colleagues, and co-authors, “since without them none of my investigations would be possible.”

“Science is a collaborative effort, and rapid progress is possible when people openly share their knowledge and ideas,” she said.

Currently, the Ukrainian is a professor at the prestigious Federal Polytechnic School of Lausanne (EPFL), Switzerland. Blohmann met her when she was a doctoral student in Germany.

“Maryna is an extremely kind and modest person. The recognitions and positions she has won haven’t changed her at all,” she says.

On March 16, the Mathematics department at ETH Zürich, where Einstein studied, offered the first of the Alice Roth Lectures, created in honor of the great Swiss mathematician.

The purpose of these sessions is to honor women who have achieved outstanding achievements in mathematics.

Viazovska was the guest and her presentation was entitled: “Fourier interpolation pairs and their applications”. Before delving into the math of her presentation, she recalled a colleague and fellow countryman.

‘We will rebuild peace’

“It’s been three weeks since my life changed forever in a very dramatic way that I could never have imagined. Preparing for this performance was very difficult,” he said.

“Today, I would like to celebrate the life and achievements of Alice Roth, but there is also another math I would like to remember. I want to dedicate my lecture to Yulia Zdanovska, a 21-year-old mathematician and computer scientist whose life tragically ended on March 8 in the city of Járkif.”

Zdanovska stayed to defend the city from the Russian invasion, but “unfortunately died in a missile attack.” “Ukrainians are paying the highest possible price for our beliefs and our freedom,” said Maryna Viazovska.

She also thanked the support received in these “dark moments”. “I believe we will rebuild peace, we will rebuild our world, and certainly science and creative thinking will play an important role in that.”

Then he began to expose the magic of his mathematics.

Previous ASUS Zenfone 9: Leaked promotional video indicates design, datasheet and more
Next Fortaleza loses to Estudiantes and is eliminated from Libertadores in the round of 16 – Play