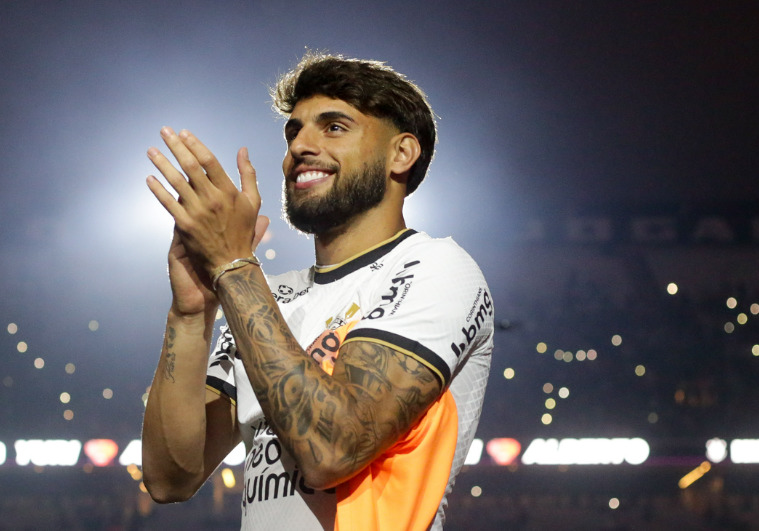 Yuri Alberto is presented at Corinthians open training to the fans; see how it was

They even tried to prevent it, but the flags appeared early this Friday night in the stands of Neo Química Arena for the first open training session of the Corinthians under the command of Vítor Pereira (to fans and the press), a way of approaching the fans after qualifying for the quarter-finals of Libertadores, last Tuesday, against Boca Juniors, at Bombonera.

Before starting activities, striker Yuri Alberto, on loan from Zenit, Russia, for a year, was presented to the crowd. With a show of lights and smoke, he entered the lawn, put on his shirt (still no number) and was cheered by the crowd. The player even made some low-keys and threw the ball to the crowd. He gave a press conference after the activities.

Yuri Alberto on the lawn! (And flags in almost every sector released) pic.twitter.com/dqKbhx5TiR

After that, the entire squad started training with warm-up, while the goalkeepers performed specific work on the other side of the lawn. The name of Cássio, hero of the classification against Boca, was greatly cheered by those present.

Then, on a reduced field, the 23 outfield players present exchanged quick passes and finished with a small goal. Willian did different training with physiotherapist Bruno Mazziotti, while Adson and Gustavo Silva did all the training with their teammates. On the other hand, Fagner, Renato Augusto, Maycon, Júnior Moraes and Luan were not present.

A collective was held in a reduced field, between teams with blue vests, with white vests and without vests. William participated in this activity without any apparent restrictions. The impression was of prioritization by exchanging quick and short touches until the goal was finalized.

The field was reduced to almost just the small area, with the same players, except Willian, who returned to do a separate specific activity. Finally, the players applauded all the crowd present, in all sectors, ending the training.

Corinthians’ next match will be this Sunday, at 4 pm (GMT), against Flamengo, for the 16th round of the Brazilian Championship, at Neo Química Arena.

All players enter the field with fireworks and light show in the Arena ⬇️ pic.twitter.com/iuvIjJucqu

Restrictions and boycott of organized

During Friday, organized by Corinthians indicated that they would not attend the open training due to some restrictions imposed by the Military Police on the event.

“In our unique and rare moment, which has become an alternative to being real fans, the São Paulo PM again interferes with its repressive and ineffective policy”, claimed the organization of Gaviões da Fiel in a published note.

Sought, the PM stated that his participation in the sporting event was requested and that meets the requirements of the Fan Statute2003. As a result, the public was smaller than the 40 thousand initially expected – Gaviões made its tickets available to the general public.

Previous 6 series and films about founders of large companies – Behavior – Estadão E-Investidor – The main financial market news
Next Is the movie about the rock star worth watching?