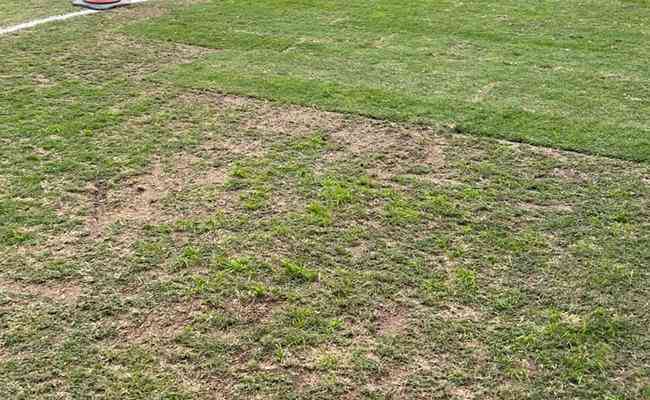 Atltico criticizes Mineiro’s lawn: ‘What is the priority of the stadium?’

Atltico expressed itself on social media and criticized the state of Mineiro’s lawn before the match against So Paulo, this Sunday (10), for Serie A of the Brazilian Championship.

Guys, what lawn is this?! The Rooster asks: are these conditions for a football match?

The leadership of the Brazilian is at stake. What should be a studio’s priority?#Rooster %uD83C%uDFF4%uD83C%uDFF3%uFE0F pic.twitter.com/XqlqqsNLb3

“Guys, what lawn is this? Galo asks: are these conditions for a football match?”, published the club’s profile on Twitter.

“The leadership of the Brazilian is at stake. What should be the priority of a stadium?”, he asked. Galo’s inquiry refers to the use that Minas Arena makes of the venue in concerts and festive events unrelated to football.

The division of the Gigante da Pampulha agenda between games and festivals has been questioned by clubs from Minas Gerais. In April, a performance by singer Gusttavo Lima affected matches in Cruzeiro and Atltico.

Despite the questioning, there has been no event on the lawn in recent days. According to Mineiro, the state of the field in the stretch photographed by the Atltico is due to the excess of games and little incidence of sun.

“Too many games. On the North side, specifically, there is no sun at this time of year and it was necessary to replant the small area,” he said.

The publication about the pitch was not the only indisposition between Atltico and Mineiro in recent days. The club repudiated through a note the joke made by the stadium’s social networks after the announcement of the new white-and-white striker, Cristian Pavn.

The day before, the profile of the Gigante da Pampulha published on Twitter: “Ai meu bebedouros”. The joke was made in reference to the confusion that Pavn and other Boca players, in 2021, after a duel with Atltico for the Copa Libertadores.

Drinking fountains and other objects were thrown by Boca Juniors players in the stadium after being eliminated by Galo in the round of 16.

Commercial director of Minas Arena, the stadium’s operator, Samuel Lloyd said in an interview with Superesportes that he “laughed a lot” at the note issued by Galo.