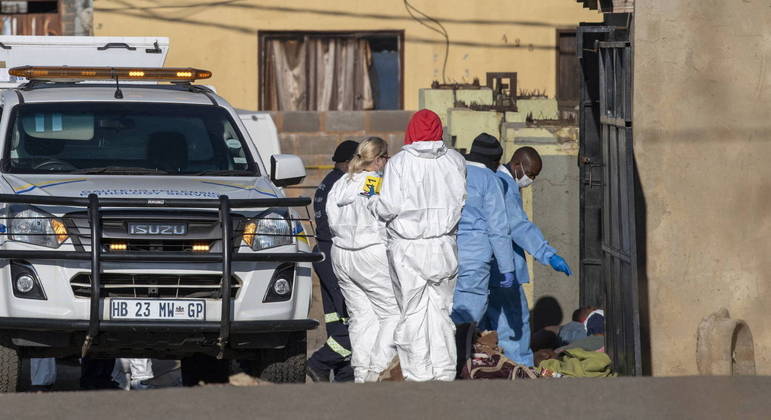 Two shootings in bars in South Africa – one in a neighborhood in the Johannesburg region and another in the east of the country – left at least 19 dead, police announced on Sunday (10).

In the Soweto massacre, in a slum near Johannesburg, 15 people died when criminals opened fire on a crowd overnight.

In the eastern city of Pietermaritzburg, in the Zulu region, four people were killed when two men shot indiscriminately at the customers of a tavern.

Police said it was too early for a conclusion, but pointed out that the two groups’ mode of operation was similar.

In the tragedy of Soweto, Johannesburg’s largest and historic suburb, the police received a phone call shortly after midnight.

“When we arrived at the scene there were 12 people dead from gunshot wounds,” said Nonhlanhla Kubheka, commander of the local police.

Eleven injured people were taken to hospital and three succumbed to their injuries, police said.

“They came and shot people who were having fun,” Kubheka, the commander in charge of security in Orlando, the Soweto neighborhood where the tragedy took place, told AFP.

The police officer added that no arrests have been made so far and that an investigation has been opened.

Hundreds of neighborhood residents gathered behind the police cordon.

The bodies had already been removed and the police took the victims’ relatives who, devastated, were trying to approach the bar.

“A group of people were drinking in a tavern and a vehicle stopped in front of the place. Two men got out of the car, entered the bar and opened fire indiscriminately against the customers,” he said.

The two incidents came a year after the most serious wave of violence in South Africa since the end of apartheid and the arrival of democracy.

In July 2021, several riots, with looting and destruction of factories, left more than 350 dead and thousands detained, amid a wave of Covid-19 infections.