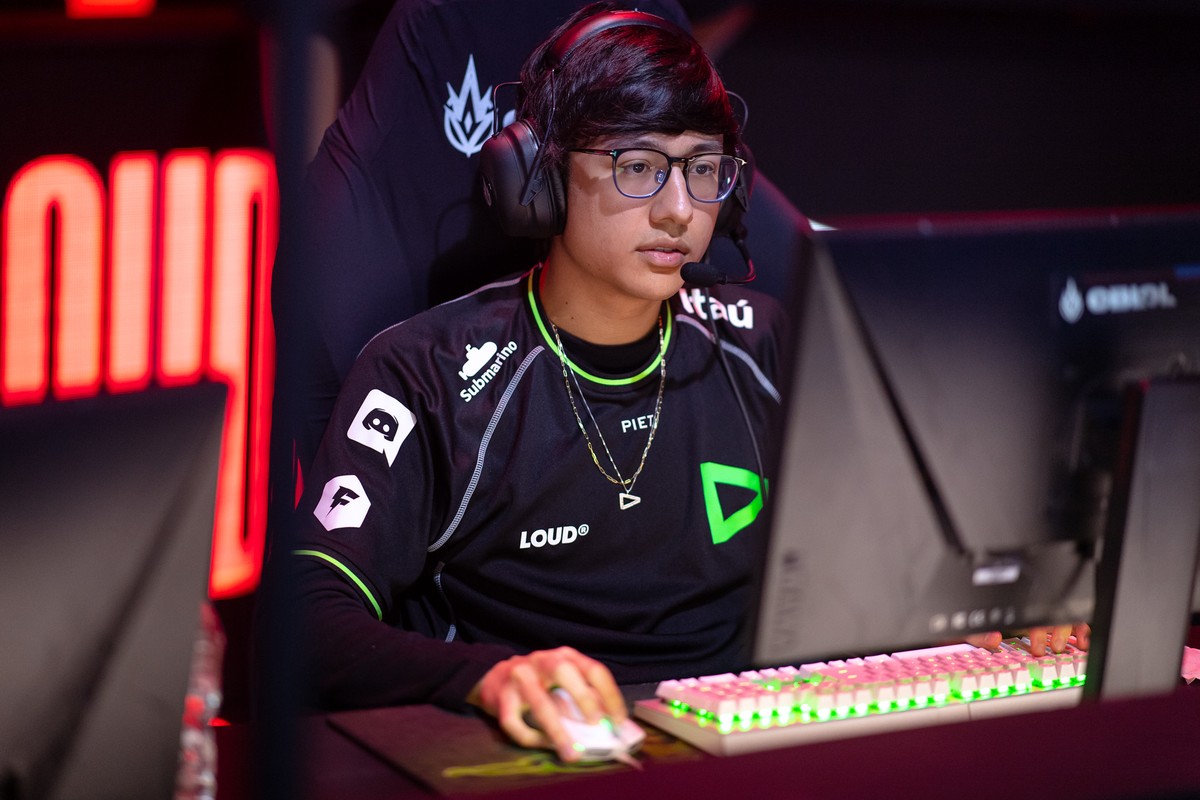 LOUD ended Week 5 of the 2nd Split of the 2022 Brazilian League of Legends Championship (CBLOL) with two losses. After losing to FURIA in the 9th round, on Saturday, the team fell to Flamengo Los Grandes in the 10th round, this Sunday. It was the first time, in this qualifying phase, that LOUD lost both games of the week, which, for midfielder Thiago “Tinowns”, represents the team’s most difficult moment in the tournament.

Tinowns, LoL player from LOUD, in the 9th round game of the 2nd Split of CBLOL 2022 — Photo: Bruno Alvares/Riot Games

In a press conference this Sunday, Tinowns lamented the setbacks, after three weeks in which LOUD had a win and a loss and another week in which they won both games.

— I think that, now, is the most difficult moment in terms of the team’s results, but I think there will be a lot for us to take away, especially from these last games of the championship, because really, if we compare with ours training, half of it is not happening, so we have to understand why. We thought we fixed it last week, but the same mistakes happened this week. It’s about focusing a lot on that, on our style of play, on improving as a team. It’s a difficult time, we’re coming off a 0-2 week, but the championship isn’t over yet. We have to remain a strong group, there’s no reason to lower our heads now, it’s not over yet. It’s to keep training, keep focused, because there’s a lot of game – declared Tinowns.

The player commented that the team is very frustrated, even more so because this week’s opponents, FURIA and Flamengo Los Grandes, are direct opponents in the dispute for the playoffs and for a direct classification to the upper bracket.

“Obviously everyone is very frustrated to have come out of this week 0-2. It was a very important week for us, because, like it or not, the table is still tangled up, Flamengo and FURIA can be direct opponents. There were two important results. In both games it was the same problems, in different ways. Yesterday [sábado] we had to speed up the game much more than today [domingo]we had a composition without “scale”, without anything, and ended up making mistakes in the mid game [meio de jogo]. And today too. I think that, sometimes, we lack a little calm for us to be able to execute the stops in our best conditions.

Even before the setback for Flamengo Los Grandes, LOUD was following a pattern of inconstancy. In the first round, Tinowns and company beat the teams at the bottom of the leaderboard, but lost to those at the top. This Sunday, LOUD lost to a team that is below.

Asked how worrying this situation is, Tinowns replied:

— For the start of the second round, I think it’s a bit of a delicate situation, to be honest, because half the championship is over, we should already be, at a certain point, better, but we haven’t managed to evolve enough for now. At the same time, these two games will show a lot, they are mistakes that happened in the championship, it’s not the same training, you’ll get a lot out of it. At the end of the day, thinking on the bright side, these are two games in which we made a lot of mistakes in the championship, so you can see a lot, both in our communication and in our style of play. There are eight more games to go, you can see a lot and still guarantee the playoffs.

Croc (center) was devastated after LOUD’s defeat to Flamengo Los Grandes in the 10th round of the 2nd Split of CBLOL 2022 — Photo: Reproduction/YouTube

Tinowns also commented on the reaction of South Korean hunter Jong-hoon “Croc”, who, after the defeat on Sunday, showed a lot of dejection on the CBLOL stage. On social media, netizens and even professional players commented on Croc’s dismayed reaction and noted that no teammate consoled him.

“It was a 0-2 week and no one expected that on our team, so at that moment when the game was over, everyone was very frustrated. I think everyone was exhaling a little bit, and Croc went in a bigger way. Obviously, when we get home, we’ll talk and sort out all these things, but at the time, everyone was very sad about the defeat, thinking about a lot of things that sometimes don’t even make sense, because of the defeat, because be mad at having lost. It’s time to relax now, get to the office [escritório] quiet, everyone sit down and talk. And putting it all out there, exchanging an idea, is the best thing we can do right now.

Previous Not exclusive? Sharp Aquos R7 has the same Sony IMX989 sensor as the Xiaomi 12S Ultra
Next Will delay: Samsung Expert RAW gets new functions, but support for more phones postponed