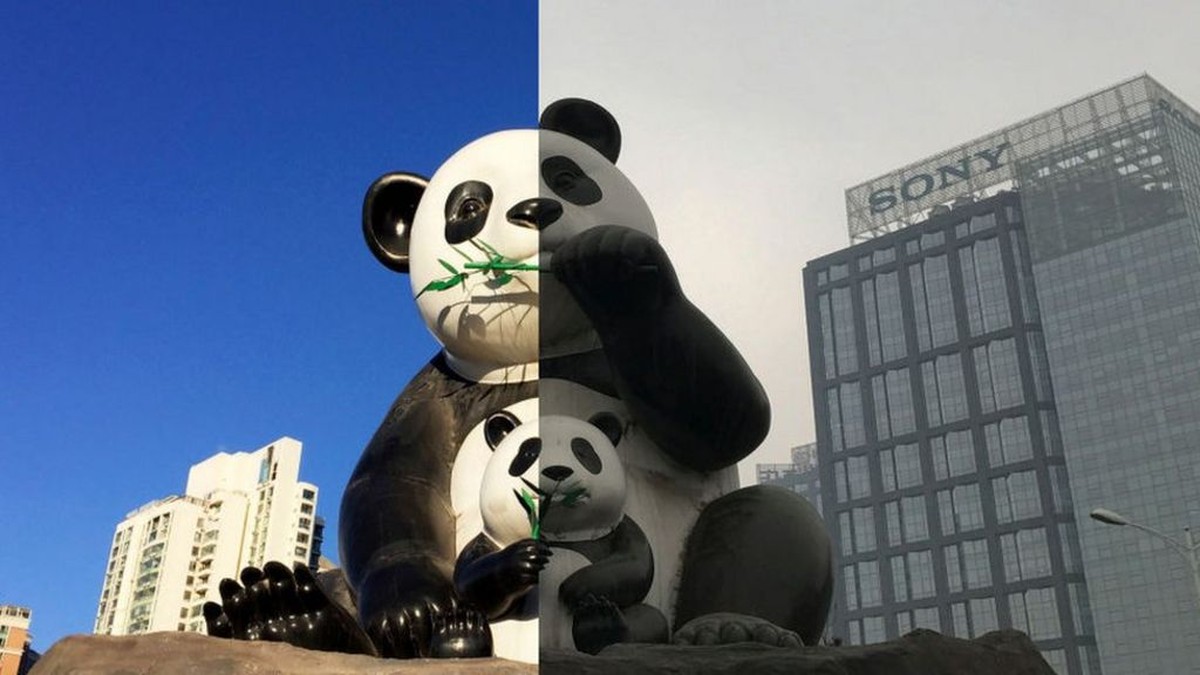 Photographs in which a dense layer of pollution prevents the sun from being seen in broad daylight were common in China in the last decade. No more.

The country reduced the amount of harmful particles in the air by 40% between 2013 and 2020according to the report presented in June by the Energy Policy Institute at the University of Chicago (EPIC), in the US, which carries out satellite measurements.

It is the biggest reduction in environmental pollution in a country in such a short period of time.

In fact, it has taken the United States three decades to achieve a similar goal since the historic Clean Air Act of 1970.

How did China manage to do this in such a short time?

To answer this question, we first have to go back to 2013, when air pollution in the Asian country reached extreme levels.

This 2013 photograph shows extreme pollution in the northeastern city of Harbin, one of the most polluted in China — Photo: Getty Images via BBC

That year, China recorded an average of 52.4 micrograms (µg) per cubic meter (m3) of PM2.5 particulate pollutants — ten times the limit recommended by the World Health Organization (WHO) today.

PM2.5 fine particles, resulting from the combustion of waste and fossil fuels, are very harmful to health due to their high ability to penetrate the airways.

“At that time, Beijing was experiencing what we call an airpocalypse, with extreme pollution events that made people aware of the problem,” explains Christa Hasenkopf, director of air quality programs at EPIC and co-author. of the study, to BBC News Mundo, the BBC’s Spanish-language news service.

This was Beijing’s Forbidden City in 2013, on a day of heavy pollution — Photo: Getty Images via BBC

Faced with the gravity of the situation, the Chinese government has declared war on air pollution.

At the end of 2013, it activated the National Air Quality Action Plan to reduce pollution over a four-year period, with a generous budget of US$ 270 billion (R$ 1.4 trillion in current values), to which added another $120 billion in funding from Beijing.

The battle against coal

This plan set specific targets to reduce pollution by 35% over the next four years.

And enemy number one was precisely the mineral that enabled China’s rapid industrialization since the last quarter of the 20th century and became the country’s main source of energy: coal.

The government has banned the construction of new coal plants in the most polluted cities and regions and forced existing ones to reduce emissions or switch to natural gas.

In 2017 alone, 27 coal mines were closed in Shanxi province, the largest producer of this mineral in China.

In January 2018, the last coal plant in Beijing was closed, while the Chinese government canceled plans to build another 103 plants.

And it did this to the point that in 2017 renewable energies accounted for a quarter of the country’s total electricity generation, surpassing even the United States, where the percentage was 18% in the same year.

It also actively promoted nuclear power: between 2016 and 2020 it doubled its capacity to 47 GW, with 20 new plants — and by 2035 it plans to reach 180 gigawatts, almost double the current capacity of the United States.

Another measure was to reduce the sector’s iron and steel production capacity: between 2016 and 2017 alone, it decreased by 115 million tons.

And, of course, it put the spotlight on combustion engine vehicles.

In Beijing, Shanghai, Guangzhou and other major cities, the number of cars in circulation was restricted with daily quotas, and the number of new license plates per year was also limited.

That hasn’t stopped the number of cars operating in China from rising from 126 million in 2013 to 273 million in 2020, according to official figures.

Of course, with less emissions: the government tightened the rules and, at the end of 2017, suspended the production of 553 models of domestic and foreign vehicles that polluted too much.

“We estimate that China as a whole will gain 2 years in its average life expectancy if citizens continue to breathe cleaner air from 2013 levels,” said EPIC’s director of air quality programs.

Hasenkopf points out that most of the country’s major cities managed to reduce their pollution by more than the national average of 40% between 2013 and 2020.

The 2013 four-year program was followed by two more three-year plans to tackle air pollution, one in 2018 and one in 2020, which further tightened emission control measures.

On the other hand, restrictions and confinements resulting from the Covid-19 pandemic reduced industrial activity and transport, which translated into a decrease in pollution.

Asked whether this might have influenced the study’s outcome, Hasenkopf replied that the impact of the pandemic had not been specifically assessed.

She assured, however, that “the data for 2020 in China seem to fit, in general, with a constant trend of decreasing levels of pollution since 2014”, minimizing the covid factor.

China compared to the world

However, not all that glitters is gold. Despite efforts in recent years, China still has a long way to go to clear the skies of its cities.

Still, the University of Chicago study estimates that residents of the Chinese capital will live an average of 4.4 years longer than in 2013, thanks to recent reductions in particulate pollutants.

Elsewhere, the situation is much worse: in New Delhi, India, pollution reaches 107.6 µg/m3, more than 20 times the WHO recommended limit of 5 µg/m3.

Bangladesh, India, Nepal and Pakistan are the countries where the air is most unbreathable, while China, which in the last decade was included in the top five on this list, now ranks 9th with 31.6 µg/m3, according to the latest satellite data for 2020.

The United States has an average of 7.1 µg/m3. And in Latin America, Guatemala, Bolivia, El Salvador and Peru are among the countries with the highest environmental pollution, with levels between 20 and 30, while the rest are mostly between 10 and 20.

The truth is that few people on the planet can say they breathe clean air: 97% of the world’s population lives in places where the air quality is below WHO standards.

“We live shorter lives because of pollution in the air we breathe: we estimate that more than two years of life expectancy on average are lost globally because of this,” says Hasenkopf.

“This burden on our lives is greater than that of HIV/AIDS, malaria or war.”

The study’s co-author states that the best resource to reduce air pollution is not technological advances, but “a sustained political and social will to promote, finance and enforce clean air policies”.

– The text was originally published in http://bbc.co.uk/portuguese/internacional-62053174