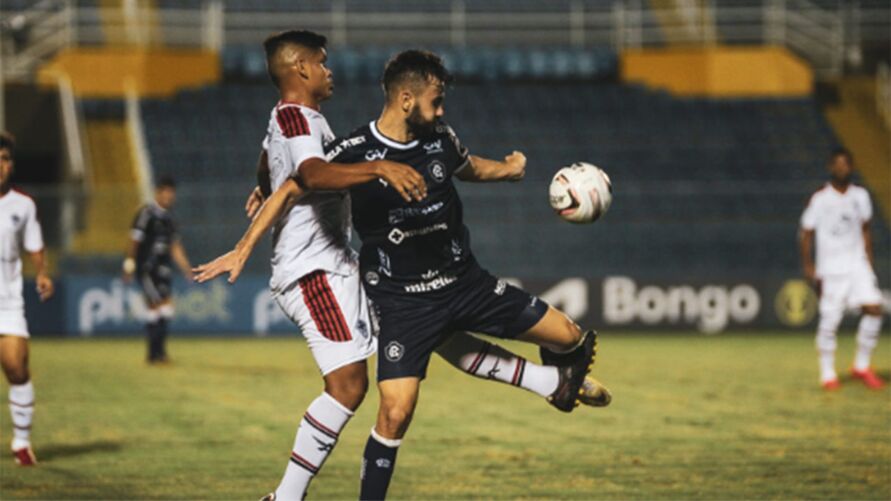 Vinicius fails and Clube do Remo loses 3×1. See the goals!

He was the lantern of the Campeonato Brasileiro Série C on the field, but Clube do Remo disappointed their fans again in Vinicius’ failure with the blue shirt.

Remo was defeated by Atlético-CE by 3 to 1, this Sunday (10), away from home and reached the fifth game without a win in the Terceirona and the worst: the shadow of the relegation zone already begins to surround the Azulino team with five to go. rounds to the end of the classification phase.

The game started with the hosts taking danger in the dead ball, but the controversy of the game came at six minutes: Vanilson plays for Rodrigo Pimpão who scores, but referee cancels the goal of Leão Azul, but the move showed the forward’s legal position.

The assistant understood that Rodrigo Pimpão was ahead of the game

The duel against the @FCAtleticoce

The Atlético-CE team offered danger in the dead balls, but the goalkeeper Vinicius guaranteed tranquility for the remists who on the offensive side scared the goal defended by Célio: first in the free kick of Marlon and then in the header of Anderson Uchoa.

In the final stage, Remo promoted entries in midfield and attack, but goalkeeper Vinicius failed again: the archer dominated and ended up being intercepted by Vanderlan who saw the ball enter. Atlético-CE 1 to 0, at 11 minutes.

Vinicius got all complicated and Vanderlan opened the scoring against @ClubeDoRemo. 1 to 0!

Dejected, Remo showed signs of weakness, but the changes took effect in the 38th minute: Brenner serves Leandro Carvalho, who kicks and scores the first goal with the blue shirt. 1 to 1

The visitors’ very well-crafted play ends with a good conclusion by Leandro Carvalho: 1 to 1 against @FCAtleticoce!

The point was guaranteed, but Remo failed again and conceded two goals: first a beautiful goal from Wilker and soon after with Vitinho who closed the coffin of Leão Azul.

Wilker drops the defenseless bomb on Vinicius. 2 to 1 against @ClubeDoRemo!

On the counterattack, Vitinho took advantage of Vinicius’ rebound and made it 3-1!

The setback is the fifth game without a win for Remo, which is now in danger and is close to the relegation zone, as Leão is four points away from Z4, while Atlético-CE left the lantern and occupies the 18th position.

In the next round, Atlético-CE faces Brasil-RS, away from home. Remo hosts ABC-RN, at the Baenão stadium, in Belém. The games will be next Sunday (17).

Previous Uber broke laws and deceived police, says newspaper – 07/10/2022 – Mercado
Next Why Venezuelans are returning to the country after historic exodus