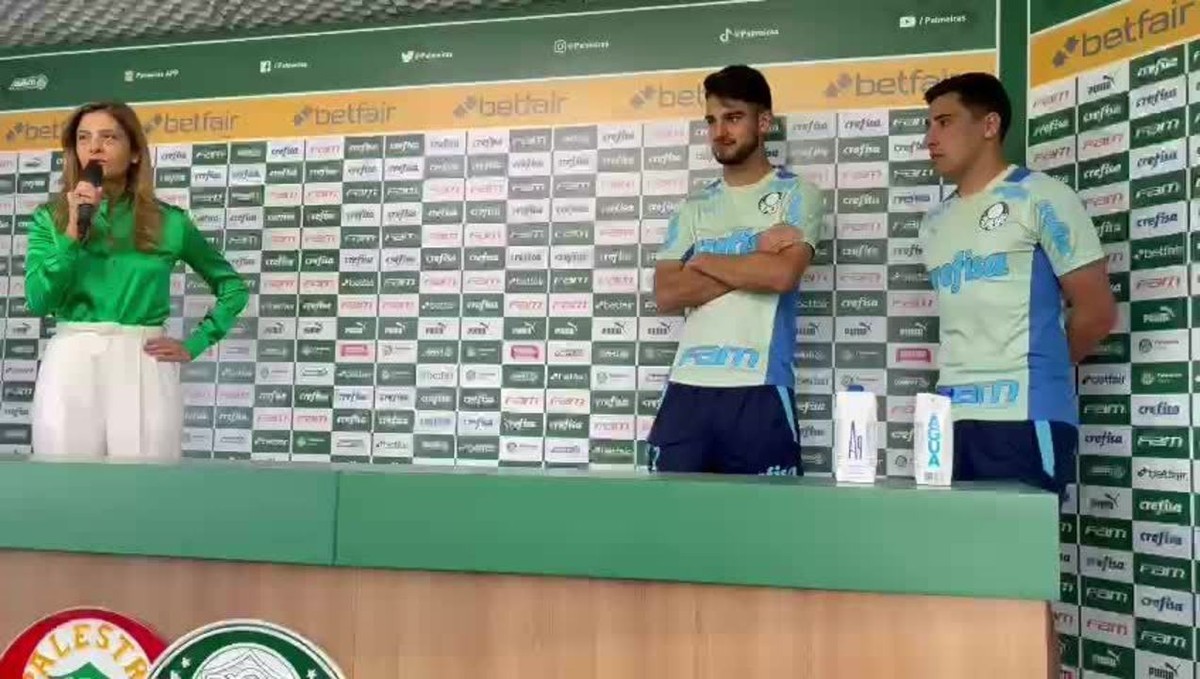 Double dose! López and Merentiel are introduced and say they can play together at Palmeiras | palm trees

After so much searching for a striker, Palmeiras presented two this Tuesday, at the Football Academy. Argentine José Manuel López and Uruguayan Miguel Merentiel wore the club’s shirt and spoke to the press. They will be able to enter the field from July 18, the date of the opening of the transfer window in Brazil.

And they can enter the field together. The two said they see themselves in a position to form the front duo if Abel Ferreira wants to.

– It wouldn’t be a problem for us to play together. We have to train well on a daily basis, work to the fullest. Rony is having a good time, Navarro is a great striker, Flaco (López) too. He (Abel) will choose one over the other, whichever is better. We will be prepared in the best way, but it is to continue working to give the best – said Merentiel.

– We can play together. At Lanús, I’ve played with two strikers. As Merentiel said, we have to be prepared for whatever Abel needs, for the team’s moment. More than anything, whatever the team needs,” added López.

The duo has been training in Verdão since last month. The players are the main news in the Palmeiras squad for the rest of the season. They will be entered for the quarterfinals of Libertadores and for the sequence of the Brasileirão. If Verdão eliminates São Paulo on Thursday, they will also be able to play the Copa do Brasil from the quarterfinals.

– We know that we came to a winning club, every match we need to win. We are preparing for the day when we have to play, to give our best, to be able to help the team. There are a lot of good players at Palmeiras, for the club to take as it takes every tournament. We’ll try to prepare as best we can so that we’re ready for whatever day is needed,” Merentiel said.

– It’s a huge team, seen all over the world, it’s always winning things. The moment I decided to come here, I put that in the balance. I wanted to win things, titles, with all the pressure from the fans, the pressure of being at a big club like Palmeiras. It’s about enjoying it to the fullest,” said López.

López, in his first statement, spoke about the pressure of being the club’s sought-after centre-forward.

– There is this pressure, it is normal in a big club, where the initial objective is to fight, to be champion. It’s normal, these are moments that players live. I’m very happy that they hired me, that they decided to make this bet. It’s about doing things right. I am very happy to be here – said the striker, who received the number 18 shirt.

Merentiel, the new owner of number 9, said he felt comfortable in the early days of Palmeiras. He said that he spoke to Lucas Barrios, a former alviverde player, to find out what the club was like.

– When Palmeiras became interested in me, the first thing I did was talk to Lucas Barrios, who played here, played for Defensa (y Justicia) with me. He spoke very well about the club. Impressions are very good. I’m very comfortable. We will keep working to be ready when we go to play.

Players also talked about its features.

– I’m a player who moves a lot in the attack, I do a lot of diagonal. I will always help the team. I’ll help the team where needed,” Merentiel said.

– I can help more in the air game, I can play a little further back. But it’s being available, learning a lot. I happened to arrive here young, and I feel I can learn a lot from the great players who have the club. I know what Miguel (Merentiel) can do. He’s a huge striker, who achieved many things, and I’m going to learn a little from him,” said López.

Miguel Merential, 26, signed a contract valid until June 30, 2026. The club paid US$ 1.5 million (about R$ 7.4 million at the current price) for 80% of the economic rights. In addition to Argentina’s Defensa y Justicia, his last club, the striker has spells at Godoy Cruz-ARG, Peñarol-URU, Valencia and Lorca, both from Spain.

At 21, José Manuel López is treated in Argentina as a promising striker. With 1.88m, he has a good presence in the area, but is also evaluated with good technique to play in other roles, more in the back or on the side.

– It’s the first time I’ve worked outside the country, when I’m away from my family. All this time is for me to adapt to the city, to life, to the culture. We are getting used to São Paulo. There are many things that are similar to Argentina. Get to know your teammates, the city… And when you have to play, be 100% – said López.

For Lanús, the forward stood out last season, when he scored 14 goals in 37 matches. In 2022, he has seven goals in 19 games and was starting, completing the attack with Sand.

López and Merentiel are now waiting for regularization to debut for Palmeiras. The opening date of the transfer window in Brazil is July 18, but as the CBF requires a player to be regularized at least 24 hours before a match, the duo will only be able to enter the field on the 21st, against América-MG. , away from home, for the Brasileirão.