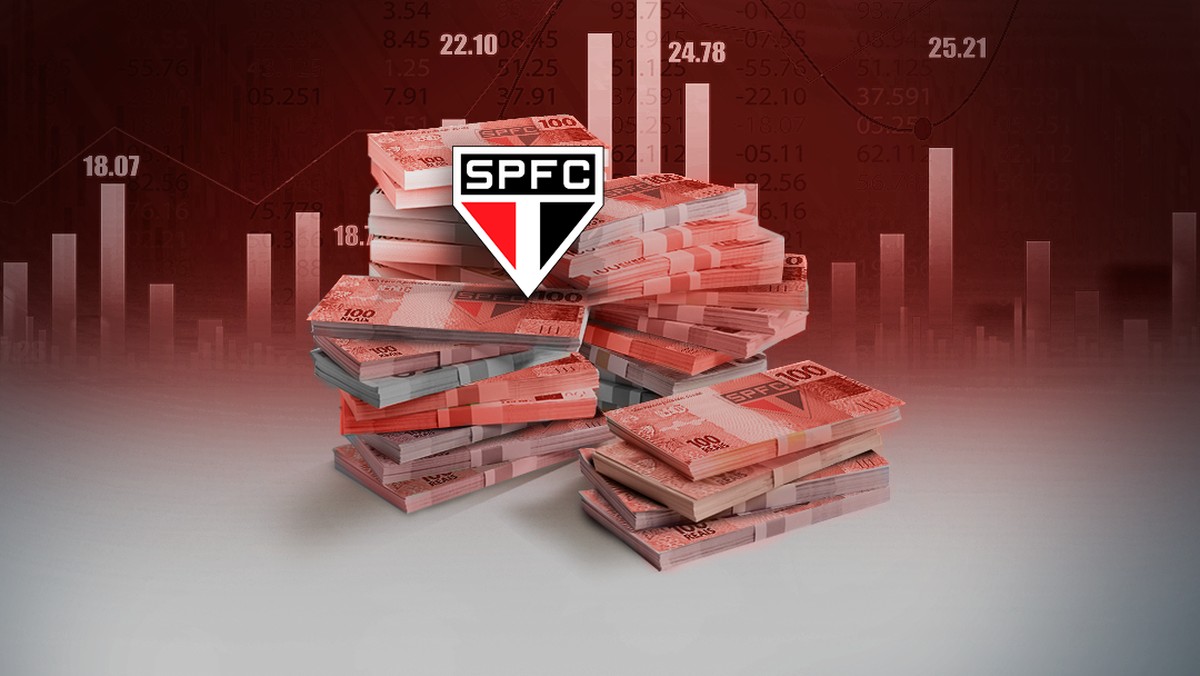 São Paulo’s finances in 2021: indebted, spendthrift and inefficient, new management keeps the club on the path of irresponsibility | sport business

Today, after a year and a half of the new president’s administration, the first results appear. The number that usually calls the attention of public opinion, the accounting result, was terrible. São Paulo had a deficit of R$ 106 million. For the first time in tricolor history, there were three consecutive losses above R$100 million.

In an interview given to the ge in March, Casares presented two justifications for this number. The first, that the deficit had been smaller than the previous year. The second, that the damage occurred because of the board’s decision not to sell the rights of some athletes.

– If we had sold two players in December, we would be here saying that we would have a slightly higher surplus. But we decided to assume a bigger deficit in this balance sheet so that São Paulo, in 2022, can move towards a much better final result.

To correctly understand the financial situation of a football club, as well as the impacts of the decisions of its managers, the analysis needs to consider other indicators. Losses tell only part of the story. In this text, ge visits the most recent financial statements, referring to 2021, to fill in these gaps.

+ Rodrigo Capelo: How not to get caught up in finance? The solution to decontextualized numbers is to ask questions

The overview of tricolor finance shows a club in crisis. If Leco had already managed to take the tricolor debt to the highest level in its history in 2020, Casares set a record once again in 2021. São Paulo approached R$ 700 million in debt.

Invoicing also increased, but the interpretation needs to take into account a particularity of accounting. Values ​​were postponed from one balance sheet to the other, because of the pandemic. Something to be clarified in the next paragraphs, as well as the nature of this recipe.

The relationship between São Paulo’s revenues and debts

São Paulo’s revenue comes from broadcasting rights and awards as its main source, something that is common to almost all clubs in the world. And it was also the line that registered the biggest increase, but with an asterisk also common to all clubs.

As 2020 competitions were only closed in 2021, because of the pandemic, a relevant part of its television revenues was postponed from one balance sheet to another. Mainly, they are payments related to the rights of the Brazilian Championship.

Under normal circumstances, the tricolor collection would have been higher in the previous year and lower in the past. This also impacts the net result, since, with atypically inflated revenues, the loss recorded by Casares on the balance sheet was lower than it should have been.

It is worth remembering that, in this line, prizes for knockout tournaments are also included. São Paulo fell in the quarterfinals of the Copa do Brasil, below the previous season, but managed to go further in Libertadores, also with elimination in the quarters.

In the commercial and marketing department, good news. Revenue increased by BRL 20 million, comparing 2020 and 2021. This area includes sponsorships, advertising and licensing.

In sources directly linked to the fans, the value was again below the historical average, but for reasons beyond the management of the club. Last year, the pandemic also prevented Morumbi from opening its gates to the fans. Only the social part, between members-supporters and associates, contributed significantly to the tricolor accounts.

The story of an administration can also be told by comparing budget (with projections made by the board before the season starts) and balance (with concrete results).

In the case of São Paulo, due to the alternation of presidents, there is a particularity. The budget was produced by the direction of Leco, and the practice was conducted by the team of Casares. It is easy to see that the new president kicked up the budget guidelines.

In revenue, marketing exceeded what was budgeted for the season. In terms of player transfers, even though the club managed to get a good value, the amount was far below what was planned. The total was only close to what had been programmed because of transmission revenues, inflated by the accounting issue already described.

The difference between projected and realized was above R$ 90 million. The new board spent much more for this purpose than the previous administration had budgeted for.

In the financial result, non-sporting items appear, mainly interest on debts and exchange rate variations. It is not possible to give more details in the case of São Paulo, because the published documentation does not contain any explanation of the nature of this record.

The net result shows the deficit (loss) for the year – much worse than what was stated in the budget, which expected a surplus (profit). This number should not be interpreted alone, to conclude whether the year was positive or negative in finance. It is the combination of several indicators that should lead the fan and the market to a more accurate notion.

Another sign that São Paulo’s accounts are not closing appears in the indebtedness. In 2021, the club once again saw its obligations hit a record – close to R$700 million.

The breakdown by maturity shows relief, at least. Short-term debt (which needs to be paid in less than one year) decreased in the last fiscal year. The entity entered 2022 with R$ 305 million to be paid during the year.

The value is still higher than it should be, as it is a club that raises around R$ 400 million and operates in the red, with equally high costs. It is still positive that the urgencies are less, in relation to what the past board left.

The lengthening of debts can be seen in two items. First, there are loans with financial institutions. São Paulo is a club that relies heavily on financing lines to cover the holes in its cash and make its investments.

In 2021 alone, BRL 172 million were obtained in new loans, while BRL 123 million were used to pay off previous credits. As the difference between one and the other is “negative”, it means that the entity’s indebtedness has increased in that specific type.

When negotiating these credits, Casares’ board of directors achieved distant deadlines. Banco Daycoval agreed to put the final date in March 2025, while Bradesco extended it until August 2026.

Since most of both loans were accounted for in the long term, the club relieves the pressure on cash immediately and gains a breather during 2022 and 2023. The problem lies with the successor in the presidency, who will have to deal with the bank obligations.

Second, in December 2021, São Paulo managed to join the Emergency Program for the Resumption of the Events Sector (Perse), created by the government to help companies in the midst of the pandemic. R$ 82 million in new tax debts were recorded in it.

These installments are also stretched over the long term. The club started the year with 59 installments payable between social security obligations and 144 installments in the others. In addition, there is still the payment of Profut, another government refinancing, in the “fiscal” item.

In the labor area, São Paulo is having difficulties. The lines “labor obligations” (with current values, that is, referring to the season itself) and “image rights” have been climbing non-stop for three years. This despite the many labor and civil agreements made in the same period. Uncontrolled costs appear in this area.

Finally, in the chart below, commitments to suppliers, other clubs and agents are classified under “others”. In 2021, the tricolor management managed to reduce the amount payable a little.

In recent years, São Paulo has created a standard in terms of finance and management. The club no longer has the highest revenue in the country, as it had in the mid-2000s, but continues to spend as if it did. Accounts are in the red. Debts are accumulating.

Reliefs that could be noticed are not exactly in the adjustment of the operation, but in the postponement of the problems. Emergencies are resolved by taking out new credit, mainly bank credit. As much as the deadlines are lengthened, one hour the bill arrives.

The worst part, for the fans and the tricolor directors, is that these high expenses were not converted into a suitable sporting performance. They weren’t with Leco, they still aren’t with Julio Casares.

In 2021, São Paulo had the fourth highest salary sheet in Brazilian football, worthy of the top of the table. Instead, the club placed 13th in the Campeonato Brasileiro and did not even qualify for the Libertadores. Sports and financial frustrations, as the prizes in dollars that Conmebol pays are lacking. It also goes for the early elimination in the Copa do Brasil, against expectations.

Then, the worst of each hypothesis is combined. Neither is the club carrying out an austere management of its resources, to lower debt and become competitive in the long term, nor is it achieving the immediate sporting results, which would help in its sustenance.

Casares’ term is three years. He will make the decisions until 2023. In the commercial and marketing area, from which he comes, the department’s profitability has improved. The manager is also intensely involved in the foundation of the league of clubs, which can unlock revenue and bring some new money to the São Paulo cashier.

The point is that the rest of the market is also acting. Opponents sought capital in the pockets of new owners, a door that the tricolor policy does not seem to want to open. The league will benefit the entire country. And good business results are only better than the record itself; the club is still lagging behind its well-heeled rivals.

With the amount of money at its disposal every year, just under half a billion reais, São Paulo is able to fit pieces in the field. Maybe even be champion, if Rogério Ceni is successful.

However, if he really wants to rebuild the club – destroyed by his predecessor – Casares will need to break with the vices that jeopardize a sustainable and winning future. Spend less, pay debts, look for long-term solutions. After his first year in office, there are still no signs that the new president is any different from those who came before him.