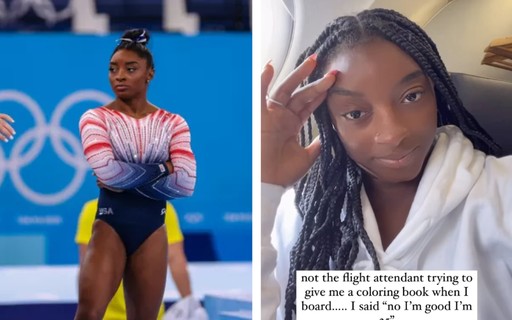 Simone Biles reveals she was mistaken for a child by a flight attendant, who offered her a coloring book – Monet

Anyone with a child’s face will feel this one on their skin. Simone Biles is an Olympic multi-medallist gymnast, she has 25 years behind her back and none of that changes two facts: she has a younger face and she is very – but very – short, only 1.42 m tall.

Well, all that said, you can’t really blame the flight attendant, who mistook her for a child and tried to give her a coloring book to distract herself on the plane.

It was she herself who revealed the hilarious situation in her Instagram stories. “The flight attendant trying to give me a coloring book when I boarded… I said, ‘No, I’m fine, I’m 25,'” the American gymnast wrote in the caption of the hilarious photo.

Simone Biles’ post also went viral on Twitter after an account shared the story. “I’m crying at the thought of a flight attendant giving Simone Biles, the most decorated gymnast in history, a coloring book because she’s 1.42m,” wrote the netizen.

According to the Daily Mail, Simone Biles was flying from Washington, D.C., back to Texas after becoming the youngest recipient of the US presidential medal. She has four gold, one silver and two bronze medals at the Olympic Games.

In a post following, the athlete said that another stewardess offered her a drink: “I’m free”, joked Simone Biles before admitting, however, that the flight professional confirmed if she was of drinking age.