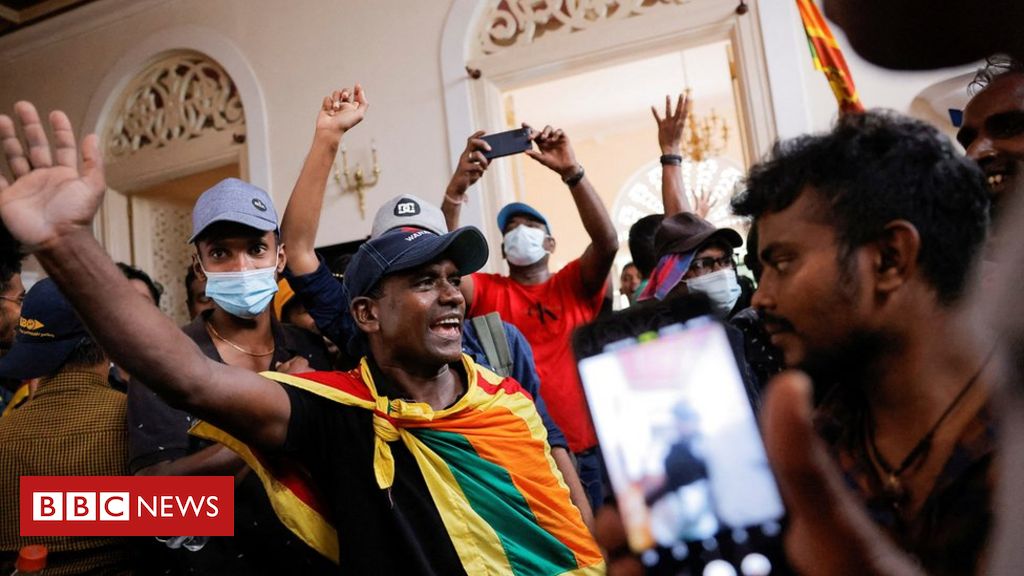 Sri Lanka: Understand the crisis that led to the invasion of the presidential palace and the fall of the government

The small island country of Sri Lanka, south of India, has made headlines around the world in recent days after a group of protesters stormed the presidential residence and set fire to the prime minister’s house to demand a change of government.

Footage broadcast around the world showed some of the protesters swimming in the presidential pool.

Although neither of the two politicians was threatened by the act, as they were not in their homes at the time of the invasions, the situation ended with President Gotabaya Rajapaksa saying he will step down.

“Rajapaksa has officially informed Prime Minister Ranil Wickremesinghe that he will resign as previously announced,” said a statement from the prime minister’s office released on Monday.

He is believed to be stepping down later this week.

Rajapaksa, who has faced pressure to resign for months as the country grapples with its worst economic crisis on record, had already signaled his intention to resign on July 13 over the weekend, but did not address the public or send a letter of resignation. .

But why did this Indian Ocean country, inhabited mainly by three different ethnic groups, reach such a point of instability? Understand:

Thousands of protesters from different parts of the country gathered in the capital Colombo on Saturday (09/07).

President Rajapaksa left his official residence on Friday as a precaution as protests were announced in the city, Defense Ministry sources told Reuters news agency.

The BBC was unable to confirm where the president is now.

Protesters began their advance towards the presidential residence on Saturday morning, passing through checkpoints. Then hundreds of protesters entered the residence, shouting and waving the national flag.

Something similar happened in the prime minister’s residence who, a few hours later, announced his resignation to create a coalition government and guarantee the safety of citizens.

Shortly after the announcement, however, videos began to circulate of the minister’s residence in flames. The fire is believed to have been caused by protesters.

Other videos posted on social media showed people walking around the presidential residence and some swimming in the pool. Others emptied drawers.

Why are they protesting?

The protests that were seen across the world this weekend in the capital, Colombo, have taken to the streets for months.

Sri Lanka is currently in a serious financial crisis and does not have access to foreign currencies such as the dollar or the euro to pay for its imports – which include food, medicine and fuel.

Less than a week ago, the Sri Lankan government announced that it did not have enough foreign currency reserves to import fuel and that gasoline and diesel reserves would last for a few days if normal consumption levels were maintained.

Thus, in an attempt to contain the crisis, the authorities implemented a ban on the sale of gasoline and diesel to private consumers, becoming the first country to implement this measure since the 1970s.

This has led to Sri Lankan schools closing, and authorities have asked the country’s 22 million people to work from home.

Why is there a crisis in the economy?

Sri Lanka’s foreign exchange reserves are virtually empty and the country is facing the consequences of rising inflation — some food, medicine and fuel are in short supply.

In May, for the first time in its history, the country defaulted on its share of its foreign debt.

The government attributes the crisis to the coronavirus pandemic, which has hit the tourism sector, one of its main sources of revenue.

In addition, he said that tourists are afraid to travel to the country after a series of bomb attacks on churches that took place in 2019.

However, some experts argue that the real problem is fiscal mismanagement.

Toward the end of its civil war in 2009, Sri Lanka sought to focus on supplying goods to the domestic market rather than trying to sell its goods in foreign markets.

Sri Lanka currently imports US$3 billion more in products a year than it exports. That is why, according to economists, it ran out of foreign currency.

In addition, the government has run up huge debts with other countries, including China, to finance what its critics call “unnecessary infrastructure projects”.

Much of the popular anger over the economic crisis has been directed at President Gotabaya Rajapaksa and his brother, Mahinda, who was prime minister but resigned in May.

Force of the people presses for the overthrow of president

These are extraordinary times in Sri Lanka.

After a day of fury and violence, the country’s two highest leaders announced their resignation.

The news sparked celebration at the main protest site in Colombo. Fireworks were heard throughout the city.

I am in Galle Face, the site of the protest, where many have started to return home, although thousands more still remain here. Some are singing and playing musical instruments, celebrating.

It is surprising how the situation has changed. A few days ago, a photo of President Gotabaya Rajapaksa and Prime Minister Ranil Wickremesinghe smiling in parliament circulated on social media.

Many expressed their anger, saying they both looked happy as millions struggled to eat three times a day. But a week is a long time in politics.

I saw President Rajapaksa at the height of his power. He was a ruthless man and much feared. No one, including journalists, would want to see one of his rages.

That the president has now fled his official residence is a dramatic thing that could not have been imagined a few months ago.