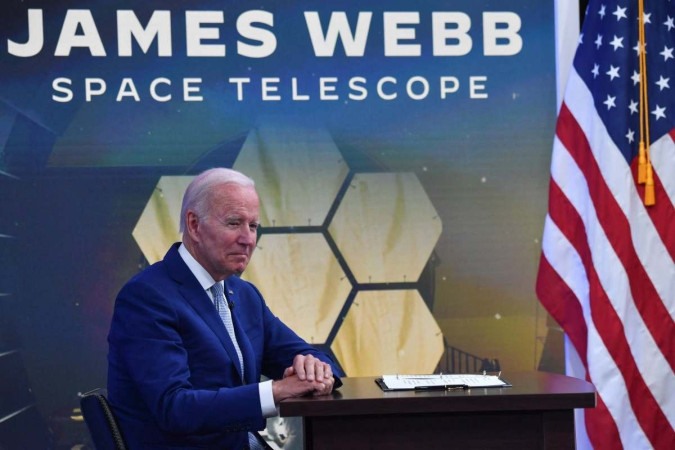 “We go places no one has ever been,” says Biden after 1st Webb image


US President Joe Biden unveiled the capture alongside NASA Administrator Bill Nelson at an event at the White House – (Credit: Nicholas Kamm/AFP)

“We’re going to places no one has ever been,” President Joe Biden said in announcing the first image from the James Webb telescope, released this Monday (7/11). Eagerly awaited by the scientific community – and enthusiasts of the subject -, the release of the photo could change the understanding of space. The image is a record of the deepest region of the universe ever observed by humans, it is the galaxy cluster SMACS 0723.

US President Joe Biden unveiled the fundraiser alongside NASA Administrator Bill Nelson at an event at the White House. Biden praised the project: “It’s amazing for me to see this technology. To see where the stars were born. When this image is released to the world, it will be a huge step forward for humanity.”

He added: “There is nothing beyond our ability. We go to places where no one has gone before. America is ruled by one word: possibility.” On twitter, the president of the United States said that the image represents a historic moment for science, technology, astronomy and space exploration.

The first image from the Webb Space Telescope represents a historic moment for science and technology. For astronomy and space exploration.

And for America and all humanity. pic.twitter.com/cI2UUQcQXj

The James Webb telescope, launched into space on December 25, 2021, is able to capture information in the red, near-infrared and mid-infrared light spectra. The whole expectation around the telescope is, therefore, in the possibility of observing distant elements of the Universe, and understanding the origin of stars, galaxies and black holes.

In practice, what you see in the image released this Monday (11/07) is the galaxy cluster SMACS 0723. It is known for its mass, with its central galaxy weighing 358 billion times the mass of our Sun. SMACS 0723 is located 4.2 billion light-years away and its enormous mass distorts space-time, acting as a gravitational lens that magnifies background galaxies that are much fainter and much further away.

You can watch the full broadcast below:

The photographs that will be known this Tuesday (12/7) were not taken at random. NASA scientists have chosen five space targets that have indicators to provide new insights into the Universe.

The first location is the Eta Carinae Nebula, one of the largest and brightest in the sky. This nebula is a stellar nursery, among its tufts and clouds new stars are born. It is located 7,500 light-years from Earth.

Another nebula that will also be revealed is NGC 3132: Southern Ring Nebula, about 2,000 light-years away. It is an expanding shell of gas from a binary stellar system where a star has lost its gaseous envelope and turned into a white dwarf.

The third focus is the exoplanet WASP-96b. JWST will only take a spectrum of it, to understand in detail the composition of its atmosphere. This distant world is located 1,150 light-years from Earth. It has half the mass of Jupiter, but orbits its star in just 3.4 days. In 2018, it was determined that this was the first cloudless exoplanet.

A little further away, Stephen’s Quintet, one of the oldest known compact groups of galaxies, will also be revealed. They have been interacting with each other for eons creating structures filled with cosmic activity. Galaxies are located 290 million light-years away.

Lastly, SMACS 0723, a galaxy cluster known for its mass, with its central galaxy weighing 358 billion times the mass of our Sun. It is located 4.2 billion light-years away and its enormous mass distorts space-time, acting as a gravitational lens that magnifies background galaxies that are much fainter and much further away.

Previous With Méndez coveted in the market, Corinthians’ old desire, 24-year-old defender is free in the market
Next With rare injury and two games in a year, Berro leaves America