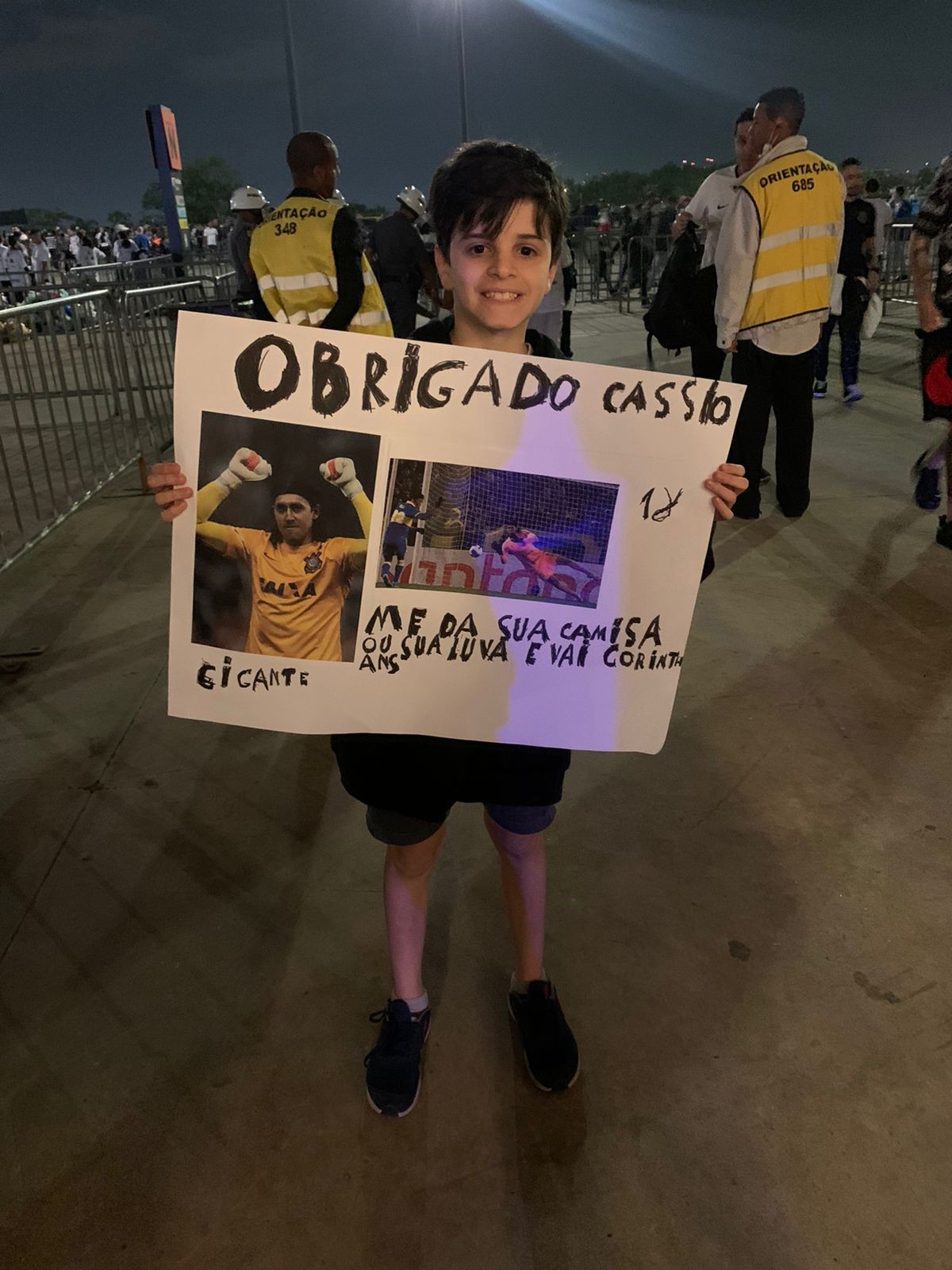 What harm can there be in a poster written by a child and taken to a football stadium to send a message to an idol?

In Corinthians’ open training session at Neo Química Arena last Friday, the Military Police barred the entry of a cardboard taken by nine-year-old Diego Maia. The sheet had two photos of the goalkeeper, a message and a request: “Thank you, Cássio. Can I have your shirt or your glove? And go Corinthians!”

A child had a vetoed poster at the Neo Química Arena — Photo: Personal archive

The case gained social media when it was disclosed by the boy’s father, Daniel Maia. On the same day, another child managed to enter with a poster and even won a shirt from midfielder Willian. Something that, in the view of the Military Police of São Paulo, happened in an irregular way.

The boy’s father, Daniel Maia explained how it all happened:

– Diego spent the whole afternoon making the poster to take to the Arena and show it to Cássio. When we arrived at the Arena, he was going to go in with my wife, but the woman from the magazine said she couldn’t go in, that she had to ask the police. He went, the policeman asked to see the poster, but he didn’t release the entrance. He was upset because, upon entering, he saw other posters.

The repetition of vetoes of this nature is noteworthy. At the end of June, in the game in which Corinthians drew goalless against Santos for the Brasileirão, a fan also had her poster barred.

Vanessa left Londrina and, after a 10-hour bus trip, arrived in São Paulo to watch the game and pay tribute to her father, who died on a game day between the two teams. The gesture, however, did not sensitize the police. The board of Corinthians, seeing the repercussion, invited the supporter to record a video.

Vanessa and her poster before Corinthians vs Santos — Photo: Marcelo Braga

Seeking explanations, the ge contacted the Military Police in São Paulo. By phone, Lieutenant Wesley Xavier said that the PM strictly complies with the Fan Statute and claims that the same procedures have been adopted for many years.

– The PM has been acting like this since 2003. Article 13 of the Fan Statute talks about access and permanence conditions and prohibits the entry of flags, poles, bamboo, posters. You can’t, if there’s a poster inside the stadium, it entered irregularly. It’s not authorized,” said the lieutenant.

In a note sent to the ge in June, the São Paulo Public Security Secretariat also reinforced that the PM follows the law by prohibiting the entry of posters.

“The Military Police clarifies that in possession of its legal attributions, it complies with what is determined by Federal Law No. 10.671/03, State Law No. objects, such as paper, bottles, fireworks, firearms or white weapons in football stadiums in the State of São Paulo.”

In the Fan Statute, paragraph IV of Article 13-A says that one of the conditions of access and permanence is “not to carry or display posters, flags, symbols or other signs with offensive messages, including those of a racist or xenophobic nature” (see text below).

In the view of lawyer Rodrigo Marrubia, who is a specialist in sports law and a partner at Carlezzo Advogados, there is an excess of rigor that can be explained by a logistical decision:

– From a legal perspective, posters with provocation towards rivals are considered offensive and, therefore, there is no question. As for the ban on posters with messages of love for the club or shirt requests, this could be considered exaggerated, even going beyond what is determined by law, as there is no ban.

– However, the attitude can be understood from the logistical issue. Imagine that every fan decided to take a poster, one with an offensive message, the other with love for the club and it was up to the police to check one by one. It would generate a huge queue and would leave it up to the police to decide whether or not they could and would be subject to arbitrariness. Therefore, to avoid this situation, they prohibit it so that no verification is necessary – evaluated the lawyer.

Wanted, Corinthians says it is in favor of the party in the stands and expressions of affection for the club, but says that decisions on access are made by the Military Police, which follows the law in force. The club says it works for the release, for example, of flags on match days and relaxation of prohibitions such as allowing posters to enter.

Banners displayed in games against Flamengo, over the weekend — Photo: Marcos Ribolli