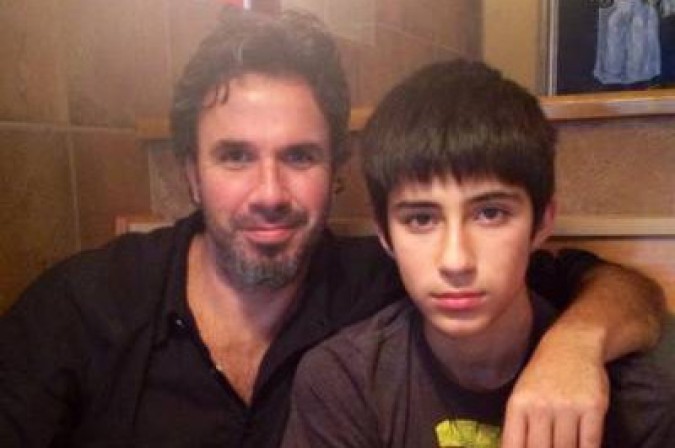 Manuel Oliver, 55, bets that Joaquín must be “very proud” of him. At 11:20 am yesterday (12:20 pm GMT), the father of the 17-year-old boy murdered in the Stoneman Douglas High School massacre in Parkland (Florida) on February 14, 2018, confronted Joe Biden. The president of the United States was speaking on the South Gramado of the White House, in front of activists and relatives of victims of armed violence, when he was interrupted by Manuel. “Sit down, you will listen to what I have to say. If you think…”, reacted the Democratic leader. “I’ve been trying to tell you this for years. You have to do more,” Manuel replied. “Let me finish my comment,” Biden urged.

Joaquín’s father was escorted out of the White House by security. In his remarks on the bipartisan gun control legislation enacted on June 25, Biden again called for an end to the trade in high-powered semi-automatic weapons. “I am determined to ban these weapons again … I will not stop until I succeed,” he said. The president is facing the worst political moment: his popularity rating is just 33%, and 64% of Democratic Party members are urging him to give up his 2024 re-election bid, according to a New York Times poll.

About eight hours after being removed from the White House, Manuel Oliver spoke to the Post. “At no point do I feel offended by being expelled. It wasn’t the first time and it won’t be the last. I believe Biden has every right to do so. I may have extrapolated the protocol of the event, but that doesn’t mean I haven’t reason to want to say what I feel and to be direct,” he said over the phone. “The fact that so many people applauded what I said shows that a lot of people are in tune with what my wife, Patricia Oliver, and I do. I was so grateful to know I’m not alone.”

For Manuel, Biden has very good intentions on the subject of mass shootings. “We’ve met in person. On more than one occasion, we’ve talked about the need for me to do my job and he his. to be done and that we cannot be mistaken, as a country, that we will solve a problem”, said Joaquín’s father. “Accepting this legislation and jeopardizing the massive movement against gun violence in the US and its ability to bring about change is a price I will not pay,” he added. He says he doesn’t regret what he said to Biden. “My petition was very clear: I simply asked him to open an office, inside the White House, that shows the Biden administration’s intention to take the matter seriously,” Manuel said.

Also according to him, the State has an obligation to ensure the safety of its citizens, and the office would seek to fulfill this role. “More than 45,000 people die each year in the United States, victims of guns. This is a huge loss for my country. Since Joaquín’s murder, more than 250,000 people have died as a result of armed violence,” he commented. Manuel thinks that, despite expressing good intentions and a lot of political experience, Biden’s hands are tied by the system. “I agree that the elimination of assault weapons from the civilian market is a very important thing. The president mentioned that after I was expelled, I wasn’t there. But he didn’t mention the need for an office to take care of that. I’m open to meeting with the president.”

The man who interrupted Biden’s speech to demand change takes care that emotions don’t contaminate reason. “I have my pain for the loss of Joaquín. I don’t want to stop having it, because it motivates me to do many things. But I take care that emotions don’t force me to be incoherent. What happened today (yesterday) in The White House was in reaction to a need for change, not a result of my pain. I believe Joaquín would do the same as me and Patricia, my wife, if we were in his shoes.”

Previous Twitter finally launches feature for you to untag yourself from inappropriate tweets
Next Natalie Portman recalls sexual criticism she received at the time of The Professional: “I was 13 years old” – Film News