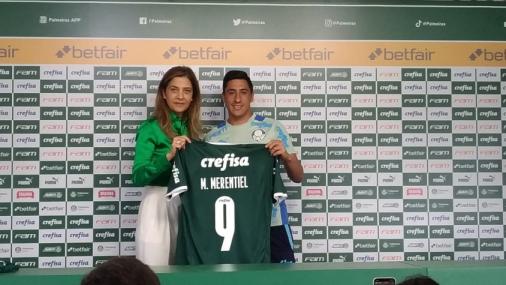 The Palmeiras fan’s wait for a number 9 came to an end. Miguel Merentiel, 26, was introduced as a player for the club this Tuesday (12), at the Football Academy, and will use the much-discussed number in question. He will be able to enter the field from July 18, the date of the opening of the transfer window in Brazil, but his debut should only take place on the 21st, against América-MG.

TABLE
> See classification and simulator of the Brasileirão-2022

The Uruguayan striker was hired by Palmeiras from Defensa y Justicia (ARG) for US$1.5 million (R$7.5 million at the time), and his presentation took place along with another Alviverde reinforcement for the attack: José Manuel López, who arrived from Lanús (ARG) and wore shirt number 18.

In his former team, Merentiel played with Lucas Barrios, a Paraguayan striker who won the Copa do Brasil (2015) and Brasileirão (2016) for Verdão. The Uruguayan revealed that, when contacted by the São Paulo club, the first thing he did was talk to his partner.

– When Palmeiras looked for me, the first thing I did was talk to Lucas Barrios, who played for Defensa with me. He spoke very highly of the club, the facilities… the facilities are very good, first class.

Alviverde fans have been clamoring for a number 9 for some time. The last one to use the number was Deyverson, but only in the Libertadores dispute. Now, Merentiel says he’s happy with the choice.

– About the numbers, they were the ones they had for us. There wasn’t much variety in numbers. That’s what the club offered us. Today I am at 9, and Flaco at 18, we are happy to have these numbers.

The Uruguayan did not get tired of praising the facilities of the Football Academy and did not hide the emotion of being part of the two-time champion team of America. According to the striker, who already considers himself adapted to Brazil, in several spheres Verdão has a ‘very high level’.

– It’s a big deal. It is a team that is at European level, both in the facilities and in the team, technical staff. Very high level. We are very happy to be here. The trip to Brazil is being productive, I had already left home, my country. We are adapted. I’m with my wife here, with my family here in Brazil. Very happy to be part of Palmeiras, they treated us in the best way.

Something that helped the reinforcement to adapt was the welcoming of the cast mates. He was surprised by the humility of everyone’s reception and even mentioned the jokes with Gustavo Scarpa, known for ‘picking up’ the team’s foreigners.

– Scarpa, makes a lot of jokes, brightens the atmosphere, received me very well. When you arrive at a team as big as this one, you think: ‘How are we going to find our teammates?’ And they welcomed us very well. I was impressed with the reception of the players. In such a big club that wins titles and receives it so humbly. It touches the heart. We play a lot with Scarpa, he makes a lot of jokes. Everyone received us very well, including those from outside: Gustavo (Gómez), Piquerez, Atuesta, Kuscevic… We are always there speaking in Spanish and gradually understanding Portuguese. We are very happy with how everyone welcomed us.

CHECK OUT OTHER INTERVIEW TOPICS BELOW:

games with palm trees
– I met Palmeiras a few times. I didn’t all play, once it was in the Recopa, there was no audience. It was something different for everyone. I played with the public when I was at Godoy Cruz, it was very good. Working on a day-to-day basis so that when you play, be prepared.

What do you hope to learn in Brazilian football and with Abel Ferreira?
We know we came to a winning club, every match we need to win. We are preparing for the day when we have to play, to give our best, to be able to help the team. There are a lot of good players at Palmeiras, for the club to take as it takes every tournament. We will try to prepare in the best way to be prepared on the day it takes.

Features
What you’ll see from me is a player who moves in the attack, always tries to diagonally. I will always be there to help the team, as much as (forward of) craft. Help the team where needed. We’re just waiting to get on the field and be in the games.

Can Merentiel and López play together?
We would get along really well if we played together. The focus is on everyday life, working to the fullest. We have Rony in great shape, Navarro is a very good striker, Flaco is another good striker. As the coach needs, as well as how the game is, he can choose one or the other, or whichever is better. And we will be prepared for the day when we have to join the team and give our best.

Abel Ferreira
– The first contact with Abel was very good. He received us in the best way, he gave us instructions on how the team plays. You have to work day by day to earn your place. And we are working to take place. I’ve faced Palmeiras, it’s a great team, we played when I was at Defensa. The matches were complicated, some won by Palmeiras, others by Defensa. In the end, they were very good matches. It’s a team with a game similar to Defensia, which makes it a lot easier for me to play.

Reason for choosing Palmeiras over other clubs
– We got a lot of offers, both for me and I suppose Flaco too. For the moment we were living. Coming to the two-time champion of America, who won the Lubertadores twice in a row, is very impressive. It motivates a lot. It motivates to come, to help the companions. Personally, when that option came, I was sure and convinced that I should come here, be here. I am very happy to be in the two-time champion of America. May we continue to get titles and achieve more. We will continue to deliver as much as possible to be prepared.

Childhood idol and reference in Brazilian football
– In my childhood, I had references from Uruguayan players. Like Forlan, Suarez, Cavani. Here in Brazil, the ones that always impressed me a lot were Ronaldo and Ronaldinho, players we saw when we were kids. They are players that impressed me a lot. In my career and in my life.

Previous Aneel reduces electricity bills by up to 5.26% in eight states; see list – News
Next Experts discover more than 500 vulnerabilities in routers since 2020