See the video of Vidal’s announcement for Flamengo

The Chilean midfielder, who will wear the number 32 shirt, was at Maracanã to watch the game and went to the pitch before the match to be greeted by the fans.

+ Gabigol provokes Atlético-MG after classification: “I told you so”

This Wednesday’s match was Vidal’s second in the Maracanã box since the match. A week ago, on the 6th, he was at the stadium to watch Flamengo’s 7-1 victory over Tolima, for the Libertadores round of 16. Between the two matches, he traveled to Italy to sign the termination with Inter Milan.

Vidal greets Gabigol before the match between Flamengo and Atlético-MG – Photo: André Durão

Revealed by Colo-Colo, Vidal moved in 2007 to Europe, where he spent 15 years. His first club in the Old Continent was Bayer Leverkusen. He then defended Juventus, Bayern Munich, Barcelona and Inter Milan. He won nine national titles (five Italian, three German and one Spanish). Last season, he scored two goals in 41 games for Inter.

For the Chilean national team, Vidal was a fundamental part of the best generation in the country’s football history. He won two Copa América titles (2015 and 2016) and played in two World Cups (2010 and 2014) – in both, Chile was eliminated in the round of 16 by Brazil. 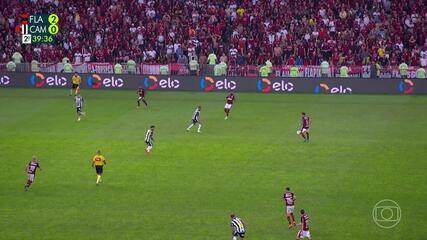 Best moments: Flamengo 2 x 0 Atlético-MG, for the round of 16 of the Copa do Brasil

Vidal is the second player announced by Flamengo to defend the club from July 18, when the transfer window opens. Before him, Rubro-Negro had agreed to hire striker Everton Cebolinha.

The red-black board is still in the market and promises to make more hires until the closing of the window, on August 15th. At the moment, the club is negotiating with two midfielders: Wallace from Udineseand Zenit’s Wendel.