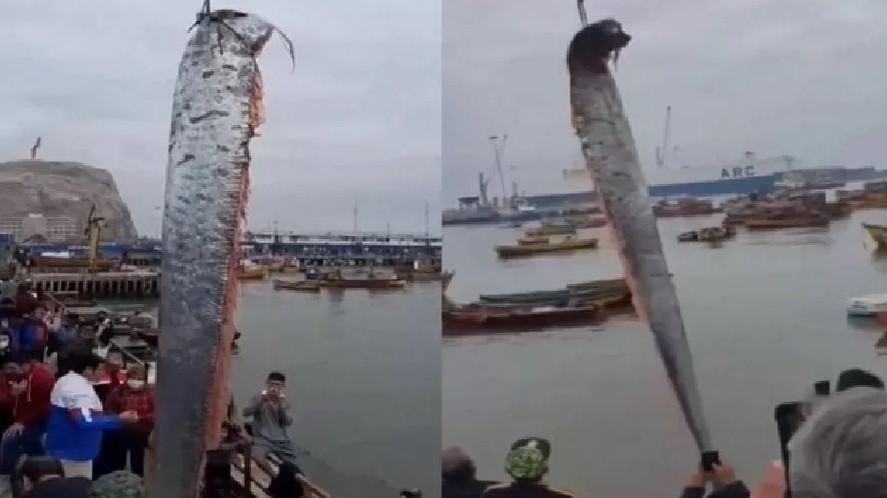 A huge paddlefish was caught by fishermen in Arica, on the coast of northern Chile, on Monday (11). The presence of the strange creature has left locals stunned by the significance it carries in local traditions.


Despite the feeling of pride on the part of some fishermen, local people were apprehensive about the appearance of the oarfish, as it is considered a harbinger of natural disasters such as earthquakes and tsunamis. Therefore, he is seen as a bad omen, according to a Japanese legend that also circulates in Chile.

According to Argentine newspaper Página 12, the silver-scaled fish measured about 5.80 meters in length, a size considered atypical for a species that is usually 3 meters long.

The moment of capture was recorded and shared on social media.

The episode brought to the memory of the population an event on June 11, 2020, when an oarfish was found in Cozumel, Mexico, and ten days later there was an earthquake measuring 7.5 degrees on the Richter scale. Then the authorities issued a tsunami warning in several Mexican cities and other nearby countries.

This belief is rooted in legends that paddlefish, whose species lives between 200 and 1,000 meters deep, only run aground on shores before underwater earthquakes.

Beliefs around oarfish were amplified after some were seen before the 2011 Fukushima earthquake and subsequent tsunami, which killed more than 20,000 people.

Therefore, the myth created among the Japanese indicates that when the capture of this fish is abundant, natural disasters will be overwhelming. But scientists dispute these claims.

In 2019, when two oarfish were caught in Japan, Uozu Aquarium keeper Kazusa Saiba told CNN: “There is no scientific evidence for the theory that oarfish appear around large earthquakes. But We cannot 100% deny the possibility”.

It is estimated that oarfish only return to the surface when they have some disease, are on the verge of death or are breeding. However, these possibilities also reinforced the theory that their appearance in coastal areas may be related to the effects of changes in climate and water temperature, although this has not yet been confirmed by experts.

Previous Steam Deck Competitors Negotiate With Valve to Use SteamOS
Next Bullet Train: Brad Pitt and Cast Get Manga-Style Posters – Check It Out!