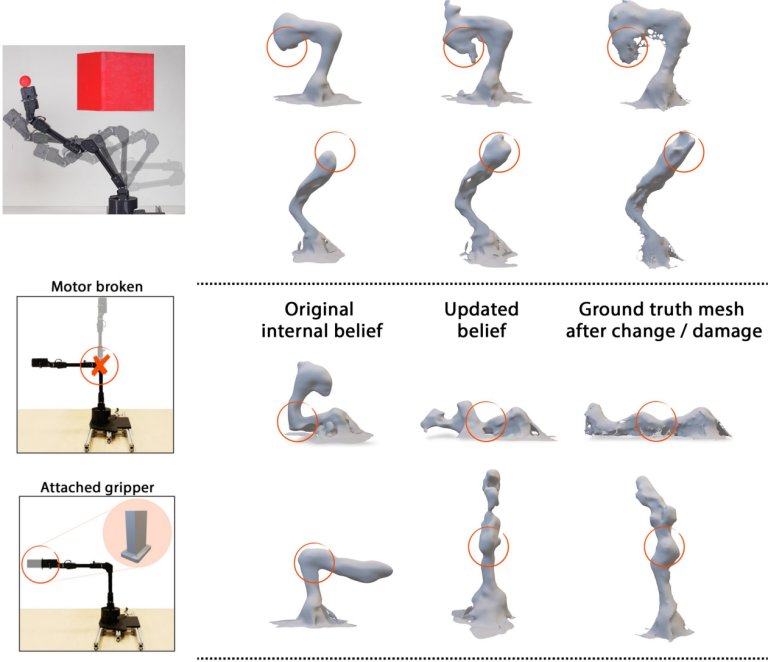 Rob learns to imagine himself and body image

Body image is commonly associated with vanity, but in fact it is essential for even our most unconscious movements.

When you dress up or play ball, your brain is constantly planning ahead so you can move your body without bumping, tripping, or falling.

We humans acquired our body model as babies, and robots are following suit. Engineers claim to have created a robot that – for the first time – is able to learn a model of its entire body from scratch, without any human assistance.

In the demonstration, the robot created a kinematic model of itself and then used its self-model to plan movements, achieve goals and avoid obstacles in various situations – it even automatically recognized itself and compensated for damage the researchers induced to its body.

Learning to be a robot

The robot – specifically a robotic arm – was placed inside a circle surrounded by five video cameras. Its control program was observed through the cameras as it moved freely, without a specific task or by commands.

Like a child exploring himself for the first time in a room of mirrors, the robot squirmed to learn exactly how his body moved in response to various motor commands. After about three hours, the robot stopped. Its internal deep neural network had finished learning the relationship between the robotic arm’s motor actions and the volume it occupied in its environment.

By checking the body image the robot had created of itself, the team found that it reproduced itself and its surroundings with a 1% error rate.

“Self-modeling is a primitive form of self-awareness. If a robot, animal or human, has an accurate self-model, it can function better in the world, can make better decisions and has an evolutionary advantage,” said Professor Hod Lipson of the University of Columbia, in the US, whose team has been working for years trying to create self-aware robots.

The researchers claim to be aware of the limits, risks and controversies surrounding the granting of greater autonomy to machines through self-knowledge.

And Lipson is also quick to admit that the kind of self-awareness demonstrated in this study is, as he noted, “trivial compared to humans, but you have to start somewhere. We have to proceed slowly and carefully, so that we can weigh the benefits.” and minimize the risks.”

About a month ago, a Google engineer nearly lost his job claiming that the LaMDA artificial intelligence program had become sentient. At the time, the scientists heard on the matter said that the claim would not have support, some calling it “nonsense”.

Previous “They would be getting ready”; Pablo Solari can ‘help’ shirt 11 above average to play for Palmeiras
Next Paraguay extradites Brazilian allegedly linked to Hezbollah to US