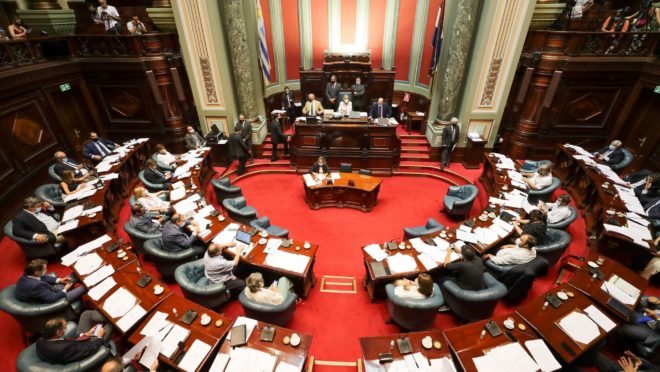 Last month, Uruguay took a decisive step towards ratifying a military partnership with China and then stalling the discussions, a hesitation that reflects the tensions of the so-called Cold War 2.0.

The proposed military agreement emerged from a term signed between the two countries in 2019, during the government of leftist President Tabaré Vázquez. A bill to ratify the compromise was sent to the Uruguayan parliament by the Executive in February this year.

In June, the agreement was unanimously approved by the Senate’s Committee on International Relations and an easy approval was also expected in the plenary, but the very bench that supports the center-right president Luis Lacalle Pou called for the bill to be withdrawn.

The justification was that the proposal should return to the International Relations Commission, so that Uruguayan government ministers can better detail the terms of the agreement.

The text approved by the commission and withdrawn shortly afterwards provides for cooperation in defense that will include “mutual visits by high-level delegations”, exchange of students and instructors from military institutions, transfer of war material, joint training, in addition to “coordination of international operations”. peacekeeping”, cooperation in science, technology and military equipment and in the fight against terrorism.

When the bill on the military agreement was withdrawn from the agenda, the coordinator of the National Party bench (legend by Lacalle Pou), Gustavo Penadés, alleged to the newspaper El Observador that the ministers of Defense and Foreign Affairs did not participate in the discussion that resulted in the agreement being passed by the Senate committee.

“Everything I voted for, I did by listening to those involved first. It is natural to listen to those who have direct responsibility”, added Penadés.

Daniel Caggiani, senator from the Frente Ampla, party of Tabaré Vázquez (who died in 2020), and a member of the International Relations Commission, told the newspaper La Diaria that the project’s withdrawal was influenced by “some actors” with a “very contrary to China having greater levels of rapprochement with the region”.

It is speculated that the decision to further discuss the agreement came about due to expressions of concern on the part of the US government, expressed during the Summit of the Americas, held in Los Angeles in early June.

The Americans also criticized a free trade treaty being negotiated by China and Uruguay, a target of criticism also from Argentina, which believes that this partnership would violate Mercosur regulations.

In April, Uruguayan House Speaker Ope Pasquet, of the centrist Colorado party, had already warned that the free trade agreement being negotiated with China needed to be reconsidered due to the Ukraine war.

China is Russia’s main geopolitical partner, and while it is not helping Moscow militarily, it has criticized Western sanctions on the country ruled by Vladimir Putin. Before the war, the Chinese and Russians pointed out that their partnership “has no limits”.

“It is evident that, in this new international scenario, a free trade agreement between Uruguay and China would not mean what it would have meant a year or two ago,” said Pasquet.

In addition to China’s growing economic influence in the region, the United States fears that Beijing will increase its military presence in Latin America, as it has already done in the Indo-Pacific and Africa.

In addition to ties to the leftist dictatorships in the region, Cuba, Venezuela and Nicaragua, in 2015 China deployed a space station in the Argentine province of Neuquén, a structure that Washington suspects has military purposes.

In a March statement to the US Senate Foreign Relations Committee, Evan Ellis, a researcher at the Americas Program at the Center for Strategic and International Studies (CSIS), pointed out that left-wing governments are the main buyers of weapons. in the region and warned that any rapprochement between Beijing and Latin American heads of state needs to be watched.

“The collective result of economic, military and technical support for China’s populist authoritarian friends [na região] it was undoubtedly the prolonged survival of their regimes. In the process, China has contributed to a hemisphere with fewer democratic governments, less and less willing to cooperate with the United States on issues important to our security, from transnational organized crime to migration, corruption and human rights,” said Ellis.

Although he did not mention the possibility of a military partnership between the Chinese and Uruguayans, the analyst argued that the Americans need to direct resources and efforts to the region, given that China’s alignment with Russia at a time when it promotes an invasion of a neighboring country “Creates an opportunity for the United States to remind the world that democracy, human rights and legal commitments must mean something if the global institutional order that has brought today’s security and prosperity to remain viable.”

For Daniel Runde, also a member of CSIS, China is ready “to meet the needs of many countries [na América Latina]: digital connectivity, vaccine delivery, trade and – possibly – security”.

“If the United States doesn’t find better ways to engage with the region, even with small but vibrant economies like Uruguay, China will fill that gap,” he argued, in an article published on the website of The Hill newspaper.