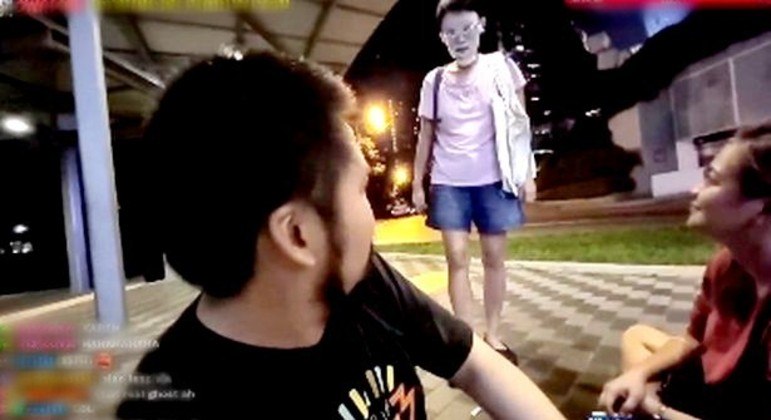 Young people who were doing a live during a tourist trip through the streets of Singapore were surprised by the presence of a strange lady wearing a mask that looks like it came straight out of horror movies.

Clarence Kang and Angie Mendoza were live streaming on a Twitch channel while eating on a street in Buona Vista, when the woman, wearing a mask that closely resembles that of Mike Myers – from the franchise halloween -, approached.


Initially, the pair thought it was a friendly approach, but soon the resident turned to violence, absolutely out of nowhere.

First, the woman made some threats. According to the translation of the Daily Star tabloid, she said the following:

Not satisfied with wanting to kick the pair’s ass, the lady went into violence: she passed between the two, clearly out of patience, and kicked a portion of fried chicken and bubble tea, famous foods in the region.

Angie said she thought it was some kind of joke, which is why she smiled at the beginning of the approach. But she said the following moments were “harrowing”.

The aggression did not stop there. The woman continued beside the two, “humming strangely”, according to them.

The attack only ended when an equally frightened passerby immobilized the woman until the police arrived.

It was not known whether the aggressor was charged with a crime or released after the arrival of the authorities.


READ BELOW: Fans are shocked to see ‘man in mask’ in selfie by Jennifer Lopez

Previous What is WhatsApp Aero and what is it for?
Next Amber Heard: Doja Cat is criticized for imitating Aquaman actress in testimony