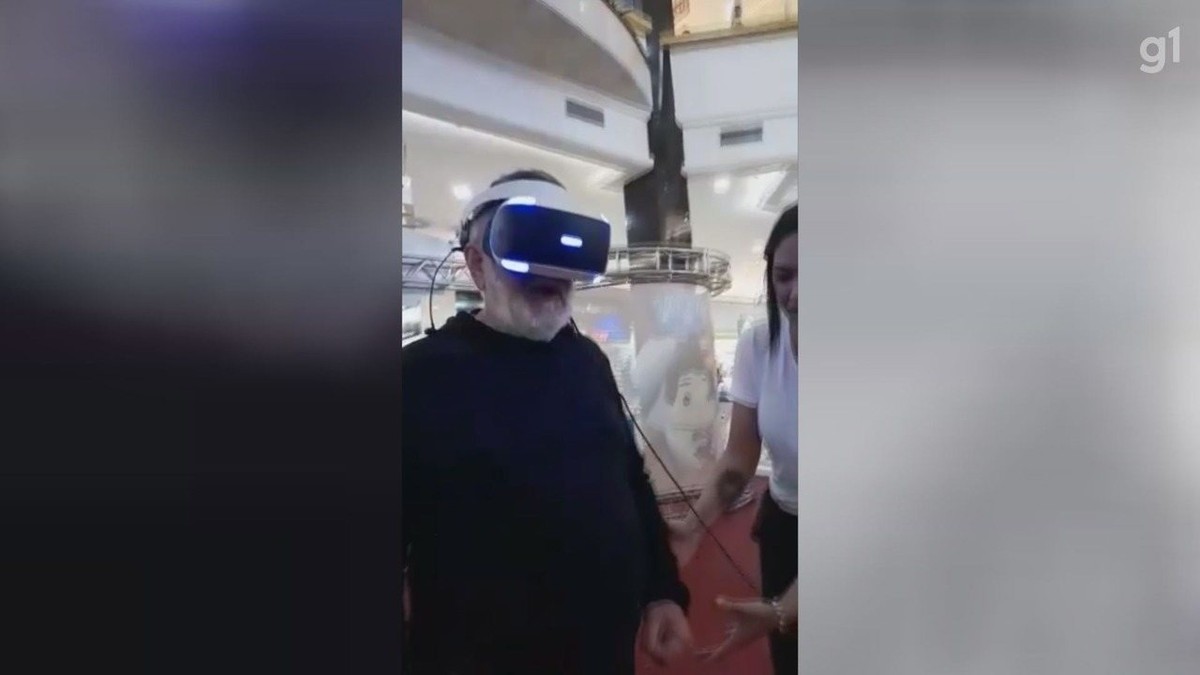 ‘Go, go, no fear’: elderly man gets excited and goes viral when he lands on the simulator screen in SP; VIDEO | Santos and Region

The video of an elderly man jumping and falling on the screen of a virtual reality attraction in a mall in Santos, on the coast of São Paulo, went viral on social media. The company responsible for the equipment reported that no one was hurt and nothing was damaged.

The incident took place at Shopping Praiamar, one of the busiest on the coast of São Paulo, and quickly went viral on social media. “Someone help grandpa I’m dying”, joked comedian Dani Calabresa.

The man, who has not yet been identified, put on VR (virtual reality) glasses and, encouraged by his grandson, jumps off a board located on top of a building, which was created by the technology described above. The outcome of this story is the grandfather and the television on the floor, in addition to a lot of laughter, because no one was hurt.

It all happened last Thursday (14), around 8pm. Draws attention in the video to grandson’s reactionwhich at all times support grandfatherincluding saying: “No fear, you are a paratrooper”. Even before the fall, the child proudly films the ‘virtual reality victim’: “The grandpa with the VR glasses here, ball show”.

The employee even informs the man that he is going to enter an elevator. [virtual] and offers to give him a hand, who refuses to help. As soon as he reaches the end of the board, the grandson starts to cheer: “fall, fall, fall, grandpa, fall” and the old man goes face-first on the game screen. The child despairs, but the grandfather reassures everyone that everything is fine.

Paloma Rodrigues Ferreira, responsible for the VR equipment, reported that “nothing serious happened” and the “family found the situation funny”. “He got excited right away. Instead of taking the step, he jumped.”

In a note, Praiamar Shopping reported that the virtual reality action, proposed in the central square, is the holiday attraction offered in July.

“The client was promptly attended to and had no injuries. The other attractions within the Adventure Park are limited to children aged 5 to 12 years, with the authorization of a responsible adult and accompanied by monitors. The objective of the enterprise is to provide unique moments for the entire family”, he concludes, in a note.

Elderly man falls on his face on the simulated screen in a mall — Photo: Reproduction