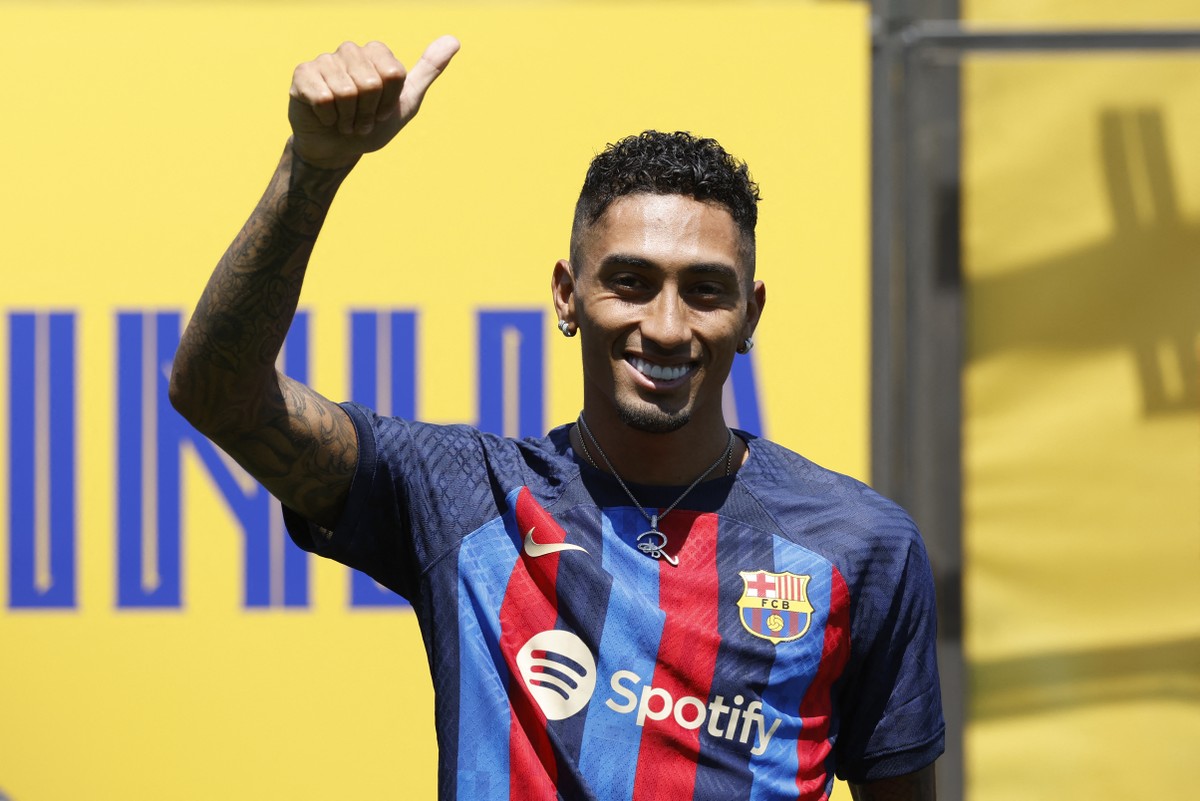 Barcelona made the official presentation of Raphinha this Friday morning, at the club’s training center. The player put on the shirt, appeared on the lawn with President Joan Laporta, did the traditional low-key and spoke to the press.

“It’s an honor for me to be here. I can only thank you for being here and wearing the Barça shirt. I have many idols who played here and made a lot of history. So if I can do half of what they did here, that would be a lot. It’s a child’s dream that I fulfill – said the player of the Brazilian team.

Raphinha is presented as a Barcelona player – Photo: Reuters

Raphinha was signed by Barcelona for €58 million (R$316 million) paid to Leeds United. The player signed a five-year contract, valid until June 2027.

In many moments of Raphinha’s presentation, Barcelona cited the history of Brazilian players at the club, such as Romario, Ronaldo, Rivaldo, Ronaldinho, Daniel Alves and Neymar. The ex-Leeds striker is the 37th Brazilian in the history of the Spanish club. The club representative highlighted the fact.

— It’s very exciting because whenever we live golden moments in the club’s history, there was a Brazilian. Raphinha reminds us of players who created this saga of Brazilians. He follows the legacy. We need to rediscover joy, magic… “Joga Bonito” is back,” said Joan Laporta.

The Brazilian striker’s manager, former Barcelona midfielder Deco, was present at the presentation and stated that the former Leeds player resisted harassment from several clubs. Chelsea even made a bigger proposal, but Raphinha made his desire to play for the Catalan team prevail.

— Raphinha was coveted by big clubs around the world. But he always had the dream of playing for Barcelona, ​​and when the proposal was made official, we were able to fulfill his dream. It was not such a simple negotiation, because the whole world wanted him and he received great proposals, but his childhood desire prevailed and we are very happy with this realization.

little raphinha left Leeds after playing 35 games, scoring 11 goals and providing three assists last season, in which he was the best player of the English team. He was at the club for two years and managed to stand out to the point of reaching the Brazilian national team.

Raphinha, next to the president of Barcelona, ​​Joan Laporta, and his manager, the former player Deco – Photo: Personal archive

Barcelona’s pre-season started on the 4th of July. The team led by coach Xavi Hernández makes its first friendly match of this period this Wednesday, against Unió Esportiva Olot, in Garrotxa, in the Catalonia region.

After that commitment, Barça has a series of friendlies outside Spain, against Inter Miami, Real Madrid, Juventus and New York Red Bulls, all in the United States.

Raphinha performs a swipe at the official presentation at Barcelona – Photo: Reuters