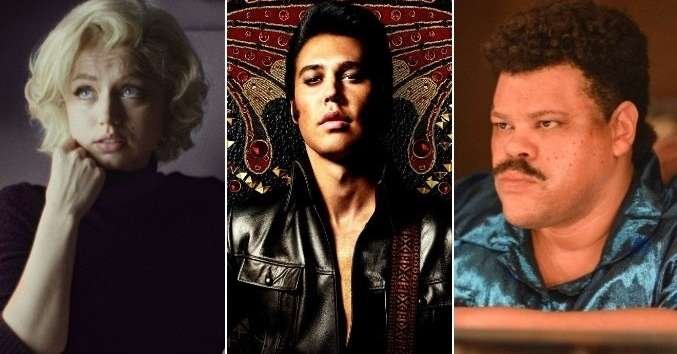 Actors praised for transforming themselves into iconic movie stars

This week, the movie Elvis, which tells the story of one of rock’s biggest stars, premiered. One of the highlights of the super production is Austin Butler, an actor who becomes the music icon in an impressive way. Butler is garnering praise from the critics and the public for being identical to Elvis.

The actor joins a list of artists who have been acclaimed precisely for being able to perfectly capture the essence of great icons such as Marilyn Monroe, Ray Charles, Freddie Mercury, Aretha Franklin and Judy Garland. Some of these actors and actresses have been recognized for their performances, receiving awards at important events such as the Golden Globes, Critics’ Choice Awards and the Oscars.

Remember below interpretations based on great personalities who gave the talk.

The most recent name on the list, Butler has gained attention on social media for having been very similar to the singer, in addition to having managed to replicate the star’s mannerisms and voice in a shocking way. Critics and part of the public on social media already point out that the protagonist of the film Elvis, directed by director Baz Luhrmann, deserves to be nominated for an Oscar 2023.

I can’t express how excited I am about this movie. #Elvis it was absolutely magical. Austin Butler, my God… there was a moment when I thought it was deepfake, because it’s not possible. I wasn’t seeing Austin, I was seeing Elvis! Impeccable performance!
What movie! #ElvisMovie pic.twitter.com/2rgCf07sAl

Another artist who impressed even without the movie she stars being released was Ana de Armas. The actress, famous for productions such as Between Knives and Secrets and 007 — No Time To Die, will play Marilyn Monroe in the biopic Blonde. When the first trailer and first photos of the film were revealed, Ana’s name ended up in the most talked about topics on the web for her resemblance to the icon. The premiere is scheduled for September.

Rami Malek’s performance in the film Bohemian Rhapsody was so praised that it won him numerous awards, including the Academy Award for Best Actor in 2019. The production also won other awards, such as Best Editing, Best Sound Editing and Best Sound Mixing.

Rami Malek is Freddie Mercury himself. It’s not possible, the guy is identical to him

Another actress who was awarded for playing a famous public figure was Renée Zellweger. Her version of the mega star Judy Garland in the movie Judy earned her a BAFTA, a Golden Globe, a SAG and an Oscar for Best Actress in 2020. The similarity between them left netizens gaping at the time of the release of the feature.

what a wonderful performance

I finally watched Judy. The film is great, far from being wonderful, but Renée Zellweger deserved all the awards. The appearance, the way, the voice… Very similar, sos! And the ending… Crying.

It has been a long time since I was ecstatic with the performance of actors and actresses, but Renée Zellweger came with both feet on her chest, like a bomb in “Judy”. What an impressive performance! Literally breathtaking! A very, very well deserved Oscar!

Also awarded for a biopic, Jamie Foxx has amazed film experts and fans alike as he transforms into the iconic Ray Charles. The similarity in look, gestures and even voice was one of the reasons fans were shocked by the transformation for the movie Ray. Jamie won a Golden Globe, a SAG and an Oscar for Best Actor in 2005.

Jamie Foxx turned Ray Charles, even his singing timbre was identical, apart from the grimaces and he played the piano for real.

And how about a duo praised by the same character? Robson Nunes and Babu Santana played the singer Tim Maia at two different moments in his life in the film that bears the star’s name. Both received public and media attention for their performances.

Who is Babu Santana and who is Tim Maia? pic.twitter.com/GxMPIYYgmL

In the final scene of Tim Maia’s film that shows Roberto Carlos underestimating the potential of Tim Maia’s CLASSIC song: “You are something like this, you are everything to me, it’s what I dreamed of, baby…”

I just reviewed Tim Maia’s biopic. Puts, without a doubt one of the best Brazilian biopics. Babu Santana and Robson Nunes perfect as Tim Maia pic.twitter.com/IR7DBW2jg7

The British actor was also highly praised for his portrayal of Elton John in the movie Rocketman. The production won the Academy Award for Best Original Song for (I’m Gonna) Love Me Again, but Taron was left out of the nominations for his performance, which angered many.

Taron Egerton IS JUST LIKE Elton
equal
I’m not just for looks
the mannerisms.. my god was elton himself

me explaining to my friends how amazing rocketman is and about the meaning of the movie and about how much elton has to be loved and the message the movie conveys and taron deserves an oscar for his impeccable performance and that they need to watch / my friends pic.twitter.com/zSbkJW1mDG

In national cinema, Andréia Horta also stood out for her version of the singer Elis Regina, in the film named after the star. Andréia’s mannerisms in her interpretation were praised for being very similar to Elis’s gestures.

Oscar winner for Best Supporting Actress for her performance in Dreamgirls, Jennifer Hudson received new acclaim for her portrayal of legend Aretha Franklin. The actress starred in the movie Respect and, of course, impressed by her voice, in addition to being very similar to the singer.

Can someone give Jennifer Hudson an Oscar, please. She looks amazing as Aretha Franklin in Respect.

Marion Cotillard is a force of nature in Olivier Dahan’s La Vie en Rose. Impressive how the actress transforms into Edith Piaf giving life and feeling to the singer who marked generations. It’s a beautiful portrait, but it shows the internal conflicts of a great woman. pic.twitter.com/MYSGCsUsLj

the film that most impressed me in all these years of Oscars was Piaf. Marion Cotillard is very perfect in this movie. I stay on the floor every time I remember. Oscar more than deserved for her.

Singer and actress Andra Day was nominated for an Oscar for her performance in United States Vs Billie Holiday, a biopic of the great star. She won a Golden Globe for her nuanced performance.

I’m in tears with US vs. Billie Holiday
Andra Day is perfect ❤️

United States vs Billie Holiday is really anything. But Andra Day is wonderful and saves the movie. pic.twitter.com/Wl2M5kulwa