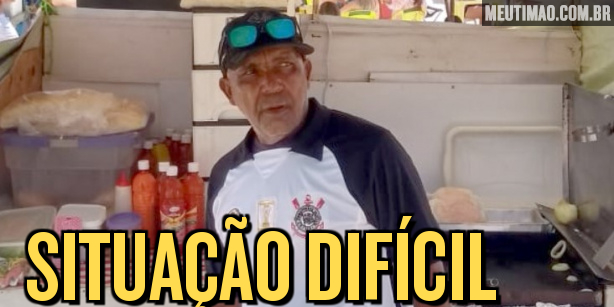 Former Corinthians goalkeeper Carlos César de Oliveira is in an extremely delicate situation and vented asking the club for help. Currently 67 years old, newly operated and living in Alagoas, César had his house hit by floods – something that happened five years ago, when he lost almost all the material possessions of his house in Marechal Deodoro due to the rains.

“I marked my time at Corinthians, in a very good time. After years and years of playing football, I stopped and went to live in Barra de São Miguel (Alagoas). Then I went to live here in Marechal Deodoro. In those 12 years (living in the city), there were three floods and I went through all three. Now it was the worst, it invaded my house, at a difficult time, because I had to undergo a catheterization. I got sick at heart. When I was recovering, these heavy rains came, which broke the dams in the neighboring state, Pernambuco.“, said César, in an interview with UOL Esporte.

In 2017, César turned to former president Andrés Sanchez and Ronaldo Giovanelli, as he had lost practically everything in his house due to the rains that hit the states of Alagoas and Pernambuco. At that time, the former goalkeeper was a seller of snacks on the beach to support himself. Now, five years later, he’s asking for help again.

“The municipalities here in Alagoas were very affected, many people were homeless and I was also affected. I would like very much that Corinthians, friends, could give me a strength. When I passed by Corinthians, I left a very good image at the time of Adilson Monteiro Alves, Orlando Monteiro Alves, Vicente Matheus. It’s a strength for me to have an opportunity to stay alive, to continue in the fight, because I consider myself a warrior guy. People are left without a roof, without a floor, without knowing where to start. I need some strength for me to gain a new life, so I can work with my legs and stop bothering with these things that happen,” he said.

“I have friends, neighbors who meet at schools and shelters waiting for things to calm down so they can go back to their homes. At a time like this, you get desperate, you don’t know how to start over, the entire state, the municipalities are all devastated. I also put myself in these people’s shoes, but I need this strength to get back on my feet. I’m sure someone from Corinthians will appear, especially from the press, who will give this strength to start life over“, he blurted out.

The former goalkeeper wore the Corinthians shirt in 1981 and 1982. There were 56 games, with 26 victories, 20 draws and 12 defeats. The only title won by César was the Feira de Hidalgo Trophy. In addition, he played alongside Socrates, Zenon, Casagrande, Wladimir, Biro-Biro, Zé Maria, among others.