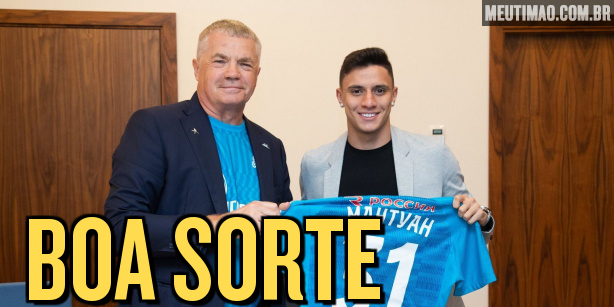 Players Gustavo Mantuan and Ivan were introduced to their new club, Zenit, from Russia. The striker and the goalkeeper agreed to a one-year loan with the Russian club, in a negotiation that involved the arrival of Yuri Alberto to Corinthians.

Although the presentation took place on Tuesday morning, the agreement between the athletes, Corinthians and Zenit had already been concluded a few days ago. The Russian team had already announced the arrival of the two players 20 days ago in a post on their social networks.

Gustavo Mantuan and Ivan were loaned out for a season and with a possible purchase after the end of the loan. The value fixed for the purchase of the striker was 10 million euros, while that of the goalkeeper is four million euros.

Corinthians renewed Mantuan’s contract for another two years, even before the athlete traveled to conclude the negotiation. It is worth remembering that the renewal of the contract was one of the conditions that the striker required to be able to close the negotiation with the Russian team. In addition to this condition, Gustavo Mantuan also requested a contractual clause of immediate return to Brazil in case of need. Russia is still in a state of war against Ukraine.

Ivan has a contract with Timão until the end of 2024 and will now play for one year for Zenit. The goalkeeper arrived at Corinthians earlier this year, to be Cassio’s immediate replacement. The archer did not receive many opportunities and played in only three games this season, two as a team starter.

The athletes’ negotiation involved the arrival of Yuri Alberto to Timão. The athlete lives the expectation of regularizing his documents and having his name published in the BID and thus being released to be able to work for the alvinegra team. Yuri’s debut can already be this Wednesday, against Coritiba, at 21:30, at Neo Química Arena, for the Brazilian Championship.