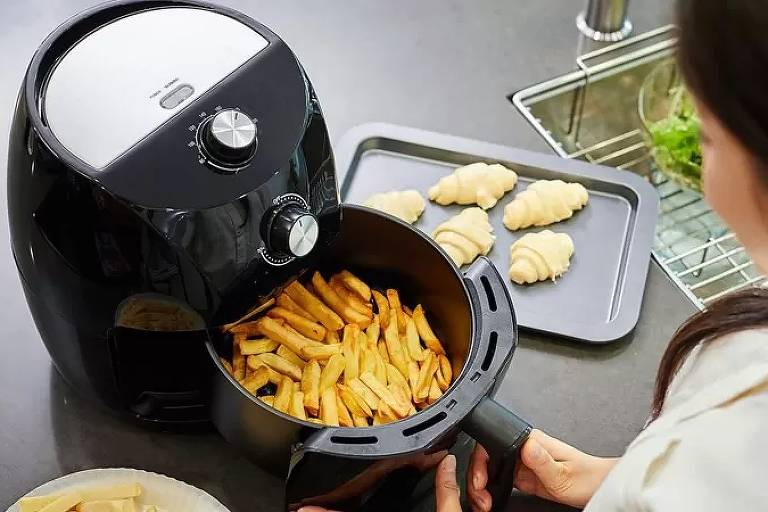 Air fryer: is cooking with an electric fryer healthier and cheaper than with an oven? – 07/20/2022 – Balance

At air fryers were recently touted as the defining product of 2021, with a 400% increase in sales.

But how do they work? And since they use little or no oil, are they a healthier option than other food preparation methods?

At a time when the cost of living is soaring, it is also worth asking yourself how air fryer affects your energy consumption (and your pocketbook).

The answer is yes in both cases. But air fryer has its limitations.

1. The air fryer cooks by circulating hot air around the food

THE air fryer It is similar in size to a bread machine and fits well on the kitchen counter. It circulates very hot air at high speed around the food.

“It’s essentially the same as a fan oven. But it’s smaller, and the fan is usually much, much stronger.”

The force of the air current inside a air fryer resembles a rather sophisticated professional oven that you would find in a professional kitchen.

2. The air fryer cooks faster than a conventional oven – but only in small batches

as the fan of air fryer is more powerful, and its compartment is smaller, the whole device is more efficient, says Jakub.

“If I take a chicken leg, I’ll probably cook it for 20 minutes on the air fryer. In the oven, it would take longer.”

Also, it takes longer to preheat a larger conventional oven.

But like the drawer of the air fryer has less capacity, you can only prepare small amounts.

“If you’re cooking for four or six people, it doesn’t save you time, because you’re going to need several batches in the oven. air fryer“, says the food scientist.

The advertising stars air fryer it’s usually chicken and fries, because the appliance is great for making “anything you want to make crunchy,” says Jakub.

But it can also be healthier than cooking in a conventional oven.

If the potatoes are basted with oil, they will absorb it while they are roasting. With the airfryereverything falls into the perforated basket.

“If there’s any excess fat, it will drain to the bottom, and you won’t eat it.”

There are still healthier ways to cook – you can often, for example, grill or steam the food, without using oil.

But “the advantage of a air fryer is that it usually has functions in addition to the air frying function,” says Anya Gilbert, editor of the BBC’s Good Food magazine, which specializes in equipment and appliance evaluations.

5. There is a wide range of prices and functions between models

The variety of air fryers on the market is vast.

“They’re getting more and more versatile too,” says Anya. “Some of the newer models have around 15 functions.”

Recently, the BBC’s Good Food magazine published a list of the 14 best air fryers of 2022, rating the models according to a number of categories.

“The Cosori brand has done very well,” she says. “The Ninja Foodi MAX Health Grill & Air Fryer was a highly rated model too.”

To reach this conclusion, Simon Hoban, producer of the BBC’s Sliced ​​Bread program, made chicken thighs and potatoes – one portion in the oven, the other in the oven. air fryer (taking care to ensure that other appliances were turned off at the time of preparation).

Then he checked the electricity meter to see how much energy had been used.

The program team compared the air fryer to an electric oven for comparison.

The potato (with the skin) took, in turn, about an hour to properly bake in the oven – the equivalent of 1.31 kilowatt-hours.

The conclusion? “Cooking in air fryer uses less than half the energy needed in the oven,” says Greg. “So cooking in the oven costs more than twice as much as cooking in a air fryer.”

7. An air fryer never fully replaces an oven – but it’s a ‘great invention’

Jakub does not believe that a air fryer can completely replace an oven. “Obviously you can’t roast a whole chicken in one air fryer“, he says, or at least not a turkey!

“But I think it’s a great invention. I have one, I use it a lot. I think it’s great for someone who doesn’t have an oven.”

Anya agrees: “I think the air fryers they are a really exciting tool… They can be a smart investment when it comes to kitchen storage and cooking time. So yes, I’m a fan.”

Previous Flamengo enters the STJD against the draw of the Copa do Brasil and wants to send the second game of the quarterfinals at home
Next Before Kissing Natalie Portman, Chris Hemsworth Didn’t Eat Meat Because The Actress Is Vegan