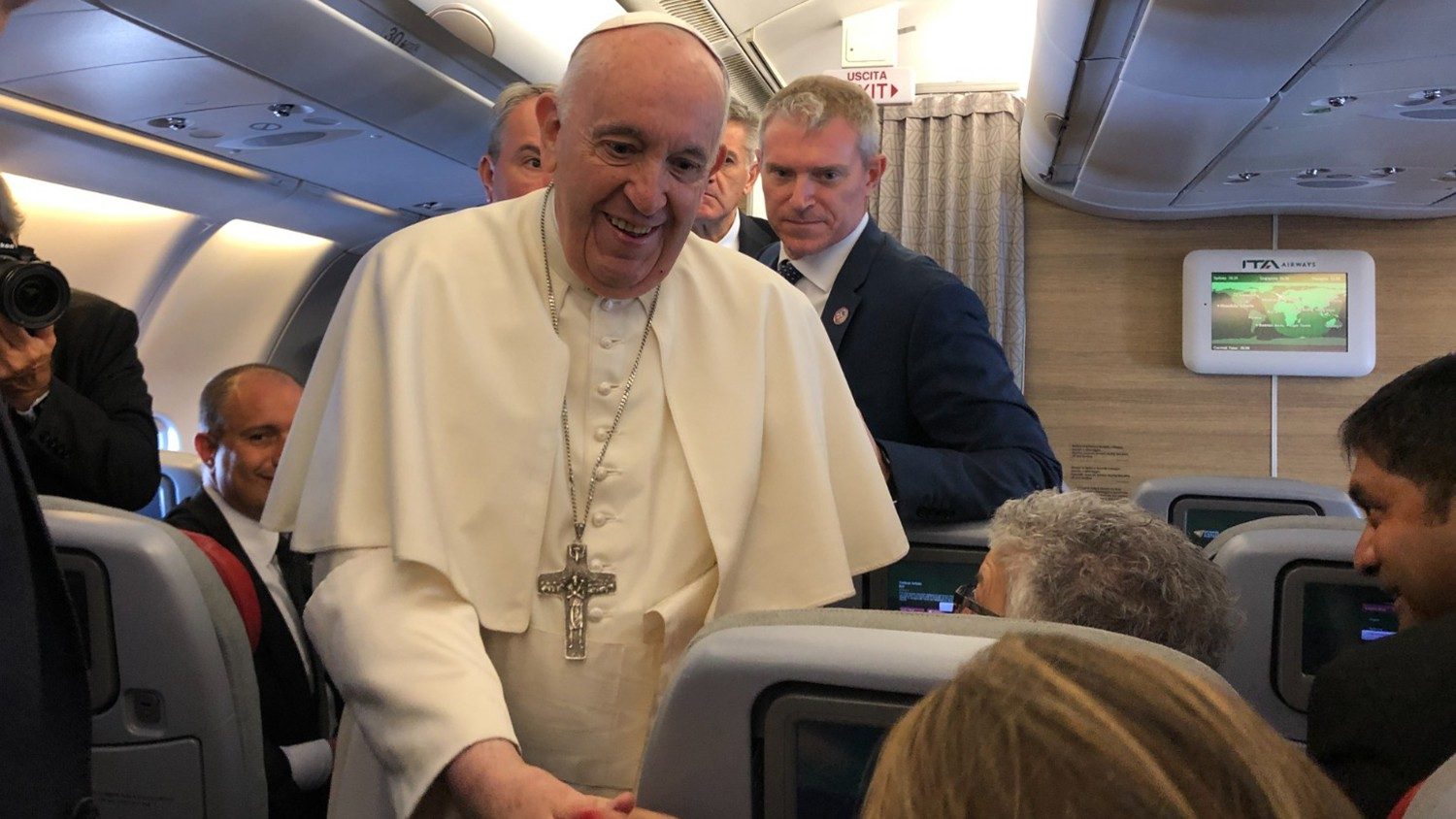 Remembering grandparents in a special way, was the Pope’s request to journalists

On this World Grandparents Day, the Pope asked journalists on the flight that takes him to Canada to remember their grandparents in a special way. Furthermore, he asked that the elderly men and women religious, the grandparents of the consecrated life, should not be hidden, as “they are the wisdom of a religious family”. “May the new men and women religious, the novices, the novices have contact with them: they will give us all the experience of life that will help us to move forward.”

As he usually does at the beginning of his Apostolic Journeys, the Pope greeted the approximately eighty journalists from more than 10 countries aboard the flight that takes him to Canada. In particular, he recalled World Grandparents Day and addressed the Mexican journalist Valentina Alazraki, who has been following the papal flights since 1979, and who was absent on the last trips.

“Happy Sunday everyone, welcome; thank you for this service and also for the company: I live it as a company… Thank you for your work. I would like to greet you, as always: I think I will be able to move, we can go” , said Francis shortly after the introduction made by the director of the Holy See Press Office, Matteo Bruni, adding: “Let us be attentive in this journey: how [Matteo] said, it’s a penitential journey, let’s do it in this spirit. I also salute the dean [a jornalista Valentina Alazraki]: she’s back, after some travels away. She’s in the back. Good sunday”.

The Pope then asked that everyone remember today in a special way their grandparents and grandparents, living or deceased, because “from them we receive so many things, above all history”:

I would like that today… there is no Angelus, but we are going to do the Angelus here… It’s Grandparents’ Day: the grandparents, the grandparents, who are the ones who passed on the history, traditions, customs and so many things, no? Today it is necessary to go back to their grandparents – I will say this as a leitmotiv – in the sense that young people must have contact with their grandparents, take them from them, go back to their roots, not to stay there, no, but to take them forward, like the tree that draws strength from the roots and carries it forward in the flowers in the fruits. I always remember that poem by [Francisco Luis] Bernárdez: everything that the tree has as a flower comes from what it has buried, which are its grandparents. And I would also like to remember, as a religious, the elderly men and women religious, the grandparents of the consecrated life: please do not hide them, they are the wisdom of a religious family; and that the new men and women religious, the novices, the novices have contact with them: they will give us all the experience of life that will help us a lot to move forward… they are gone, others are alive, but let us remember them today in a special way: we received so many things from them, first of all history. Thanks.