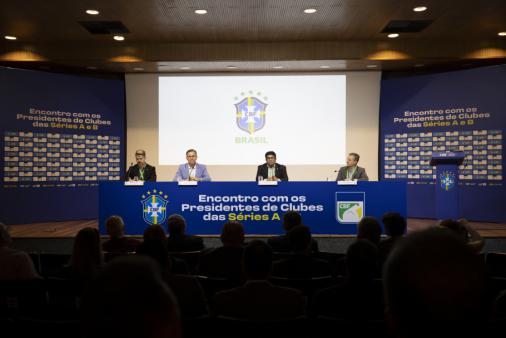 CBF announces a series of measures to minimize refereeing errors

The CBF announced this Tuesday afternoon (26), in a meeting with directors of the main clubs in the country to address refereeing complaints, a series of measures aimed at reducing whistleblower interference in games.

GALLERY
+ See the chances of title, classification to Libertadores and relegation at the end of the 1st round of the Brasileirão

Chairman of the Arbitration Commission, Wilson Seneme stated that the idea of ​​bringing together the presidents of the A and B series clubs was already in his plans since the beginning of the work, which began two days before the beginning of the Brasileirão Assaí. With the end of the first round, the opportunity was created to hold this meeting.

– The objective of this meeting is collective development, we are looking for elements of analysis so that we can grow. To not be a repetitive work of what has already failed, to be different – said Seneme.

The former arbitrator also made important announcements for the future of Brazilian arbitration. For the first time, an in-person interseason will be held with 95 referees from all over Brazil, between August 1st and 5th, in Rio de Janeiro. In addition, referees will have at their disposal 840 profiles on a video and statistics platform to watch the bids of the games in which they play, analyzing successes, reviewing errors and receiving online, more quickly, the evaluation of the instructors.

The Refereeing Commission also announced that it will create the VAR-CBF framework, with 128 approved referees and will hold monthly in-person practical training sessions, starting in August. Groups will be taken to the Brazilian Arbitration Center of Excellence, in Rio de Janeiro, for constant improvement.

Other measures announced by Seneme were: the holding of the annual pre-season for the CBF refereeing; the establishment of the Arbitration Performance Assistance Program (PADA), with integrated multidisciplinary assistance; the publication of audio and video of the main checks and reviews within 24h after the match in Serie A and 48h in Serie B; the availability of the virtual offside line live for TV broadcasts, which has already been carried out in the last rounds; and the provision of VAR simulators for online distance training and weekly face-to-face training.

– I’m sure we have the ability to improve Brazilian refereeing. I have no doubts about that. If clubs have a little understanding and support us, it will make development a lot easier. And you will benefit in the end. I see quality in the referees. We need to get closer to them, monitor them, so that they improve their performance – completed Seneme.

TABLE
> Check classification, games and simulate results of the Brasileirão-22
> Check out all the matches of the Copa do Brasil-22
> Meet the new LANCE results app!

Previous Top 10 Movies About Singing, According to Ranker » Movie News, Movie Reviews, Movie Trailers, TV News.
Next James Webb is on a collision course with debris from Comet Haley

On vacation in the United States, the winger will travel to Greece to sign a …