Chairs removed from work at Pacaembu stadium are sold for up to R$ 1,800 at a store in SP | Sao Paulo

About a year after the beginning of the renovation works of the traditional Pacaembu, the chairs removed from the stadium were offered for sale by a furniture and decoration store in the city of São Paulo for almost R$ 1,800 a unit. There are also models from R$ 1,499.

The seats were removed from the stadium by Allegra Pacaembu, who won the right to operate the stadium for 35 years. Under the concession contract, the company must invest around R$ 400 million in improving the stadium.

The concessionaire says that the sale of the chairs is a “socio-environmental initiative, with the objective of praising the history of football in the most emblematic stadium in the city of São Paulo” and that “there is no legal or contractual restriction to the initiative” in the agreement signed with the Municipality of SP for space exploration.

“The reuse of chairs avoided their disposal, giving them a new purpose. (…) The profit from the sale will be reverted to the ‘Gol de Letra Foundation’ – a non-profit civil society organization that has been developing since 1998 , projects to contribute to the education of children and young people from socially vulnerable communities”, informed Allegra Pacaembu.

Advertisement of the chairs removed from the Pacaembu stadium at the Tok&Stock store, in São Paulo. — Photo: Reproduction

The NGO Gol de Letra is managed by former soccer players Raí and Leonardo, four-time world champions with the Brazilian team in 1994.

According to the Tok&Stock store, the limited edition of the chairs maintains the original colors and marks of the items removed from the stadium during the renovation.

Pacaembu chair for sale in a furniture store in São Paulo. — Photo: Reproduction

The store also stated, through a note, that “reusing the chairs, avoiding their disposal and giving them a new purpose, so connected to the emotions of the fans, is a great way to honor the legacy” of Pacaembu.

“Football is a national symbol and stadiums like Pacaembu carry decades of history, often being part of affective memories and important events in people’s lives. Tok&Stok’s main objective with the Pacaembu Chair line is to celebrate this history with fans – taking a little piece of the stadium to their homes. (…) We believe that reusing the chairs, avoiding their disposal and giving them a new purpose, so connected to the fans’ emotions, is a great way to honor their legacy”, said the company.

O g1 contacted the São Paulo City Hall to find out if the concession contract really authorizes the commercialization of the material, but received no response until the last update of this article.

The renovation work on Pacaembu began on June 29, 2021, when the demolition of the south stand, known as Tobogã, began.

Since then, the revitalization of the stadium with the facade listed by the public heritage of São Paulo has faced several controversies on social networks.

In addition to having the lawn covered with asphalt at the beginning of the year, the Allegra Pacaembu Consortium asked the São Paulo City Hall in January to reduce the grant amount to be paid for the space by 71%, in addition to extending the concession period of 35 for 50 years.

The justification was that the consortium needed to compensate for losses caused by the pandemic. 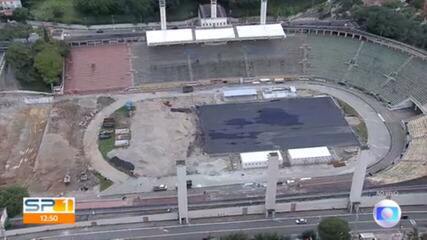 Pacaembu lawn is covered by asphalt

In addition, the concessionaire also requested the inclusion of the possibility of commercial exploitation of Praça Charles Miller, which is in front of the facade of the stadium, in the West Zone of the capital of São Paulo. The location is not covered in the current contract.

The request for contractual review became the target of the Court of Auditors of the Municipality of SP (TCM-SP), which opened an investigation to investigate possible “damage to the treasury”. 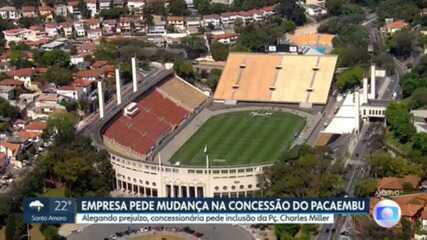 Counselor Domingos Dissei, from TCM-SP, wants to know what were the requests contained in the request for economic and financial rebalancing proposed by the Allegra Pacaembu Concessionaire, what stage is the analysis of the request for economic and financial rebalancing, with the manifestations of Organs competent bodies , and whether the actions provided for in the list of Concession Plans, divided into Works and Operations, have been effectively carried out within the deadlines.

In addition, the court wants to understand whether the concessionaire has made the investments to modernize the equipment, infrastructure and facilities of the Pacaembu Complex, including items related to accessibility, signaling and visual communication, electrical, hydraulic, telecommunications, IT systems. and air conditioning.

Other information requested by the TCM is whether the necessary licenses to carry out the works and reforms to comply with the intervention program have already been requested and issued.

Finally, the TCM requests that all requests for economic and financial rebalancing that may be submitted be preceded by an analysis by the Auditors of the Sub-Secretariat for Control and Inspection of the TCM, in order to avoid the risk of possible damage to the treasury.

Allegra Pacaembu announced, in November 2021, that it had completed the demolition of the south stand, known as the tobogã, and that it entered into a partnership with a hotel chain to occupy two floors of the future building on the site.

The demolition became controversial in January 2020, shortly after the concessionaire took over the management of the complex and announced that it would build a commercial building in place of the grandstand.

Tobogã do Pacaembu is demolished and concessionaire announces hotel in the stadium — Photo: Vivian Reis/g1 SP

The residents’ association Viva Pacaembu had appealed to the courts in an attempt to prevent the work, but the request was denied because the grandstand is not part of the original structure of the stadium and, contrary to what the regulars believed, it is not part of the historic heritage.

According to Allegra Pacaembu, two floors of the venue will have accommodations by Universal Music Hotels, the new hotel chain that is an arm of the label of the same name. The partnership agreement is for 20 years and the expectation of those involved is to transform the complex into a destination in the city of São Paulo, with accommodation, but also with sporting, musical, audiovisual events, an art gallery, production studios and restaurants. .

Photo of the Pacaembu project after the concession to the private sector — Photo: Reproduction/Prefeitura SP

Located in the West Zone of São Paulo, the Pacaembu complex is owned by the City of São Paulo, but was granted for management and commercial exploitation by the private sector in 2019 for a period of 35 years, after the Municipal Court of Auditors (TCM) blocked several attempts.

The prefecture’s justification for the concession is that the stadium harms the public coffers. In 2017, the stadium’s revenue was BRL 2.4 million, while maintenance expenses were BRL 8.3 million, according to municipal management. On the other hand, those who visit the place show fear that Pacaembu will become a place with more restricted access after the concession.

In January 2020, Allegra took over the complex, which includes the Paulo Machado de Carvalho municipal stadium and a sports gym. Charles Miller Square and the Football Museum were left out of the concession.

The concessionaire informed that the expectation is that the Pacaembu will become a public facility for daily use after a renovation worth R$ 400 million, with a duration of 28 months.

Projection of how the Pacaembu Complex will look after the renovation — Photo: Disclosure

The work began in June with the demolition of the toboggan. Allegra intends to build a building with five floors and four basements. The renovation of the multi-sports club will be a restoration work, without significant interventions, and with maintenance of the side stands (east and west).

The convention center and a parking lot must be located in the basement; on the two main floors, the hotel, and, on the ground floor and on the terrace, restaurants and cafes.

The building will also have an arena dedicated to eSports, specialized in Battle Royale, a genre of electronic games in which up to 100 people can play simultaneously, with a place for 2,000 people seated.

VIDEOS: See more about SP and the metropolitan region