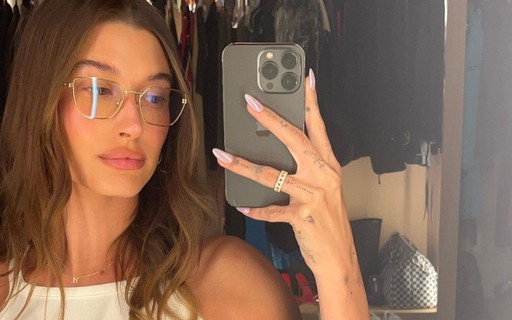 Fans in the beauty universe have already noticed: Hailey Bieber’s nails are only talked about. After popularizing her naturally lit skin – which has even become a trademark of her new skincare line, Rhode Beauty – the model is making a splash with nail art with a similar aesthetic and full of shimmer.

The style, called “Glazed donut nails”, which can be translated into Portuguese as “donuts topping nails”, is named after the similarity of the illuminated icing of the candy, which gives a pearly and shiny effect to the nails. Nail art was the model’s go-to during the 2022 Met Gala and since then Hailey has been wearing the style frequently.

On TikTok alone the hashtag #haileybiebernails has more than 80 million views and just type “Glazed donut nails” in search to find hundreds of tutorial videos teaching how to reproduce Hailey’s nails. Even celebrities like Vanessa Hudgens and Sydney Sweeney have already joined the style.

“These sparkling nails are usually done in the salon, but it is possible to adapt the technique to obtain the same effect at home, both in stretching and in natural nails, and it is very easy to do”, explains Juliana Vieira, nail artist for celebrities such as Sasha. , Sabrina Sato and Thassia Naves.

How to do Hailey Bieber’s nails

Juliana explains that, to reproduce Glazed Donut Nails, you will need a clear nude or white translucent gel polish, a top coat and chrome nail powder in a pearly white tone. The latter can be easily purchased over the internet.

“Apply a coat of nude or white translucent gel polish and wait for it to dry. Then apply the chrome powder by rubbing the applicator that comes with the chrome powder over the nail surface until it is completely covered. Wipe off any excess nail polish. enamel on the sides and apply a transparent top coat”, taught the professional.

In addition to the chrome powder technique, it is possible to achieve the similar pearlescent effect with a combination of nail polishes. In a tutorial posted on Instagram, Los Angeles manicurist Zola Ganzoright taught the product-free version.