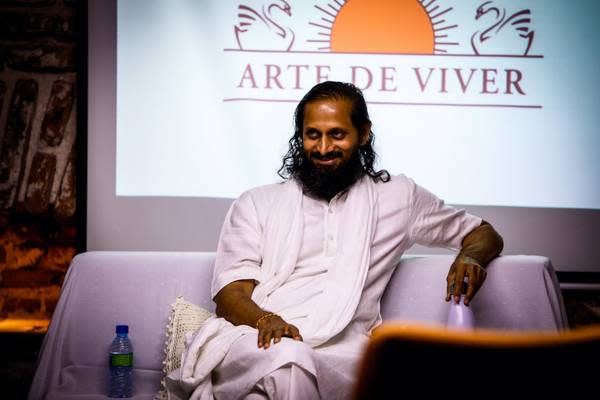 ‘He asked me not to tell anyone’, says victim of spiritual mentor

Two of the victims who reported having suffered sexual harassment and harassment by the former Indian mentor of the NGO Arte de Viver na América Latina, known as Swami Paramtej, told GLOBO, in anonymity, how the alleged crimes took place. According to the devotee who was a victim in São Paulo, in 2017, the suspect, real name Pankaj Gupta, put his hand on parts of my body and “related the act to a lesson on fever”. He also asked her not to tell anyone what had happened. The police opened a secret investigation into the case.

Sex crime: Brazilian is sentenced to 22 years in prison in the UK accused of doping heterosexual men to rape them

In hospitals: every two days, a woman reported sexual abuse inside a health unit in Brazil

C., who will not be identified in the report for safety reasons, says that the swami’s “unacceptable” attitude happened on the eve of a meditation class, when she was in charge, at the time, of preparing the dhoti (typical dress) of the religious leader and serve him tea—practices, according to her, common among ADV volunteers. Staying in the same house, she says that he invited her to watch a movie and, upon reaching the room, she was invited to sit next to him on the bed, when, according to the follower, she had her body touched. According to C., the Swami related the act to a “lesson about fever” – a state of being feverish, but which in this case would have the connotation of human impetus – and said that “it was not a lewd act, but a teaching”.

Girl drama: Bolsonaro criticizes abortion in 11-year-old child and says he asked for investigation of the case

“It was inappropriate and unacceptable”

— The day before the course, after the host person had gone to sleep, I received a message from Swami. He invited me to his room to watch a movie. I remember that when I opened the bedroom door I looked at the bed where he was sitting with his notebook open, I thought “where am I going to stay?”. The room where he slept was clean, taken care of, it was like a temple. He beckoned me to sit on the bed next to him which was a shock, I swear I thought I would stay on the floor. This closeness to a Swami is something unimaginable. And it was on that occasion, something happened that I now see as inappropriate and inadmissible. There was no sexual intercourse, but he put his hand on parts of my body. Then he asked me not to tell anyone about it — details the victim, who filed the complaint in April.

Swami is a title given to disciples who live in celibacy to spread knowledge and “the master’s grace”. He was one of the trusted men of Indian guru Ravi Shankar, a reference in India, founder of the entity that is present in 156 countries. Shankar has not been reported for misconduct. Wanted, Paramtej said he was expelled from the organization and that the action has caused “a lot of suffering in everyone”. He declined to comment on the allegations.

Questions about sexual desire during counseling

— I felt very special, I was close to one of the little soldiers who was in turn very close to Ravi. Ravi to me was the god on Earth. After that, I continued volunteering in his presence for another two years, as if nothing had happened. I gradually moved away from ADV,” says C.

C. says that she even had a meeting with Ravi Shankar because he would be listening to the victims, but says she was disappointed to hear from him that she should not take the complaint forward so that Paramtej would not attempt to take his own life. Sought, the ADV denied the allegation.

— At this meeting, some tried to humanize the Swami, attributing his error to his human character. Before that, however, they explained his celibate vow to us as an event, not a choice. Today, all this sounds very contradictory to me. If he is a human like any other, capable of committing the abuses he did, why were devotees convinced that he was special? If he is so wise why would he commit suicide? – asks the victim.

Uruguayan K., 32, also claims to have been a victim of Swami Paramtej in 2012, when he was in her country for yoga and meditation meetings. One night, around 1 am, the priest asked her to give him a massage. Although she found it strange, she says she was flattered to serve a master who presented her with the knowledge to obtain “positive karma”. At the time, he tried to put a sexually explicit movie on TV, having been prevented by her.

— I knocked on the door before entering the room and when I entered I was sitting cross-legged on the floor with the computer. I asked him where he wanted massages, and he told me that on his shoulders. I got down on my knees behind him and started massaging his shoulders while he was at the computer. At that moment I see that he goes to youtube and searches for sex scenes from the movie we saw earlier. I froze, vividly remembering the sensation that ran down my spine. Then he asked me if he should hit enter. And I immediately said no, said good night and quickly went to my room,” says K.

After years of incomprehension about what had happened to her, it was only in March that she sent the report to the management of the NGO, after having discovered through therapy that she had suffered sexual violence.

“The only time I started to realize how serious it was that someone with spiritual power and hierarchy could do something like this to me was when I started therapy three months ago. Especially since after that episode, Swami stayed at my house a thousand times over the course of 10 years, I cooked for him and took care of him all that time. He acted as if nothing had happened and so did I – says the victim.

“Workshops against patriarchy”: NGO defends itself

Childhood threatened: every hour, two children between the ages of 10 and 14 are raped in Brazil

The power of information: children report abuse after a lecture on sex education at a school in SC

Both victims said they took the complaints to the ADV. Sought, the NGO reported that the activities of the Ethics Department, created in April to investigate cases, are carried out under secrecy, except for those referring to “promoting workshops to raise awareness of the volunteer corps of urgent human rights issues, such as gender issues, racism, patriarchy, among others”.

Last Thursday, the international coordinator in Latin America of Arte de Viver, Beatriz Goyoaga, stated that the NGO received only four complaints in all of Latin America and that there was no criminal complaint. According to her, the suspect was removed and they no longer have any kind of ties with the institution. She also informed that they provide psychological support and support to those “affected” and that, so far, there has been no expression of will on the part of the complainant to take the respective cases to the police and judicial spheres.

“The complaints are about inappropriate behavior,” said the coordinator.