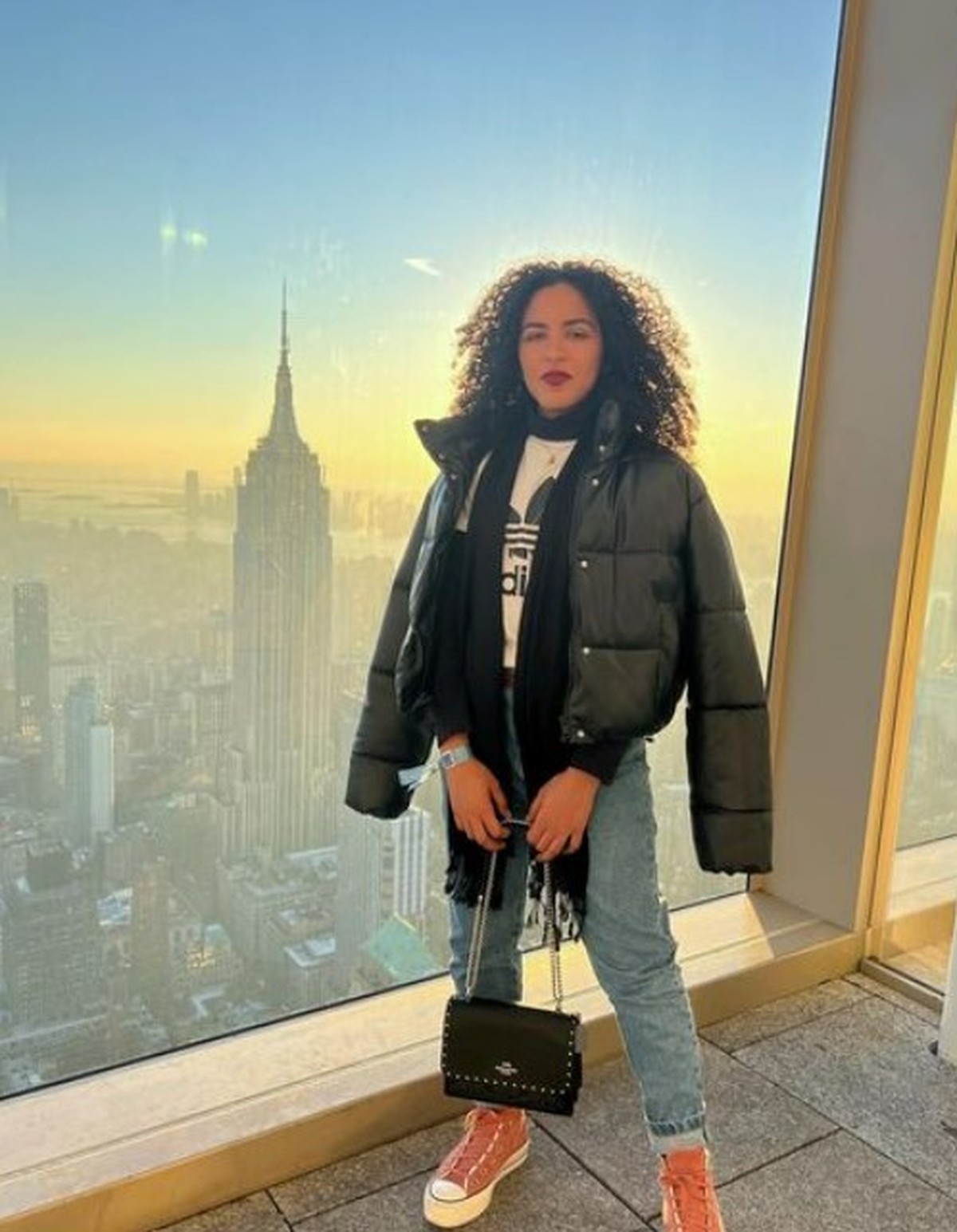 ‘Money doesn’t buy happiness, but…’ Brazilians leave the country in crisis in search of work and quality of life | Economy

The student is part of a contingent of Brazilians who have left a Brazil in crisis in search of work and a better quality of life abroad.

Inaê França grew up in the suburbs of Recife and her trajectory was marked by scarcity; in the USA found remuneration that he considers fairer — Photo: Personal Archive

Data from the Federal Revenue indicate that this year the migratory flow from Brazil abroad has grown again, after two years of a pandemic, which saw a significant decline in these numbers. Between January 1st and July 12th of this year, around 14,000 Brazilians sent the Declaration of Definitive Departure from the Country (DSDP) to the agency – almost 90% of the total registered throughout last year.

Many, like Inaê, Júnior and Lívia, heard by the report of g1, they found less qualified jobs abroad, but which guarantee a level of consumption and quality of life above what they had in Brazil. And with a bonus: more security.

‘I can buy what I want to eat’

“In Brazil I would go to the market and buy what I could buy. Today, I can buy what I want to eat”, says Júnior Marques, 31, who currently lives in Portugal.

While in Brazil unemployment is around 10%, in Portugal, says Júnior, “there is no shortage of jobs for those who want to work”.

Even with a steady job, partnership in a valet company, car paid off and a house of his own in Niterói, Rio de Janeiro — Marques decided to leave Brazil in search of new opportunities in Portugal.

In the country since February, he currently lives alone in a small rented room and works in the construction industry – something he never imagined, since he worked as an app driver in Brazil. Today, he works 8 hours a day and earns the equivalent of around R$5 thousand per month.

“Today I work less and earn more, soon I will be able to buy my own apartment, which would take me years in Brazil”.

Gabriela Marques, 28, his wife, had already left Brazil months before, to work as a maid for seven months on a ship in Europe – and they now see each other when the vessel makes stops in nearby cities.

But the opportunities there did not come without setbacks. The Brazilian, who reports never having suffered racism here, has already seen himself as a victim in the small land, where, according to him, this type of discrimination is common.

“A Portuguese man who was on his cell phone got up as soon as I arrived and looked at me with a disgusted face. I was clean, I didn’t smell, there was no reason for him to look at me that way”.

According to a report by the Commission for Equality and against Racial Discrimination (CICDR), the expression that stands out the most as a basis for the origin of discrimination in that country is “Brazilian nationality”, followed by the expression “black/black skin color” /black/black race”, category that includes all references to “black”.

‘We boarded with 8 suitcases, with clothes and some toys’

“We wanted to have a different experience, an experience of living abroad, and getting to know the quality of life in a first-world country,” said Luiz Ricardo Gerbelli, who moved with his family to Canada.

It was the pandemic that postponed, by more than a year, the plan of the couple Luiz Ricardo and Carolina, both 40 years old, to move with their children to the northernmost country of the continent. The move took place in August 2021 and the family has since lived in London, a small town in the province of Ontario.

To make the dream come true, Luiz resigned from his job, and the couple sold almost everything they had.

“The 4 of us boarded with 8 suitcases, with clothes and some toys, and that was it. We need to leave collections, fads, books, lots of clothes, household items and put what we were going to use in our suitcases. In the end, we realize that we don’t even need half of what we brought. It is a great exercise in detachment and in practice we see that it works”, said Carolina.

In Brazil, Carol worked as a florist and had her own company. She moved in on a student visa and a month later joined a horticulture course. Luiz, on the other hand, got a job in the IT segment, the same area in which he worked in Brazil. “It was not easy [conseguir trabalho na mesma área]but it worked”, he celebrates.

Luiz, however, had to ‘take a step back’ in his career, including in terms of remuneration, which ended up being below what he received in Brazil. “If in Brazil you were a manager, here you will be a programmer. Canadians need to gain trust in you first before offering you a higher position,” Luiz clarified.

There were challenges in adapting for the children, who did not speak English, and in dealing with the weather – in the Canadian winter the temperature can reach -30ºC.

But, from the quality of life in a 1st world country, the couple highlights safety. “My son was desperate because the door only has one lock. He was afraid for a few months that someone was going to enter the house. We didn’t realize that violence in Brazil affected a child as much as it had been affecting our children”, he said. Carol.

Journalism student Inaê França de Araújo, 23, arrived in Orlando, United States, at the end of 2021, for a three-month exchange program. After this deadline, she decided to be motivated by the remuneration of the work.

“For those who have been through so much trouble in life, being here is an opportunity to take other flights”, he said.

Inaê grew up in the suburbs of Recife, the capital of Pernambuco, in a very poor area. She considers that she has contradicted the local statistics – her childhood friends “have either been arrested, or the most they dream of achieving is working in the corner market”, she says.

“My mother was paid less than minimum wage, but she managed to pay all the bills and still saved a few bucks. If I asked her for a hazelnut cream, she planned to buy it for three months, but I got my hazelnut cream.”

After a stay in São Paulo, where she studied journalism while living in a hostel and giving private English lessons, Inaê returned to Recife to do an internship at a private bank. With the termination of her job in São Paulo, she hired the exchange program that provided, in addition to studying the English language, for paid work.

“I decided to stay [depois de concluído os três meses de intercâmbio] because with the minimum wage in Brazil, the hour of work is worth R$ 6, while here (in Orlando) it is worth US$ 15”, he said.

Meanwhile, in São Paulo, despite evaluating that she had “a good life”, the young woman had, for a year, a single pair of shoes with holes and a single warm outfit, which were donated to her.

Currently, Inaê works as a receptionist at a hotel. And the hazelnut cream, which Inaê’s mother had to save up for three months in her childhood to buy, the young woman can now purchase with peace of mind.

The salary in the United States also allowed him other ‘luxuries’, such as buying a smartphone that in Brazil sells in the range of R$10,000; and good deeds, like sending money so the grandmother could restore the roofless house during a storm.

“For my new life, I lost sight of my dad thrilled with my graduation, I missed my younger sister growing up, I stopped being with my dog ​​at her death, I stopped hugging my best friend when she was humiliated by mother for having a girlfriend, I missed my mother’s warm hug in my depressive attacks”, he enumerated.

But the losses were offset by great gains. “I gained a great quality of life, which I deserve after so much struggle, I gained opportunities to provide great things for my family, I gained another adventure and I think that’s what makes life worth living”.

‘Everything is very expensive, but you have purchasing power’

Lívia left her job as a cake designer in São Paulo to study English in Ireland — Photo: Personal Archive

Lívia would leave on a flight to Ireland on April 1, 2020 – but she was only able to board two years later, time that allowed her to increase her financial reserve. It was providential: after all, Dublin, the city she chose to study English, is one of the European cities with the highest cost of living.

“This has always been my dream, to learn English to earn more money, have more things and help my family,” he said.

Even without mastering the language, Lívia quickly found work. She was called to work in the company of a Brazilian as a ‘cleaner’, an English term used to designate people who do cleaning services. Unlike Brazil, those who do cleaning in Europe are paid well.

“In Dublin everything is very expensive, but you have purchasing power. It’s different, because here you win in euros”, he highlighted.

From her first impressions of Ireland, Lívia highlighted having been impacted by the cultural shock. “The Irishman’s formality is impressive. I went for a 10 year old’s birthday and found it surprising how even children act very formally,” she said.

When asked about what she left behind when she left Brazil, Lívia talked about her job as a cake designer. “I had only arrived here for a month and I found myself missing my job very much. I love what I do,” she told her.

Where do Brazilians go?

From 2011 to 2018, the number of people who declared their final departure from the country to the IRS grew year after year – until a record high in 2018, when there were 23,800, almost three times the number in 2011. After a 2019 of stability, this number plummeted during the pandemic, when movement between countries was restricted.

The Ministry of Foreign Affairs says it does not have an updated balance of the number of Brazilians living in other countries. The most recent data made available by the ministry are from 2020, when the Brazilian community abroad was estimated at 4.2 million – the largest contingent registered, at least, since 2009.

The Itamaraty data also show that almost half (46%) of Brazilian emigrants are in North America. Another 30% are spread across Europe. The smallest proportions of the Brazilian community abroad are in the Middle East (1.33%) and Africa (0.23%).

Also according to the Itamaraty survey, the United States leads the ranking of the ten countries that most concentrate emigrants from Brazil. Europe has six countries on this list, with Paraguay as the only representative of South America.