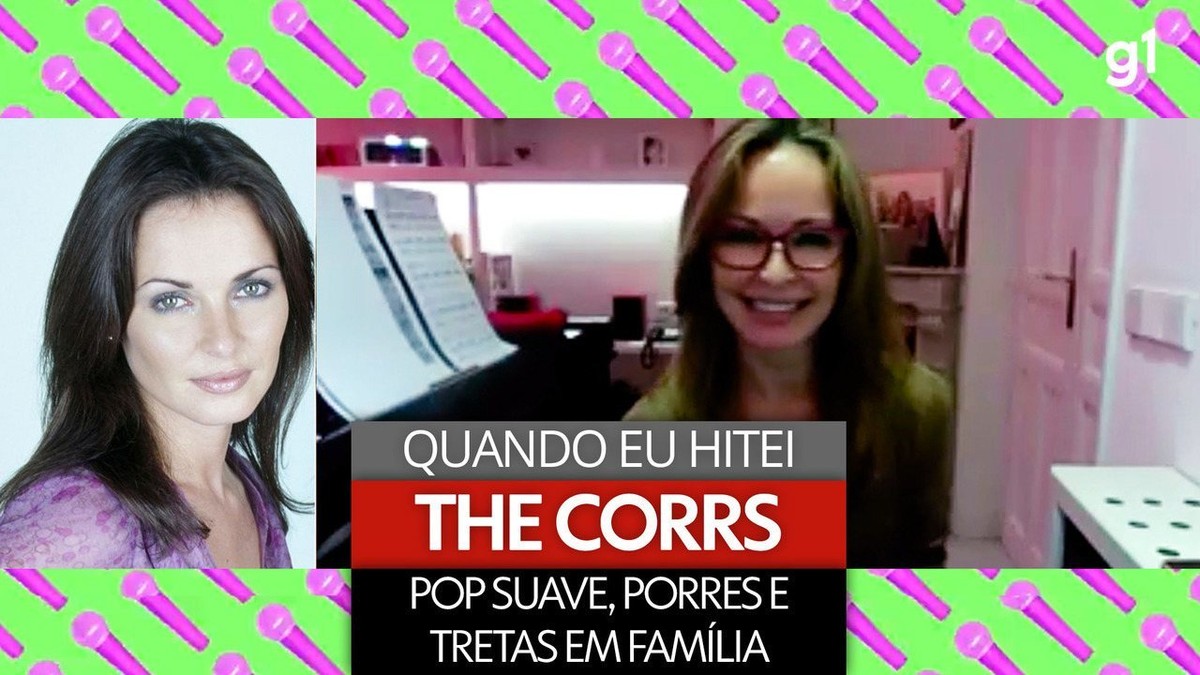 The Corrs sold 40 million records with behaved pop, but had drunkenness and ‘fights’ | Song

Andrea, Caroline, Jim and Sharon share the same passion for pop music and traditional Irish music. They also share a surname, Corr, which baptizes the group for soft pop with violin and sweet vocals.

In the early 2000s, Corrs was very successful. Adding up the seven studio albums, the four brothers sold over 40 million records. Even being a family band, that didn’t stop them from taking a break in 2017, the year of their last album, “Jupiter Calling”.

“Most families tend to get together at Christmas, at baptisms. We were together all the time… You put a family on the road 24 hours a day, 15 years straight. This is an interesting journey”, adds the violinist. and singer Sharon Corr to g1 (see interview in the video above).

“Sometimes there was a little fight before a show, but we didn’t split up. But we were also nice to each other, everything was always supernatural. A lot of bands didn’t make it through all this unscathed and when you do, this is a true testament to our strength and character.”

In the weekly series “When I hitei”, pop artists reminisce about their heyday and tell how they are now. These are names that you may not remember, but when you hear the song you think “aaaah, that played a lot”.

Sharon Corr, violinist and singer of Corrs, in the 90s and in a recent photo of her solo career — Photo: Disclosure/Facebook of the artist

Although they are a quartet, it all started as a duo. Sharon sang and played the violin, while Jim played guitar or piano. In the 1980s, they performed at their aunt’s pub. The bar was called McManus, in the town where they grew up, in Dundalk, Ireland. “One of the things that defined our music was having that very unusual flavor of Celtic music in the sound.”

Since that time, Sharon had been fond of unconventional chord progressions and tried to bring that to Corrs. “It adds a lot of flavor and nuance,” she says.

“It reflects life better, because life doesn’t happen with chords in a straight line and we have a tendency to clean everything up. I find these chords weird, diminutive, darker… truer in a lot of ways and I love that. You knows when it gets dark and then turns on the light.”

“If you listen more deeply to our albums and not just the singles, you’re going to hear a little more of that truer aspect, that aspect of life, the nuances and maybe a little bit of the darker side.”

Jim, Caroline and Sharon and Andrea Corr: The Corrs brothers in the 90s — Photo: Publicity/Universal Music

This slightly darker side is in the first Corrs song that caught the most attention. It was “Runnaway”. But no song of theirs was as successful as “Breathless”, from 2000. Before that, the band released another 15 singles and some were successful, like “Only when I Sleep”, from 1997.

In addition to the strength of this pop with violin and love lyrics, Corrs knew how to hang out with the right people. They had support from artists like Celine Dion, who invited them to open for her tour in 1996. “This was a great opportunity because we were exposed to a much larger audience than we could have reached at the time. It was great to do so many shows with Celine across Europe.”

The big turning point for the band, however, came from the partnership with South African producer Robert John “Mutt” Langeknown for working with ex-wife Shania Twain.

“I remember that Mutt is a great guy, but he’s an executioner when it comes to recording backing vocals. We had to repeat it like 40 times. We used to record until very late, and we’d have a glass of wine and relax. he knew how to relax, which was a good thing, it wasn’t just a job.”

Andrea, Jim, Caroline and Sharon Corr: the brothers of The Corrs — Photo: Disclosure/Facebook of the band

Among other radio ballads, Mutt Lange wrote “(Everything I Do) I Do It for You”, in collaboration with the ballad’s performer, Bryan Adams, in 1991.

With Corrs, Lange wrote and produced the band’s major hits, including “Breathless” and “All the love in the world”. This ballad played on radios and in the movie “America’s Darlings” (2001)romantic comedy with Julia Roberts, Catherine Zeta-Jones, John Cusack and Billy Crystal.

The quartet is associated with romantic comedy and romantic ballads, but Sharon guarantees that Corrs has not-so-romantic influences. “I have bands that I’ve been very influenced by, Pink Floyd, Led Zeppelin… they’re largely complex.”

In 2021, Sharon released a solo album called “The fool and the scorpion”. The sound is similar to Corrs, but the lyrics are more intense and personal. She talks about what she felt when she broke up after an 18-year marriage.

“I was lying in bed and I was in one of those moments where I didn’t want to get out of bed. I was hiding under the covers, like a little girl, waiting for everything to go away. I’m a very strong woman, but I’m also a very strong woman. fragile.”

“I can be very vulnerable and I was feeling like I just needed to take the hand of the little girl that lives inside me. We all end up crying in supermarkets and bathrooms and I don’t know where else… and that doesn’t matter. I’m not afraid of being a human being, I think if you share your vulnerability it opens the way for everyone to share their vulnerabilities, you know?”

The Irish quartet Corrs — Photo: Disclosure/Facebook of the band

This freedom she talks about appears in other lyrics from her solo career. As in “Running On Rooftops”, which exposes the backstage of the band, which she always seemed super behaved:

“This song is me remembering the old days on tour, many years ago. Maybe we drank a little too much, you know? You wake up the next morning and think… ‘Oh my God, I need a hospital, I need a meds’. It’s a song where I’m laughing at myself.”

She also said that she wants to return to Brazil, and it could be for solo shows or for a possible return of Corrs, not yet confirmed. In 2013, she recorded a DVD in São Paulo. “I remember our very talented Brazilian musicians who played with me. It was magical. The love you get from the Brazilian audience is phenomenal. I remember I was even nervous.”

Returning to Brazil would be a chance to shake up her peaceful life. Today, Sharon lives in Madrid with her two daughters, who are 16 and 14 years old. “I take care of my daughters, go out with friends and walk around this beautiful city… that’s kind of my life.”