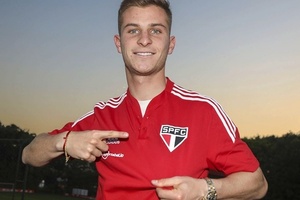 São Paulo announced yesterday (26) the arrival of Argentine midfielder Giuliano Galoppo, 23 years old. According to UOL EsporteTricolor will pay Banfield around 6 million euros (R$ 32 million), which must be paid over six months.

Galoppo, with that, is the most expensive reinforcement in the club’s history in absolute values, exceeding the R$ 27 million paid to bring Pablo from Athletico-PR, in 2019.

Does the promise of Banfield have a good chance of becoming the highlight of São Paulo? The column heard Banfield coach Claudio Vivas and two former teammates of Galoppo to outline what the São Paulo fan can expect from him right now.

“Great teammate! We had beautiful moments together, being able to share the routine of training, games and concentrations with him was a great pleasure, we got along very well”, commented midfielder Nico Domingo, 37, captain of Banfield, former Galoppo team.

(The São Paulo fan certainly remembers him: Nico Domingo was the River midfielder who took a “pen” from Paulo Henrique Ganso in the 2016 Libertadores.)

“In addition to being a coach, Giuliano was super disciplined, liked to follow the guidelines to the extreme, then analyzed himself, looked for videos… it’s no wonder he evolved so fast and managed to stand out.”

“Anyone who follows football knows how very competitive everything is and how difficult it is for someone to stand out. And that he is at this level is a sign more than technique or skill, but delivery.”

Another who follows similar reasoning is defender Luciano Lollo, who recently also left Banfield. He left the team from the south of Buenos Aires for Estudiantes de La Plata.

“Galoppo was always very mature. Talking to him was like exchanging ideas with a real adult, not a young man at the beginning of his career. Focused, decisive, always looking for the best for the group”, he summarized.

“Our relationship was one of the best. He was always close to the experienced people to know, to see how it was done, always trying to help, always close to us and [Jesús] Datolo. This conduct is essential to succeed in your career and in life.”

Galoppo’s coach at Banfield, Claudio Vivas was Marcelo Bielsa’s assistant in the Argentine national team. He lived with promising youngsters like Tevez, D’Alessandro and Mascherano, and was part of the coaching staff that won gold at the 2004 Olympics, with 100% victories.

“In the relationship between the coach and the player, the two need to convince themselves of what they are doing, that it is the best thing for the group”, commented Vivas, about Galoppo.

“Giuliano’s sequence with us shows that he was always aligned with the collective interests. His own style of play is a demonstration of that, being able to do several functions well.”

“Of course, context matters a lot in football. Many things need to flow for a certain result to appear. It’s impossible to make any prediction. transfers and incorporations. What can be said is that such moves are the crowning of years of dedication. And I could see up close how dedicated Giuliano was.”

Galoppo played 27 games for Banfield in the 2022 season, being the team’s top scorer, with eight goals, even though he was characterized more by playing than by finishing.